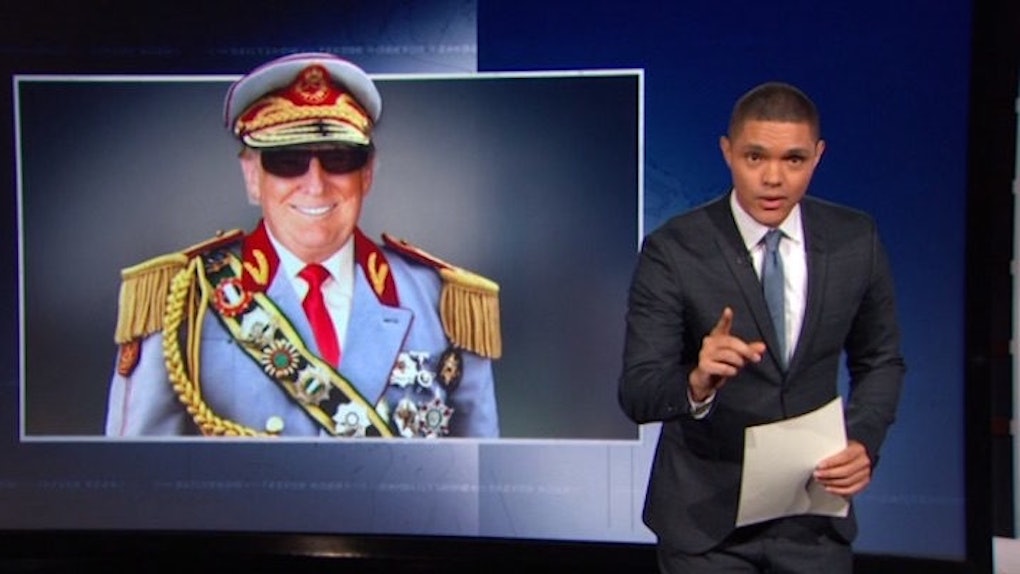 He's refusing to participate in Thursday night's GOP presidential debate. He essentially objected to it due to the fact he doesn't get along with one of the debate's moderators, Megyn Kelly of Fox News.

In an earlier debate, Kelly called Trump out for statements he made that were arguably misogynistic. The real estate mogul did not appreciate this, and it prompted an ongoing dispute between him and Kelly.

The decision not to participate in the debate is extremely unconventional, but hardly surprising, from a candidate running on a platform of saying "f*ck you" to the traditional way of doing things.

The Trump campaign released a statement on the debate that said,

Unlike the very stupid, highly incompetent people running our country into the ground, Mr. Trump knows when to walk away... He will not be participating in the FOX News debate and will instead host an event in Iowa to raise money for the Veterans and Wounded Warriors, who have been treated so horribly by our all talk, no action politicians. Like running for office as an extremely successful person, this takes guts and it is the kind of mentality our country needs in order to Make America Great Again.

Trump also took to Twitter to rant about Megyn Kelly and his decision to skip the debate.

I refuse to call Megyn Kelly a bimbo, because that would not be politically correct. Instead I will only call her a lightweight reporter! — Donald J. Trump (@realDonaldTrump) January 27, 2016

The "debate" tonight will be a total disaster - low ratings with advertisers and advertising rates dropping like a rock. I hate to see this. — Donald J. Trump (@realDonaldTrump) January 28, 2016

On Wednesday night, Trevor Noah addressed these developments in one of his best segments yet on "The Daily Show."

Noah hit the nail on the head when he explained the motives behind Trump's debate debacle. He said,

Once again, ladies and gentlemen, Donald Trump has won the only fight that matters to him — the fight for attention. Taking part in one more debate wasn't going to help Donald Trump get that much press. But blowing one off? That's like Deflategate crossed with a natural disaster crossed with a celebrity sex tape.

Indeed, regardless of whether or not you agree with Trump's politics, you can't argue with the fact Trump's done a masterful job of dominating media coverage by continuously inciting controversy. And, in many ways, this strategy sustained his popularity and even bolstered his campaign.

He's always in the news and always on people's minds, and it seems many appreciate his anti-establishment demeanor and rhetoric.

This is hard for some to comprehend given Trump also makes statements and proposes policies one might characterize as xenophobic and bigoted.

But, Noah put it all into perspective by providing a very appropriate parallel to Trump: Yoweri Museveni, the president of Uganda for the past 30 years.

Museveni is a dictator who's generated international condemnation for adopting strict anti-homosexual laws, among other regressive policies. He's currently running for his fifth term but didn't show up to the country's first presidential debate just one week ago... Sound familiar?

The giant ego, the crazy sentiments, the huge and questionable fortune, the extremely casual relationship with facts... Donald Trump is basically an African dictator.

Watch the video of "The Daily Show" segment below.