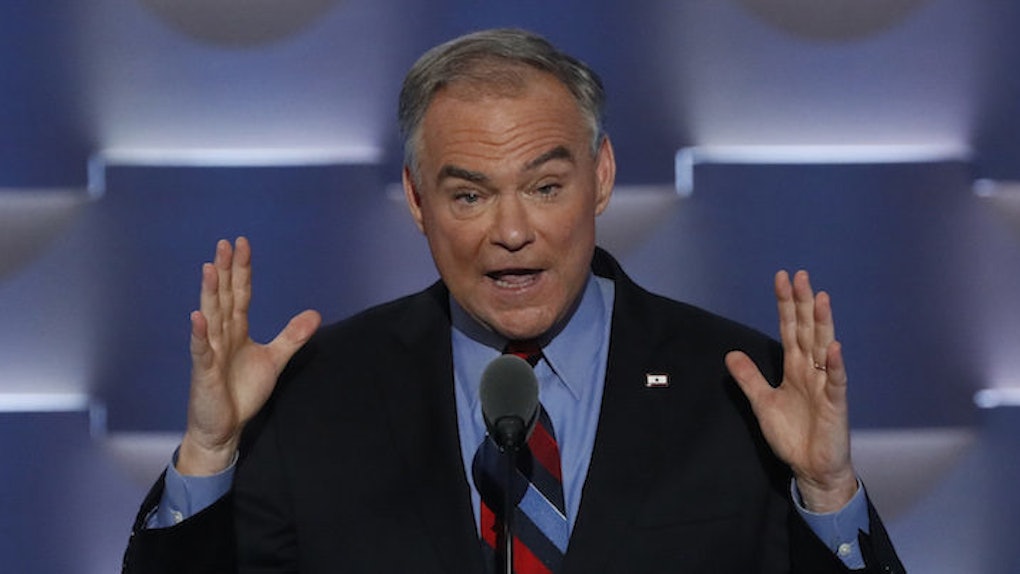 Senator Tim Kaine, who is running for vice president with Hillary Clinton, can't seem to make up his mind about the Hyde Amendment.

The Hyde Amendment stops the government from using federal funds through Medicaid for abortions -- except in the case of rape, incest and medical threats to the mother's life. As a result, the Hyde Amendment disproportionately affects women of color.

Medicaid covers low-income women, who are also generally at a higher risk of unintended pregnancies. This is for a number of factors including poor sex education and a lack of access to medical care and contraceptives.

As a recent study showed, teen women who have abortions have higher education levels and incomes compared to those who choose to give birth. This makes sense -- having a child when you are not prepared can disrupt your life pretty heavily. In this way, a lack of access to abortion because of the Hyde Amendment helps to reinforce a cycle of poverty.

Basically, the Hyde Amendment targets the most vulnerable women in America. That's not cool.

The Hyde Amendment was introduced in 1976, just three years after Roe v. Wade made abortion legal. It was pretty clearly done as a way to restrict access to abortion after access was opened up with Roe. It gets passed in Congress every year as part of the budget.

But this year, the Democratic party decided to make getting rid of the Hyde Amendment a part of its platform. Clinton has been saying throughout her campaign she is strongly against the Hyde Amendment, standing up for low-income women's rights to abortion.

Although Clinton's clear on her position, Kaine has not been doing such a great job.

Kaine, who is a strong practicing Catholic, has said he is personally against abortion. When he was governor of Virginia, he signed several bills restricting women's access to health care and abortion.

However, since Kaine was elected to the Senate in 2012, he has been politically for abortion rights. NARAL Pro-Choice America president Ilyse Hogue said in a statement,

While Senator Kaine has been open about his personal reservations about abortion, he's maintained a 100 [percent] pro-choice voting record in the US Senate.

In this way, Kaine is acting like an ideal politician. He puts his personal beliefs aside to protect the rights and freedom of the people he is sworn to represent.

This is not the only issue on which Kaine acts how a politician should always be acting. He personally disagrees with the death penalty, but he allowed several executions to happen while he was governor of Virginia. The New York Times described this as Kaine upholding the law as a politician although it tore at him as a person.

But Kaine's apparent stance on the Hyde Amendment does not help his case that he's fully for women's rights and social justice (or even the Democratic platform).

Earlier this week, spokespeople for the Clinton-Kaine campaign said Kaine told Clinton privately he supports her plan to end the Hyde Amendment.

But on CNN Friday morning, Kaine himself gave a different perspective.

Which makes it pretty clear, really, where he stands.

Abortion has finally become an open conversation in politics. This week at the Democratic National Convention, Planned Parenthood president Cecile Richards became the first person to use the word "abortion" on a DNC stage.

A day later, Hogue became the first woman to talk about her own abortion on a DNC stage.

With so much progress in both open discussion and policy adoption, it's disheartening to see Kaine backing away from bringing down legislation that takes away many women's rights to choose.

If he wants to show he's fully for women -- particularly low-income women and women of color -- Kaine needs to stand against the Hyde Amendment.