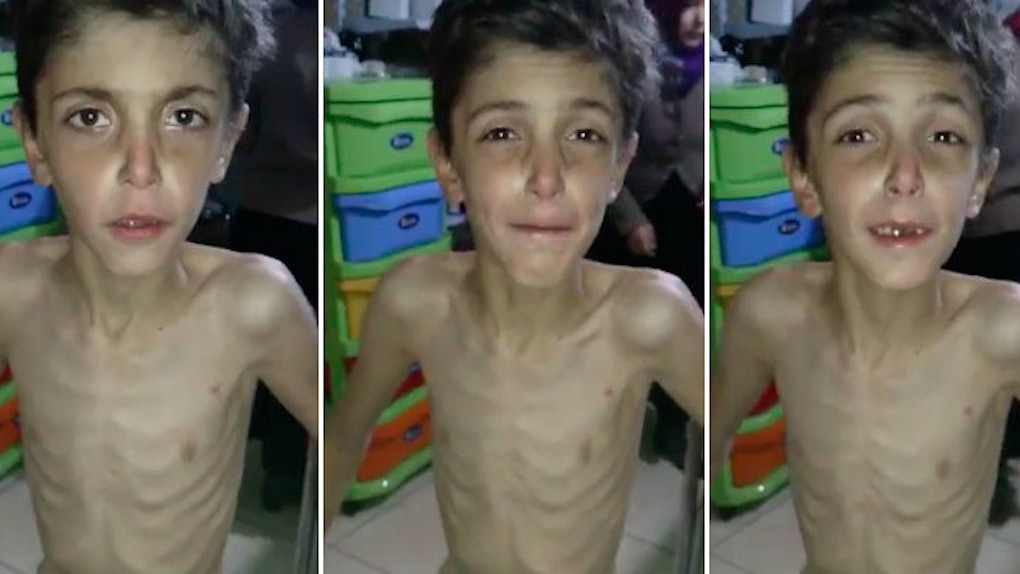 The rebel-held Syrian town of Madaya, located around 15 miles northwest of Damascus, has been besieged by government forces and their allies from the Lebanese Hezbollah militia since last summer. Consequently, many of its people are reportedly starving, severely malnourished and desperate for relief.

Heartbreaking images of emaciated children reportedly in the town emerged in the past several days.

Just got sent this video from a Dr who says he filmed this today in his clinic in the besieged town of #Madaya Syria pic.twitter.com/yxTvSS9A4E — Sophie McNeill (@Sophiemcneill) January 6, 2016

And this is the other video he sent me. Children, elderly, adults are starving he says #Madaya #Syria @sams_usa pic.twitter.com/KdG7Y0fmwt — Sophie McNeill (@Sophiemcneill) January 6, 2016

The situation in Madaya is so dire, medical professionals in the town told Al Jazeera people "were eating grass to stay alive." People there are apparently consuming anything they can find.

There are reportedly around 40,000 people in Madaya without access to food or medicine, and 300 children are suffering from malnutrition.

Carolyn Miles, president and CEO of Save the Children, said,

Food is being used as a weapon of war in Madaya and other besieged areas, and children are paying the price. It is appalling to see civilians being made to suffer in this way. Local humanitarian workers in the town are desperate to help, but they themselves have run out of food and medical supplies. If aid does not reach Madaya soon, we know that more children will die needlessly.

The UN also said it received reports people are not only dying from starvation, but being killed if they try to leave.

What's happening there is yet another reminder President Bashar al-Assad is responsible for an astronomical amount of suffering in his country.

On Thursday, the UN announced the Syrian government said it would allow aid to be delivered to the town. This is good news, but it does not excuse the numerous crimes against humanity the Assad regime already committed.

The Syrian civil war began in 2011. Since that time it's estimated over 250,000 people were killed and millions more displaced from their homes.

Unfortunately, it does not appear the conflict will cease any time in the near future, but that doesn't mean the international community can't do more to aid both Syrian civilians and refugees.