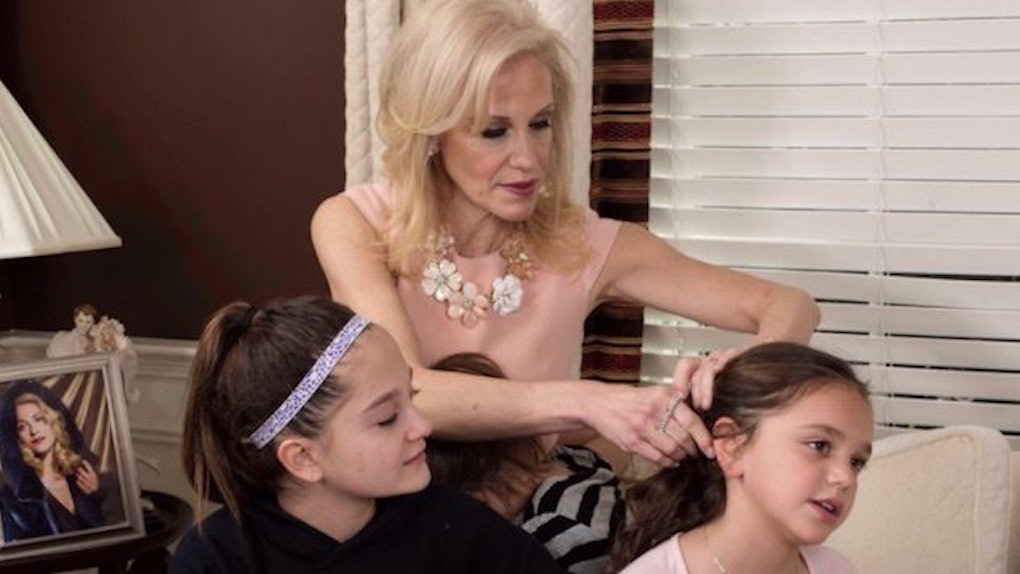 Bizarre Self-Portrait Of Kellyanne Conway Has Controversial Past

We've all had strange or embarrassing photos taken of us, most of which likely occurred when we were kids.

Thankfully, they're probably stashed away in dusty photo albums in our parent's living rooms.

For Kellyanne Conway, however, this is clearly not the case.

Someone discovered a self-portrait of her in the background of a recent photo, and it's, well... bizarre.

Look at the photo. Notice anything strange in the background?

Does this remind you of anyone?

This reaction sums up pretty much how everyone feels about this.

But of course, people had to add weigh in with their own thoughts...

Conway's weirdness would probably be somewhat endearing if she wasn't ruining the country by habitually spreading lies, untruths and straight-up nonsense whenever she appears on the news.

The photo is from the 2009 edition of the Clare Boothe Luce Policy Institute's annual conservative women calendar, which was dubbed "Pretty In Mink."

This calendar was obviously meant to rile up liberals and animal rights activists.

Conway was Miss January, and the caption by her photo says,

If there were a queen of polling, Kellyanne Conway would be it. One of the most quoted pollsters in the nation, Kellyanne is president and CEO of The Polling Company, Inc., and is the author of What Women Really Want. Kellyanne is wearing a navy sheared beaver jacket with fox trim and detachable hood from Miller's Furs.

The description for the calendar states,

Following in the tradition of past calendars from the Luce Policy Institute, Pretty in Mink celebrates smart, conservative women role models ... with flair. We took your some of your favorite leaders of today's conservative movement on a journey back in time, and made them up into glamorous movie stars of classic Hollywood. Back when the big screen was a little more glamorous, women were a little more feminine, the men a little more charming — and the world a little less politically correct.

This is some solid, old-fashioned sexism for you, and the theme kind of goes hand-in-hand with "Make America Great Again," which might as well be "Make America 1952 Again."

So, not that we needed it, but we have even more proof Kellyanne Conway is the antithesis of what it means to be a feminist.