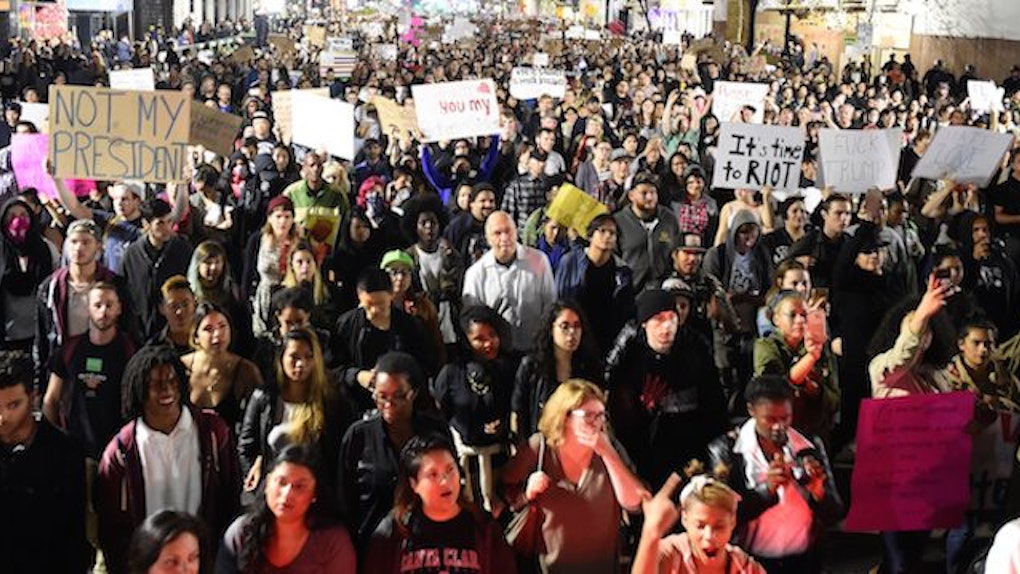 The day many people across America have been dreading finally arrived.

Today, Donald Trump will be sworn in as the next president of the United States.

However, it appears some of Trump's haters aren't going down without a fight.

Last night, anti-Trump protesters took to the streets of Washington, DC, to express their disdain for the president-elect.

A large crowd of chanting protesters gathered outside of the National Press Club, where Trump supporters were hosting the DeploraBall.

However, things took a terrifying turn when demonstrators started to get out of hand.

Scary videos showing Donald Trump protesters getting pepper-sprayed by police on the eve of the presidential inauguration have surfaced all over social media.

FOX News reports James Allsup, a 21-year-old Trump supporter who did not even attend the event at the National Press Club, says the demonstration turned violent when one of the protesters attacked him with a flagpole.

I was wearing my 'Make America Great Again' hat, and a white male came up behind me and swung at me with a flagpole - I kind of blacked out for a minute. Before I knew it my head was gushing blood - there's blood on my Trump hat.

Allsup shared a picture from the protest on Facebook showing him sitting on the ground with his bloody hand held out in front of him.

However, protesters claim they were not violent during the demonstration.

Anti-Trump demonstrators and Trump supporters took turns confronting each other on the streets throughout the evening.

Plus, police got an unpleasant surprise when another group of pop-up protesters attempted to surround the Trump International Hotel.

Videos captured a crowd of about 200 protesters marching toward the hotel as they chanted things, like, "Let us through," and, "The whole world is watching," and displayed banners that dubbed the Trump administration as "illegitimate" and "Fascist."

Cops first arrived at the chaotic scene on bicycles and created a human barricade to stop protesters from reaching the hotel.

While most of the Trump family was attending the Make America Great Again Welcome Celebration concert at the Lincoln Memorial during the demonstration, it is believed Trump's 10-year-old son, Barron, was inside the hotel.

The crowd of protesters broke through barricades outside the hotel, then chanted, "No KKK. No Fascist USA" for several minutes before dispersing.

According to The Washington Post, riot police bombarded a crowd of Trump protesters with "chemical spray" after demonstrators started throwing trash at people leaving the DeploraBall.

This is to build up momentum and mobilize people so that whatever shit is coming down the pipe with Trump and Pence - their regime - we need to be ready. The alt-right's vision for this country is not the one that we need. I'm out here tonight because I want to be part of the resistance efforts happening this week, and the resistance that'll be happening the next four years.

A spokesperson for the Metropolitan Police Department says no protestors were arrested. However, police are bracing themselves for more demonstrations as Trump takes office.

Citations: Anti-Trump protesters are pepper-sprayed by cops during violent clashes at 'Deploraball' party for Donald's supporters in Washington DC (DailyMail.com)