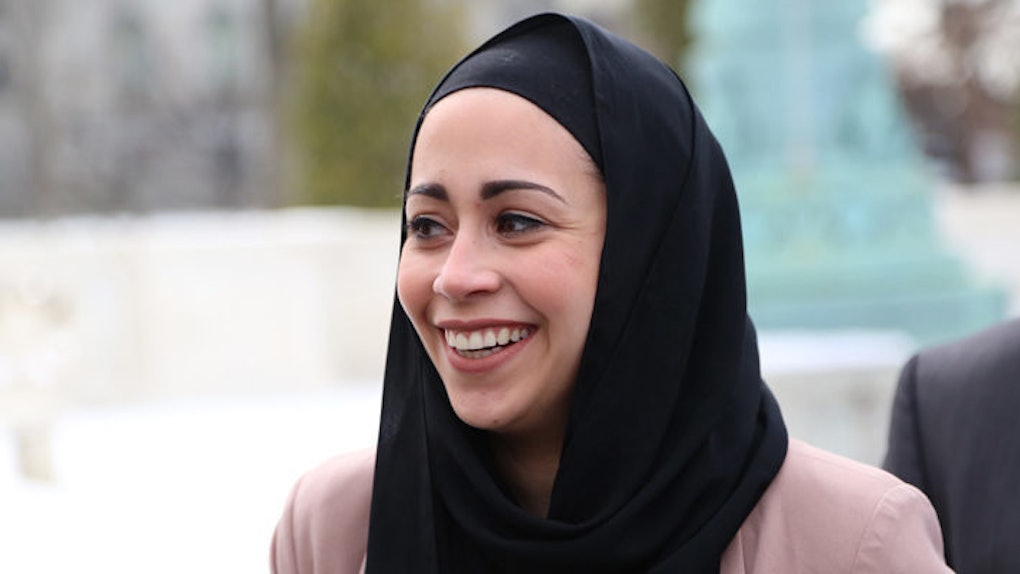 What The Abercrombie & Fitch Ruling Means For American Muslims

In the summer of 2013 in Hammamet, Tunisia, my friend Adnen and I were transporting smuggled perfumes and lotions to a female contact at a cafe.

This young woman, with beautiful eyes framed by her bright red hijab, would then sell the items to rich women in a nearby affluent neighborhood.

Before we left, I asked her why she wore the hijab.

I didn't always wear the hijab. And I used to spend a lot of time at the clubs. I started wearing it recently because I wasn't happy with myself. I was lost as a person, and I wanted to reconnect with myself, my family and my faith. I wear it because it's source of strength.

A year earlier, in Indonesia, the head of the English department and my boss took meticulous care in accessorizing her hijab with different shapes of silver.

In addition to her devout practice, she told me,

Though strict laws in some foreign lands force Muslim women to cover up, American Muslims are lawfully and rightfully able to express their religion as long as it doesn't hurt anyone or cause undue hardship.

The freedom to wear a hijab without fear is what gives America its stripes and stars.

On Monday, June 1, the Supreme Court reaffirmed this ideal when it ruled in favor of Samantha Elauf, an American Muslim. Since 2008, Elauf has been the force behind an Equal Employment Opportunity Commission (EEOC) discriminatory lawsuit against Abercrombie & Fitch.

When announcing the decision from the bench, Justice Antonin Scalia said,

This is really easy.

According to the opinion of the Court, Elauf applied for a position in an Abercrombie store in Tulsa, Oklahoma in 2008. The store's assistant manager, Heather Cooke, evaluated Elauf and gave her a rating that qualified her to be hired. Yet, Cooke was concerned Elauf's hijab would conflict with Abercrombie's “Look Policy.”

The Look Policy is a familiar one, notorious for its preppy “classic East Coast collegiate style." Among other things, the policy specifically forbids “caps," but vaguely defines the term.

After the interview, Cooke sought counsel from district manager Randall Johnson, who stated the hijab did violate the store's Look Policy, and directed her not to hire Elauf.

This formed the foundations for the 7-year struggle. On behalf of Elauf, the EEOC sued Abercrombie & Fitch.

A District Court initially ruled in favor of Elauf, but a Tenth Circuit later reversed the ruling.

According to the New York Times, Judge Jerome A. Holmes wrote for the appeals court,

Ms. Elauf never informed Abercrombie before its hiring decision that she wore her head scarf, or 'hijab,' for religious reasons.

However, after Monday's Supreme Court ruling and according to Scalia's written Opinion of the Court,

An employer may not make an applicant's religious practice, confirmed or otherwise, a factor in employment decisions.

So, when Cooke saw Elauf in her hijab and rightfully suspected she was Muslim, Cooke should have noted the religious practice of wearing a hijab is not the same thing as wearing an informal “cap.”

Religious practice is also not the same as what Johnson allegedly told Cooke when she first brought up her concern, saying,

You still can't hire her because someone can come in and paint themselves green and say they were doing it for religious reasons.

The clear and “easy” 8-1 ruling has resulted in some criticism.

Pamela Geller, known for being anti-Islamist, penned an article titled, “Why Would a Devout Muslim Want to Work at Abercrombie and Fitch.” It was published under the National Security tab with Breitbart News Network.

Why would Elauf want to work there? In order to force another major American business to accommodate Islamic norms – and this time, that sinister agenda won the aid of the United States Supreme Court.

Geller continues her opinion piece naming other incidents of American businesses adhering to Muslim principles, such as with Hertz, Star Transport, Planet Fitness and even Disney.

On the other side, as noted in a Washington Post opinion piece by Simran Jeet Singh, senior religion fellow for the Sikh coalition,

The Court's decision could shape how we think about pluralism and equal opportunity in this country. Government policies on religious freedom deeply influence what Americans perceive to be acceptable.

What is a Hijab to You?

Visible articles of faith are crucial elements of identity and self-expression, along with serving as a source of strength for many who identify with minority faith communities in the US.

But do members of a minority faith get little extra passes of freedom, such as with Elauf and her hijab?

A common argument coming out of this ruling is that Muslims should have to adhere to company policies just like the rest of us.

Abercrombie needed workers to abide by its Look Policy and not wear things on their heads.

An employer who needs employees to work Saturdays might not want to hire someone who observes the Jewish Shabbat. So, where does the religious element come into play?

It's a complicated question. For Singh,

Current policies on workplace discrimination have gaping loopholes that allow employers to not hire applicants on the basis of their appearance. Therefore, the American workforce does not accurately reflect or leverage the proud diversity of this nation.

But according to what I learned from my old boss in Indonesia as well as the smuggler in Tunisia, it's more about how we associate religious articles and the people who wear them.

Can we see the hijab as a fashion statement that coincides with an idea of beauty as well as a liberating force that allows some women to feel comfortable in their beliefs and identity?

Idea of beauty, belief, identity: Aren't those some of the same reasons we choose to wear Abercrombie & Fitch in the first place?