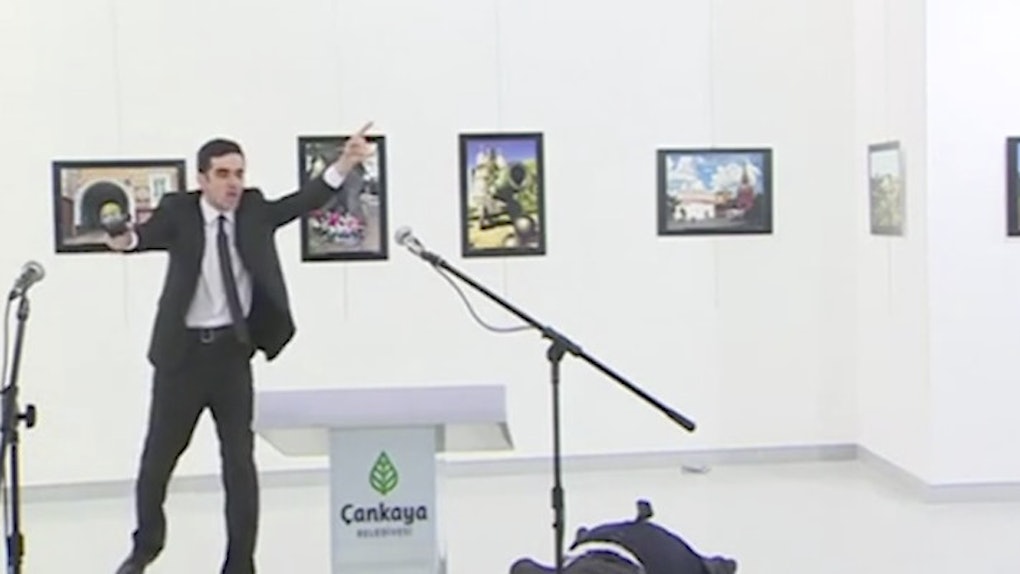 Fears Of WWII After Russia Ambassador To Turkey Killed

The Russian ambassador to Turkey, Andrey Karlov, was shot at an art exhibition in Ankara on Monday, CNN reports.

Karlov, who was giving a speech when he was shot, has died from his wounds.

According to reports, just before he opened fire, the gunman shouted,

We die in Aleppo, you die here.

The gunman, identified by Turkish media outlets as Mert Altintas, a 22-year-old riot policeman, has also been killed.

This video shows the ambassador's wife responding to the tragic shooting.

Between this fatal incident and the downing of a Russian warplane that crossed into Turkish airspace last December — among other issues —the relationship between Russia and Turkey is on shaky ground.

It's unclear what will come of this, but it's certainly very unsettling and could potentially have global ramifications. Some are going as far to say we're on our way to World War III.

Others feel this is unsettlingly reminiscent to the assassination of Archduke Franz Ferdinand in 1914, an event that directly led to the onset of WWI.

Turkey is a member of NATO and an important ally of the United States.

Theoretically, if Russia went to war with Turkey, the US and other NATO member countries would be obligated to respond and come to its defense.

But it seems unlikely Russia would go to war with Turkey over this, which foreign policy expert Ian Bremmer, among others, noted in a tweet.

The details surrounding Monday's incident aren't entirely clear yet, and it's not in anyone's interest for Russia, Turkey, the US or other NATO member countries for a global conflict, or "world war," to occur.

Such a conflict would not end well for anyone, as we've already witnessed in the past century.

Not to mention, there also were fears of a "World War III" occurring after the incident with the Russian warplane last year, and it didn't happen.

In short, it's probably safer to avoid jumping to conclusions about this and wait for more information to emerge.