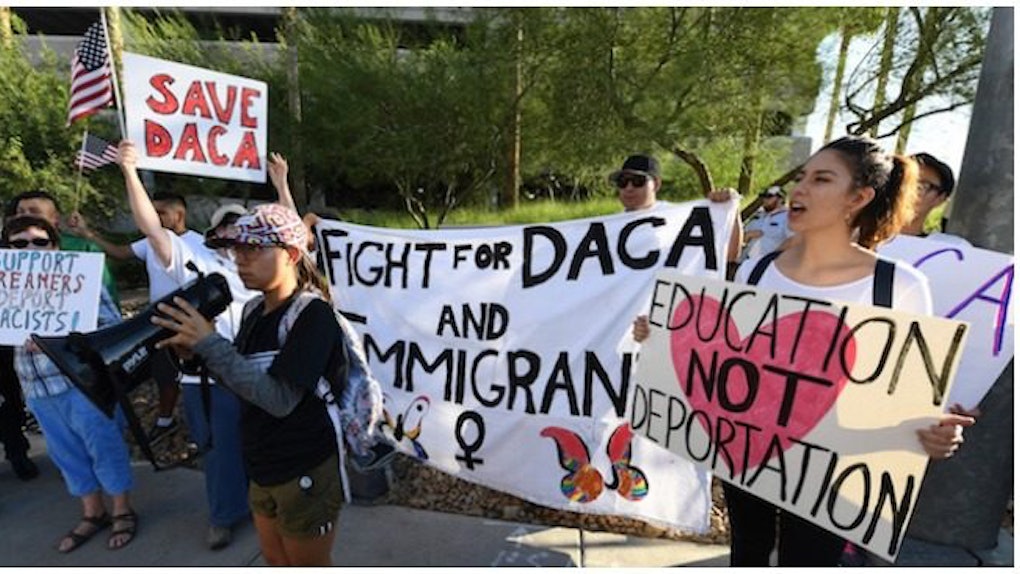 Succeed Act Vs. DACA: 3 Differences You Should Know About

On Monday, Sept. 25, Republican Senators Thom Tillis of North Carolina and James Lankford of Oklahoma unveiled a bill that, if passed, would give young undocumented immigrants known as "Dreamers" a path to citizenship -- but not without significant caveats. Dubbed the Succeed Act, the bill is Tillis and Lankford's attempt at replacing the Deferred Action for Childhood Arrivals (DACA) program after the Trump administration's announcement earlier this month that it would be ending the program in March 2018. But if you look at the Succeed Act versus DACA, it's clear that Succeed is not the answer which Dreamers are seeking.

While there are some similarities between DACA and Succeed, the biggest difference between the two programs is how strict Succeed is -- and how difficult it would make an already fraught situation. The Succeed Act would create a complicated 15-year path to citizenship, which DACA does not have. But it would also end a current law which allows green card holders to sponsor family members, like spouses or children, who seek permanent residency. So why is Succeed being introduced?

On Sept. 5, Attorney General Jeff Sessions announced that the Trump administration would seek to eliminate the DACA program, an Obama-era rule passed in 2012  that allowed a path to legal residence for undocumented immigrants who arrived in the U.S. as children.

In his speech, Sessions said that ending DACA would protect "communities and taxpayers" and save lives. He also said, "It will further economically the lives of millions who are struggling." (According to Forbes, CNN Money, and libertarian think tank the Cato Institute, however, ending DACA will cost thousands of jobs and upwards of $200 billion.)

Sessions gave legislators six months to come up with a solution (a sentiment which President Donald Trump echoed on Twitter). This is, according to Politico, Tillis and Lankford's means of allowing conservative lawmakers to support Dreamers while pushing for tougher immigration laws.

There are some similarities between Succeed and DACA.

But here is where the two programs diverge.

DACA requires applicants to be enrolled in high school or college, or serving in the military at the time they apply. They must have a clean criminal record.

Succeed, on the other hand, requires a "thorough" background check (which is not defined), including submitting biometric data to the Department of Homeland Security. Applicants must have a high school diploma, and if they owe taxes, either pay off back-taxes or develop a repayment plan. If Dreamers meet these requirements, they are given "conditional permanent residence," a 10-year limbo in which they must earn a college degree, serve in the military for at least three years, or be consistently employed. After meeting those requirements, eligible Dreamers may apply for a formal green card.

After receiving green cards, Dreamers have to wait another five years before they're eligible to apply for citizenship. This 15-year timeline, of course, is a best-case scenario, barring any bureaucratic slow-downs or unforeseen circumstances.

Additionally, the bill would end a law that allows green card holders to sponsor close family members, such as spouses or children.

The bill would also take a hard line on temporary visa holders, such as those with worker or student visas. In order to be eligible for temporary visas, applicants would have to "sign a waiver that would otherwise grant them an immigration hearing or other immigration-related benefits if they violate the terms of their visa."

So, even if a visa holder had a no-fault violation or was a first-time offender, they would have waived their right to a hearing in order to procure the visa in the first place. In short, visa holders would have little to no ability to fight against a possible deportation.

DACA is a wildly popular program, with 82 percent of Americans who say they want it to continue, according to CNN. Despite overwhelming support for immigration reform to protect childhood arrivals to the U.S., and numerous attempts to pass the immigration reform bill the DREAM Act since it was first introduced in 2001, the fight for amnesty has been fraught with failures -- largely due to threatened filibusters from immigration hardliners. The failure to pass a more comprehensive version of DACA, then, is not necessarily a reflection of what constituents want, and Succeed is not the compassionate solution which Americans seek.

The Succeed Act isn't so much a compromise as it is creating a torturously complicated program which would likely discourage undocumented individuals from coming forward. It also seems needlessly cruel to remove the ability of green card holders from sponsoring family members. If you want legal immigration, why discourage this program?

DACA isn't perfect. But it has allowed over 800,000 individuals to step out of the shadows and participate in the U.S. without fear of being deported from what is, for many Dreamers, the only home they've ever known.