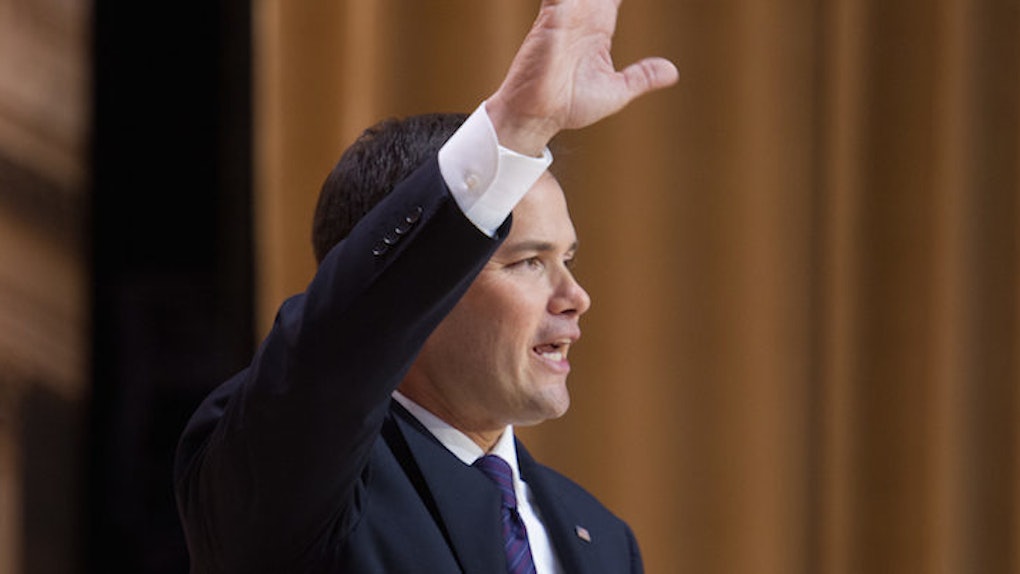 If you watched Wednesday night's CNBC Republican Debate, you were probably expecting the same old responses from the top 10 candidates.

However, thanks to some cringe-worthy questions from the moderators and squabbling amongst the contenders, voters may have gotten their best glimpse yet of just exactly who they'll be electing next November.

Marco Rubio, the junior Senator from Florida, emerged from the fray as a strong contender, even eclipsing his one-time mentor Jeb Bush.

Still, his win was not without some bumps and bruises.

Here's what he got right, and here's where he went wrong:

The 44-year-old Republican darling showed an endearing earnestness and belief in the American people.

When asked what his greatest weakness was, a question posed to all the candidates (and unanswered by some), Rubio replied:

I would begin by saying that I'm not sure it's a weakness, but I do believe that I share a sense of optimism for America's future that, today, is eroding from too many of our people.

He went on to reiterate that America's best days are ahead. It was a refreshing contrast to the tone of many other candidates on the stage, who had more negative things to say than positive.

Rubio also demonstrated an unwillingness to engage in attacking his compatriots, despite some opportunities to do so.

For instance, when Jeb Bush joined in on criticizing his mentee's absences in Senate votes, Rubio turned the criticism around. Rubio said Barack Obama and John McCain missed just as many votes when they were campaigning, so where was Bush's criticism then?

Bush muttered some incomprehensible response, but the crowd didn't hear it. They were too busy cheering.

In other words, Bush went on the attack and got owned in the process.

Moderator Becky Quick asked why the senator felt he could manage a $17 trillion economy after his own share of financial woes: liquidating a $68,000 retirement plan after getting a million-dollar book deal, and foreclosing on his second home.

I know for a fact how difficult it is to raise children, how expensive it's become for working families. And I make a lot more than the average American.

This could ring really hollow with Americans. Rubio likes to position himself as the son of a bartender and maid, yet even after a million dollar book deal, which Rubio shamelessly advertised during the debate, he still seems to be having some financial problems.

Instead of making him seem more relatable, this could alienate himself from voters who are raising families on less, with better results.

Like it or not, his adversaries may have a point when they argue someone in his position should not be at the helm of the greatest economy in the world.

Yeah, but that -- because the math is, if you -- 5 percent of a million is a lot more than 5 percent of a thousand. So yeah, someone who makes more money ... numerically, it's gonna be higher.

In this economy, the last thing the American people want to hear is that after-tax income for the top 1 percent is going to go up, especially in an arena where candidates on the Democratic side are promising to close the income inequality gap.

He's young and optimistic about the future of America, something that resonates with this generation.

Only time will tell if last night's performance was enough to catapult him to first as he seeks to unseat Donald Trump and Ben Carson for the lead.