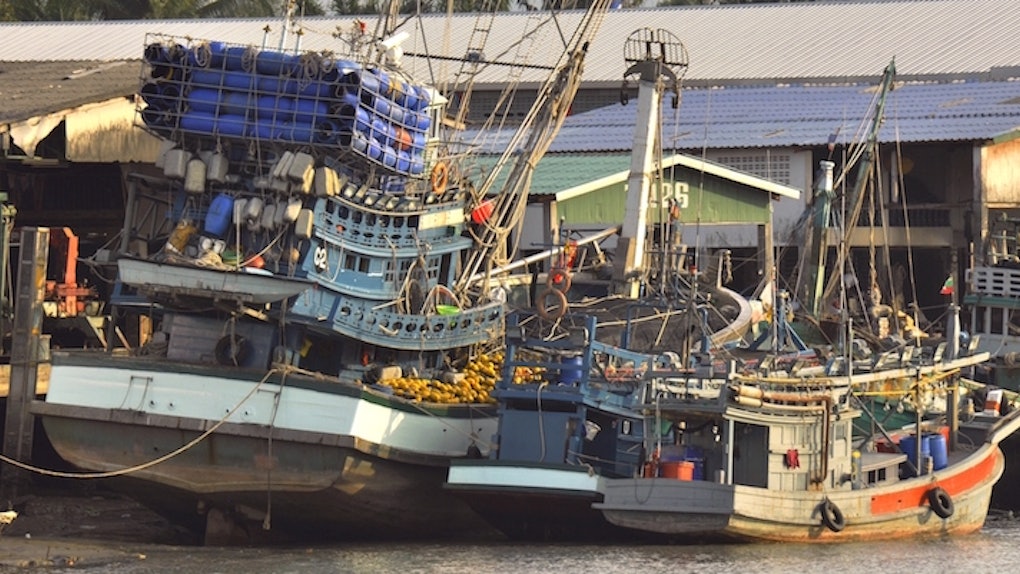 It's an unfortunate fact humans have not evolved to a point where they no longer engage in the abhorrent practice of slavery.

Since the dawn of civilization, people have captured or coerced others and forced them into various forms of bondage and exploitation.

In spite of all our societal and technological advancements, our species has yet to abandon this crime against humanity.

Today, people are trafficked for forced labor and sex all over the globe.

The International Labor Organization estimates there are around 21 million victims of human trafficking around the world, contributing to an illegal industry that generates $150 billion annually.

A great deal of these profits provide a solid source of income for various organized crime and terrorist groups.

Many everyday products are connected to this disgusting form of modern-day slavery.

If you're currently eating a chocolate bar, for example, there's a chance child slaves helped cultivate the cocoa necessary for it.

And if you're feeding your cat pet food containing seafood, it might have been fished by slaves.

It might even be fair to say many American pets live far better lives than the individuals enslaved on the boats that help provide their food.

The Thai fishing industry is one of the worst culprits of human trafficking. Many of the victims are men and boys from places like Cambodia and Myanmar.

They're tricked into crossing the border by traffickers promising gainful employment.

But they ultimately find themselves placed in captivity under the watch of armed men and subsequently forced to work under torturous conditions on Thai fishing boats in the South China Sea.

As the New York Times notes, the abuse these individuals endure is exceptionally barbaric:

In interviews, those who fled recounted horrific violence: the sick cast overboard, the defiant beheaded, the insubordinate sealed for days below deck in a dark, fetid fishing hold. ...Often they are beaten for the smallest transgressions, like stitching a torn net too slowly or mistakenly placing a mackerel into a bucket for herring.

Recounting his ordeal, a trafficked fisherman named Samart Senasook, who spent six years at sea as a slave, told CNN,

There were times I was about to jump into the sea to kill myself.

If you're wondering why this appalling practice has been allowed to continue, much of the problem lies in the fact the Thai economy has improved in recent years while the global demand for fish has continued to increase.

This has led to an immense labor shortage in the Thai fishing industry, as it's becoming increasingly difficult to attract people to the backbreaking and often dangerous work on the boats.

Consequently, the industry has been forced to rely on migrant workers from Myanmar, Cambodia and Laos to accommodate the labor shortage.

The Thai government claims these migrants make up around 80 percent of the 145,000 workers on around 57,000 registered fishing boats.

But the Thai fishing industry is not subject to a great deal of oversight, and it's estimated this has allowed for the existence of around 200,000 trafficked workers on thousands of unregistered boats or "ghost ships."

You and your cat might be eating slave-produced seafood.

The boats forced laborers work on often catch forage fish, which frequently end up in canned pet foods for cats and dogs, or in feed for livestock.

After the fish are caught, they're typically sent to canneries owned by Thai Union Frozen Products, Thailand's largest seafood company.

According to the New York Times, the company shipped more than 28 million pounds of seafood-based cat and dog food for many of the most popular brands found in the US over the course of the past year.

These include Iams, Meow Mix and Fancy Feast.

The average American cat eats double the amount of seafood as humans per year, or about 30 pounds. Concurrently, it's estimated around 70 to 80 million dogs and 74 to 96 million cats are owned in America.

All of this might help explain why the US is the Thai seafood industry's top customer, and pet food is currently one of Thailand's most rapidly growing industries.

It's also not just cat food this slave labor-produced seafood is ending up in.

Thailand is the third largest exporter of seafood in the world and, according to a yearlong AP investigation, a portion of the seafood we purchase in grocery stores and restaurants is also a product of slave labor.

As the report puts it:

Tainted fish can wind up in the supply chains of some of America's major grocery stores, such as Kroger, Albertsons and Safeway; the nation's largest retailer, Wal-Mart; and the biggest food distributor, Sysco. It can turn up as calamari at fine dining restaurants, as imitation crab in a California sushi roll or as packages of frozen snapper relabeled with store brands that land on our dinner tables.

The Thai seafood industry generates around $7 billion annually, earning around $2.5 billion in exports to the UK and US alone, profits all linked to the enslavement of other human beings.

With that said, one wonders how many Americans are aware the seafood both their pets and they themselves are eating might be products of slave labor and the torture and death of other humans.

As Hlaing Min, 30, a runaway slave from Indonesia stated to AP:

If Americans and Europeans are eating this fish, they should remember us. There must be a mountain of bones under the sea... The bones of the people could be an island, it's that many.

If the US public isn't cognizant of the scale of the problem, it at least appears the government is.

It's up to all of us to combat human trafficking.

In a report on human trafficking released by the US State Department on Monday, Thailand was ranked as one of the worst countries in the world in terms of its efforts to combat the practice.

The government of Thailand does not fully comply with the minimum standards for the elimination of trafficking, and is not making significant efforts to do so. [Thailand is] a source, destination, and transit country for men, women, and children subjected to forced labor and sex trafficking.

While it's true Thailand has laws against human trafficking, it's notoriously inept at enforcing them.

If the US government sincerely desires to make an impact, it could choose to impose economic sanctions on Thailand until the country changes its ways.

President Obama has three months to make a decision in this regard following this report.

But as Paul Chambers, a lecturer in international relations at the Thai-based Institute of South East Asian Affairs, told the Wall Street Journal, the language of this new report is largely rhetorical and it's unlikely the US government will actually take substantive action.

Given human trafficking is driven primarily by greed, market pressure is debatably the only factor that will really change things.

Consumers in America, and around the world for that matter, arguably have an obligation to refuse to buy seafood products and other goods unless they know they have no connection to slave labor.

Citations: Thailand Disputes Its Human Trafficking Designation (WSJ), Trafficking In Persons Report (State Dept.), SEA SLAVES THE HUMAN MISERY THAT FEEDS PETS AND LIVESTOCK (NYT), Are slaves catching the fish you buy (AP), Seafood from slavery Can Thailand tackle the crisis in its fishing industry (CNN), ILO says forced labour generates annual profits of US 150 billion (ILO), New ILO Global Estimate of Forced Labour 21 million victims (ILO), How many pets are in the United States How many animals are in shelters (APSCA), Are slaves catching the fish you buy (AP)