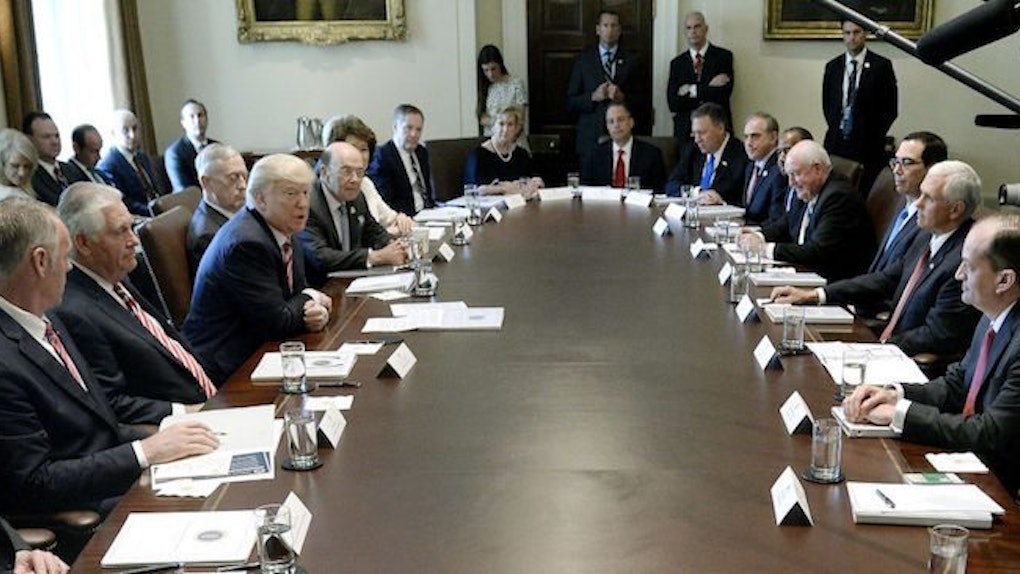 Who Is Ralph Drollinger? Trump's Bible Study Leader Has A History

Every single week, roughly a dozen members of President Donald Trump's cabinet meet for a Bible study, according to the Christian Broadcasting Network (CBN). Education Secretary Betsy DeVos, Energy Secretary Rick Perry, Health and Human Services Secretary Tom Price, and CIA Director Mike Pompeo reportedly attend the study regularly. Vice President Mike Pence attends the study when he can, and Trump is given a copy of the scripture teaching each week, according to CBN.

The study is led by Pastor Ralph Drollinger, a former NBA player and the founder of Capitol Ministries, who has a troubling history.

Drollinger, who reportedly compares Trump to biblical heroes, has generated controversy in the past over remarks he's made about women, Catholics, and homosexuality.

In 2004, Drollinger suggested women lawmakers who have young children at home are sinners. At the time, according to the Los Angeles Times, he wrote in a Bible lesson,

It is one thing for a mother to work out of her home while her children are in school. It is quite another matter to have children in the home and live away in Sacramento for four days a week. Whereas the former could be in keeping with the spirit of Proverbs 31, the latter is sinful.

According to the Los Angeles Times, this came just a few months after Drollinger generated outrage by referring to Catholicism as "one of the primary false religions of the world."

On this subject, it's worth noting Pence is Catholic, and one wonders if he's aware of Drollinger's past remarks. Elite Daily reached out to Pence about this, but did not hear back at the time of publication.

In the present day, Drollinger seemingly has nothing but nice things to say about the Catholic vice president who occasionally attends his study. Speaking with CBN, Drollinger said, "Mike Pence has uncompromising biblical tenacity and he has a loving tone about him that's not just a noisy gong or a clanging cymbal."

Beyond women and Catholics, Drollinger has also attacked homosexuals. During an interview with Sacramento News and Review in 2005, Drollinger said "Homosexuality is a sin," and an "abomination in the eyes of God."

This isn't the first time a religious leader with a controversial past has been linked to Trump.

One of Trump's most vocal supporters is Jerry Falwell Jr., the president Liberty University, a fundamentalist Christian institution.

Falwell Jr. has also generated his fair share of controversy. In December 2015, after the San Bernardino shooting, he encouraged students to take a free concealed-weapons course at Liberty University. In doing so, Falwell said,

If more good people had concealed-carry permits, then we could end those Muslims before they walked in and killed them... Let's teach them a lesson if they ever show up here.

Liberty University has allowed students, faculty, and staff who have gun permits to carry concealed weapons since 2011, and it ended a ban on firearms in residence halls in December 2015.

Falwell was very supportive of Trump during the U.S. presidential campaign, and has continued to stand by him. He was recently appointed by Trump to head a White House education reform task force, according to what an official told The Chronicle of Higher Education.

In short, it seems the White House is very comfortable with cozying up to religious leaders with views that would likely raise alarms among many progressives.