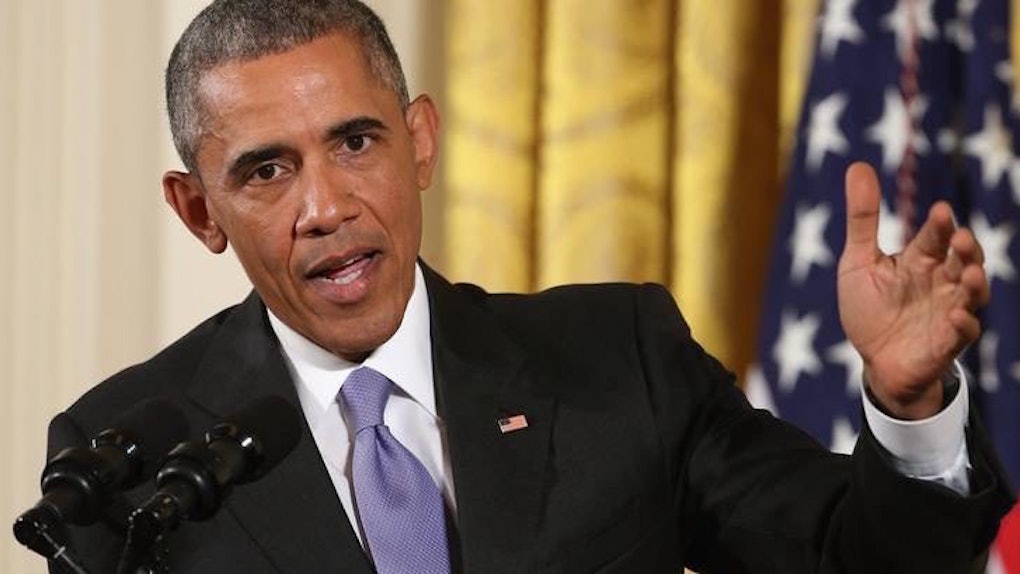 What To Know About Obama's Case For Democracy In Troubled Nations

President Obama made a moving case for democracy in his recent address to the United Nations. He cited the “lessons of history” to defend his vision of an international order based on diplomacy, rather than use of force.

While acknowledging that democracy is somewhat shaped by a people’s culture and national history, he urged that “some universal truths are self-evident.”

President Obama hearkened back to the founding vision of the United Nations as a guardian of freedoms and a keeper of international peace.

If one looks into its history, the United Nations was, indeed, founded primarily by Western democracies whose political ethos and diplomatic hopes reflected Obama’s very message today.

The unfortunate reality is that non-democratic, militant, authoritarian regimes who eschew these same principles have resurged.

With its body increasingly overridden by anti-democratic ills, the UN may prove less steadfast in its ability to defend its democratic constitution and broadcast its ideals.

Radical regimes in the Middle East attest to this dangerous trend. When asked about Iran’s Supreme Leader’s nihilistic tendencies towards Israel, Obama conceded:

I think his ideology is steeped with anti-Semitism, and if he could, without catastrophic costs, inflict great harm on Israel, I’m confident that he would. But […] it is possible for leaders or regimes to be cruel, bigoted, twisted in their worldviews and still make rational calculations with respect to their limits and their self-preservation.

But power politics and diplomacy in the Middle East haven’t been governed by rational thinking for a long time.

The region is so violently beholden to ethnic and religious strife, so ideologically zealous as to burden — or supersede — reasonable thinking with intense and legitimate emotional trauma.

President Obama’s assurances about rational calculations, in spite of “twisted” worldviews, fundamentally misunderstands an Iranian regime saturated with anti-Semitism and endowed with great power. And when such nations occupy a growing bloc at the UN, its democratic legitimacy is necessarily compromised.

Rational diplomacy presupposes universal objectives of morality, ethics and justice that simply do not exist across the globe, no matter how fiercely Obama lobbies for them at the UN. An international order founded on democratic principles and their “universal truths” has proven untenable in the Middle East, where conflicts are laden with religious claims and where recent experience favors extremism.

President Obama’s message implies ingrained cultural and emotional instincts can be marginalized in the political process, or perhaps, reconciled with the underpinnings of democracy. Maybe identity and ideology aren’t so politically rousing in the liberal democracy over which President Obama presides. But in the Islamic Republic of Iran, ideology — one quite antithetical to democracy — is a constitutional imperative.

President Obama may reason further that ideology is intrinsically personal, and the Supreme Leader might isolate his anti-Semitism from Iranian diplomacy. But the Ayatollah has made his personal ideology the stated ideology of Iran.

His nihilistic attitudes toward Israel are advanced not in the privacy of his own home, but on the podium addressing his countrymen. These official statements reveal deep hostilities toward Israel that challenge this democratic model of freedom and undermine the work of diplomacy.

It is, thus, naïve to think a country born out of an anti-Western revolution and religious fervor in 1979 can be squared with the democratic ideals embodied by the United Nations Obama envisions — or, more accurately, remembers.

In Russia, too, Putin forges ahead with expansionist designs, ignoring others’ sovereignties in pursuit of his own national, even personal, interests. His politics likewise fall outside the realm of democratic governance and disrupt the path of diplomacy Obama has navigated.

The United Nations has the potential to champion democracy around the world and to normalize international relations. But in order for it to affect genuine democratic progress — or, in the president’s own words, “human progress” — the United Nations and its member states must first vote unanimously for democracy.

It must empower democratic ideologies and reject authoritarianism. Such a consensus might prove more elusive than we think.