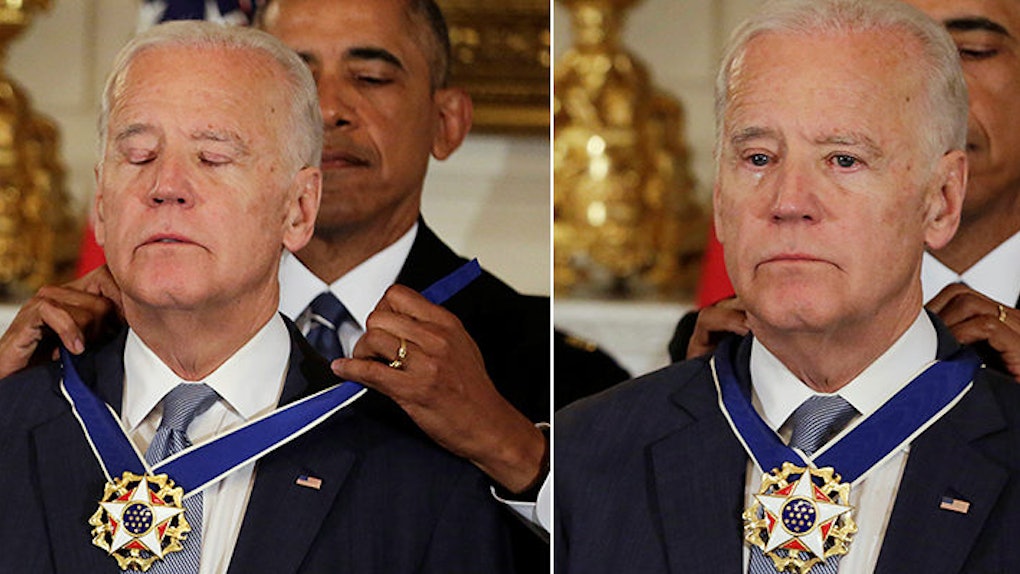 Joe Biden could barely contain himself.

While the vice president thought he'd merely commemorate the past eight years on Thursday by having a toast, President Obama presented him with something greater: the surprise of the nation's highest civilian honor, the Medal of Freedom.

Before revealing Biden would receive the award, President Obama had been at the podium during a White House ceremony designated to honor Joe Biden.

The president's many words of praise for his deputy had been enough to move Biden to tears. But when Obama brought forth a serviceman carrying the medal, the vice president lost it.

He turned his back in apparent disbelief.

For your faith in your fellow Americans, for your love of country and for your lifetime of service that will endure through the generations, I'd like to ask the military aide to join us on stage. For my final time as president, I am pleased to award our nation's highest civilian honor, the Presidential Medal of Freedom.

After receiving the award, an emotional and tearful Biden took to the podium. This time, it was his turn to make his counterpart visibly emotional.

Biden touched upon many subjects: his days in the Senate with Obama, their working relationship and how impressed he was with the commander-in-chief's judgement.

The vice president also explained how their families had bonded. He said the president was in the Biden family's "heart."

Obama awarded the medal with additional distinction, an honor which has only been bestowed upon three other figures: Pope John Paul II, Ronald Reagan and Colin Powell.