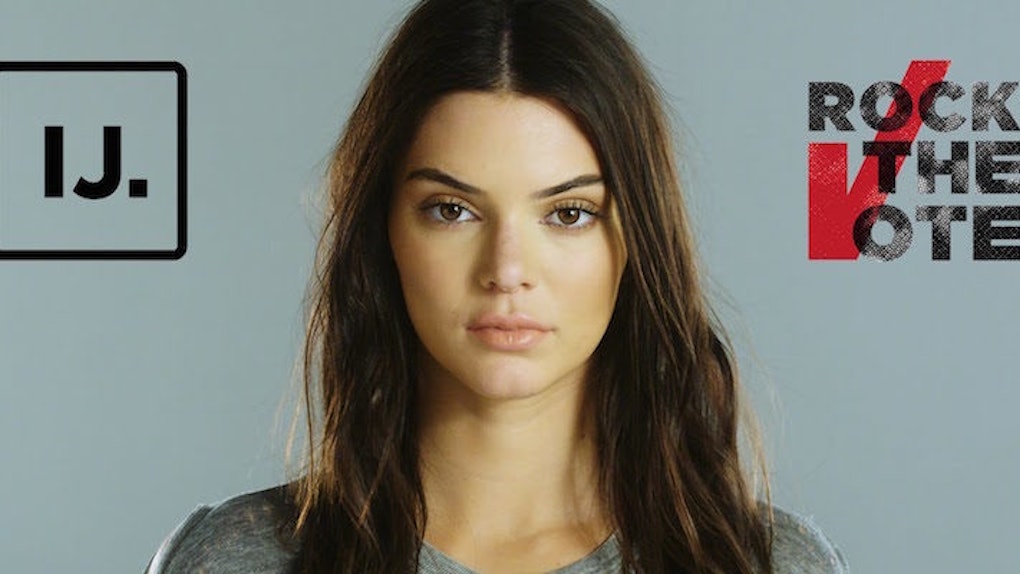 41 Reasons Why National Voter Registration Day Was A Huge Success

Did you know that last Tuesday, September 22 was National Voter Registration Day?

There’s no shame if you somehow missed it. It was the first day of the Pope’s trip to the United States, and we were all busy watching him cruise around in a white Jeep Wrangler and kiss babies who were dressed in Pope costumes.

But, just so you do know, National Voter Registration Day (NVRD) was actually a pretty huge deal. Not just because AJ McLean, the ~best~ member of the Backstreet Boys, tweeted about it.

NVRD was a huge deal because for a few hours, celebrities, politicians, activists and communities came together for a common cause. The message was simple: Register to vote so everyone has a voice on election day.

The fact that literally thousands of people -- from all over the political spectrum -- came together to encourage voter registration is pretty unreal.

For anyone who may have missed the moment live, I’ve compiled a list of the 45 best posts, complete with my personal stream of consciousness.

1) The White House and the president both formally called attention to NVRD and the importance of voter registration. Pretty predictable, right?

Actually, not so much.

National Voter Registration Day didn’t even exist until after the 2012 election, when 6 million Americans didn’t vote because they missed a registration deadline or didn’t know how to register.

A 20-something man came up with the idea after he saw those staggering numbers, and three years later, a coalition of organizations are leading the charge, and the president of the United States is tweeting about it. Pretty sweet.

2) The Republican Party joined in.

As we always say, registering to vote has nothing to do with political affiliation. But having the White House and the GOP both supporting this day is huge because, as I understand it, the Obama administration and the leaders of the GOP tend not to sit together at lunch, so to speak.

But, YES! I’ve been craving some glimmer of hope that there are common causes among everyone. And wait for it…

3) Republican AND Democratic presidential candidates post about NVRD and registering to vote...without attacking each other! What!

This is fantastic! Our political system is actually having a special moment of collaboration!

FYI: This is essentially the equivalent of a Super Blood Moon Eclipse for political nerds like me. Don’t worry; here come the celebs...

Janelle Monae joined forces with the NVRD coalition and the White House to echo messages of voter participation and registration.

In the video, 19-year-old Kendall gives a brief history of Suffragettes and explains that because of their efforts, women like her are able to cast a vote on Election Day.

It went pretty well, and even the film, "Suffragette," got on board!

Listen, if Kendall Jenner and Meryl Streep (I can only assume she personally runs the "Suffragette" movie Instagram) can come together in unity over the right to vote, shouldn’t we pause Cartoon Network for like five minutes and register to vote?

5) HelloGiggles is helping us to publish a YouTube video where comedians work to convince us to vote.

Okay, so Kendall Jenner has thrown her (vintage) hat into the NVRD ring, and now this. If ever there’s a time to use “ROFL,” it’s here.

Our Fave Comedians Explain Why You Should Vote! Happy National Voter Registration Day! We got together with Rock the Vote and asked our fave comedians to explain why YOU should vote! Here's what they had to say... Posted by HelloGiggles on Tuesday, September 22, 2015

Peep that Paul Scheer spot. Even he says it’s genius.

We’ve got serious heavyweights from Hollywood:

Today is National Register to Vote Day! Are you registered? Are you ready? #DemocracyIsSexy http://t.co/pD38EjdU6I @RockTheVote — kerry washington (@kerrywashington) September 22, 2015

Hello everyone! Diane Guerrero is here and ready to answer your questions about Hispanic Heritage Month of Action and the Latino vote. Be sure to post your question in the comment section below. Posted by Voto Latino on Tuesday, September 22, 2015

8) America is turning up for America... Meta.

12) Tike Sumpter is flawless, and she will always be Raina Thorpe to me.

14) Jessica Alba shows us all how to be good citizens.

15) Jackee Harry: This woman practically raised me when she was on “Sister Sister.” There's no better TV mom in the world.

16) Okay, so I have never seen Star Trek (I know, I know), but I def know George Takei due to his general badassery.

17) Monique Coleman: I was way too old to have watched "High School Musical" the amount of times I did. We really are all in this together. *tear*

18) At this point, the musicians are joining in to support getting everyone registered to vote.

"YEAH! YEAH!" Usher is coming through for democracy.

19) Whoa, even the Grateful Dead are getting involved.

20) In, perhaps, the greatest remix of the year, ILoveMakonnen re-recorded “On a Tuesday” for the occasion.

Which got the attention of some of the biggest names in radio, like iHeartRadio...

Happy National Voter Registration Day! It doesn't matter what side you're on. In America, VOTING is the party, and you'... Posted by iHeartRadio on Tuesday, September 22, 2015

Even Ryan Seacrest commented on the matter!

21) Idea: Jack Johnson is exclusively now the voice on every book-on-tape. Also, who wouldn’t register for this guy?

23) I dare you to show me a human who's cooler than Trombone Shorty.

24) Ah, Becky G! I love her. I feel like I just want to take her to the mall and split an Auntie Anne’s pretzel.

25) Dave Matthews is obviously a legendary voice in the campaign.

26) Michael Franti puts in his two cents on the importance of voting.

27) Fun Fact: I was obsessed with Motion City Soundtrack when I was in high school, and now my 16-year-old sister is too.

29) No way! Even Russell Simmons supports the cause.

30) Dan Bern even wrote a song for the cause.

31) I honestly would love nothing more than to go to the beach with the guys from New Beat Fund. Right after I register to vote at my current address.

34) Awww, I love seeing Consequence registering to vote for his son.

35) Wyclef isn’t "Gone Til November," he’s trying to get you registered before then!

37) You guys, I told you AJ was in on this! If you weren’t into AJ McLean at some point, even just platonically, you can go home. (Wait, register to vote first.)

38) Big ups to The Marcus King Band for raising awareness about elections happening THIS year.

Your local elected officials might actually affect your daily life more than the president.

39) Michelle Williams from Destiny’s Child jumped in. BRB, I'm going to listen to “Independent Woman” while I register to vote.

40) In addition to Hollywood megastars and musical legends, a ton of other cultural influencers celebrated NVRD!

Nev Schulman who brought us the masterpiece that is “Catfish”

Is that Craig from Craigslist?! Thanks to him, I actually own furniture.

41) Finally, John Lewis delivered the most moving post of the day.

While it’s always crazy fun to see how celebrities are spending their time, it’s so much more important to remember the people who fought and died for our right to vote.

So start with yourself. Update your voter registration with your current address, and then spend a few extra minutes reminding your friends and family to do the same.

I’m excited by what I saw on NVRD. It proves we can come together for the sake of ourselves and our country. Register here.