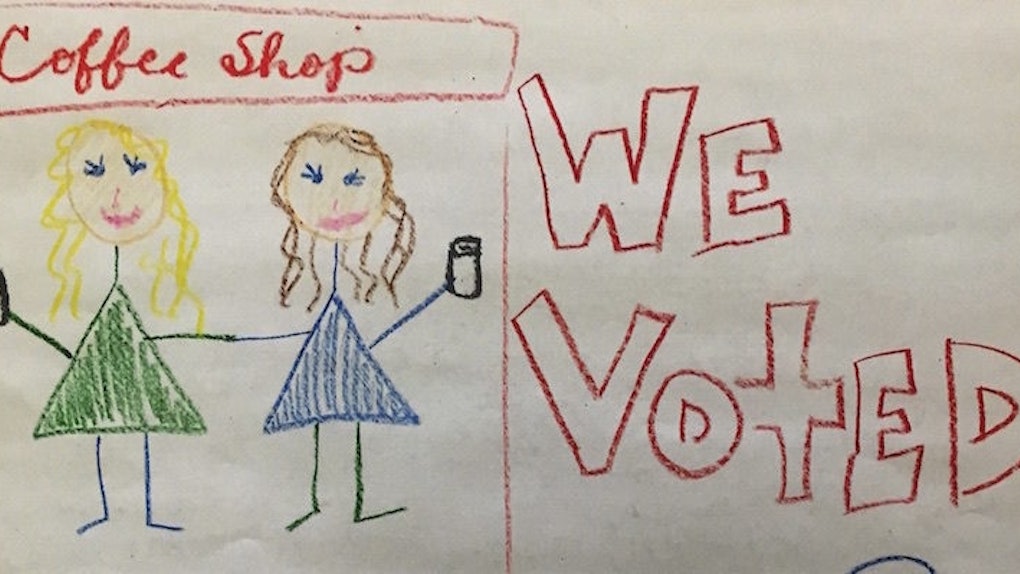 The Millennial generation is at a point where we rival Baby Boomers to be the largest number of voters in the United States.

We can be a big force. But a lot of us choose not to vote, which isn't cool.

Rather than shame people for not voting, I wanted to celebrate times Millennials did vote.

So, I got a couple packs of crayons and asked people around the office to draw a time they voted. Because, you know, adults drawing with crayons is hilarious.

These drawings show what Millennials remember about voting — whether it was for a political election or the Oscars — and show that voting is a memorable experience.

Many of these experiences are simply walking into a polling place or sending in an absentee ballot. But the giddiness with which the Millennials drew show that even with a mundane experience, voting is exciting.

"I was really excited to get to the polls for the first time."

"I voted for the guy who handed out pizza."

My first time voting was for my college dorm's president freshmen year. I made my decision extremely carefully and thoughtfully. I voted for the guy who handed out pizza.

"We would be voting for our first female president."

After we voted in the primary together, we got sent official voter registration documents about where to go on Nov. 8. We immediately put them on the fridge and took a moment to take in the reality of the situation: We would be voting for our first female president.

We're always leaving at different times in the morning or coming home and not seeing each other, so it's nice to plan a morning trip before work to get coffee and, you know, casually vote for A WOMAN in the White House. It definitely means a lot to us.

"I was stuck in line for an hour behind a guy who kept farting."

The first time I voted I was stuck in line for an hour behind a guy who kept farting. I'm a patriot.

"I stole a stamp from my roommate."

I'm still a resident of Virginia, a swing state, so I had to send my absentee ballot in the mail — right after I stole a stamp from my roommate (who was also my witness).

"All voting cards are directly handed to the Queen."

In the UK, it is imperative to turn up to the polling station with fish and chips to appease Prince Harry. All voting cards are directly handed to the Queen.

"I voted in Jersey in 2012 right after Hurricane Sandy."

I voted in Jersey in 2012 right after Hurricane Sandy. It took my mom and me a while to get to our polling place because of fallen trees. And when we got there, we found out it didn't have power from the storm. We slowly made our way across town to the new polling place to get our votes in.

"I've worked on many Oscar campaigns in my time."

I've worked on many Oscar campaigns in my time and our PR team voted as a unit on the films and actors we had championed throughout the season.

As a long, longgg, longtime Leonardo Dicaprio fan, nothing felt better than not only working on both his campaigns ("Wolf of Wall Street," "The Revenant") but hearing his name FINALLY called as Best Actor and knowing I had something to do with it!

"I was a grad student in Scotland."

In 2012, I was a grad student in Scotland and sent in my vote with an absentee ballot via mail. It was incredible to vote from abroad and see how much people in other countries care about America's election.

"I get a little emotional knowing that my vote has helped enact serious change in this country."

As you can see from this artistic masterpiece, my first time voting in a presidential election was in a college dorm room (absentee ballot FTW) during the 2012 election. I went all in on my boy Barry.

But in all seriousness, when I look back on some of the pivotal moments during the Obama Administration — like the end of "Don't Ask, Don't Tell," the creation of a health care plan that was actually affordable, the unemployment rate being cut in half, the legalization of same-sex marriage (the list goes ON) — I get a little emotional knowing that my vote has helped enact serious change in this country.