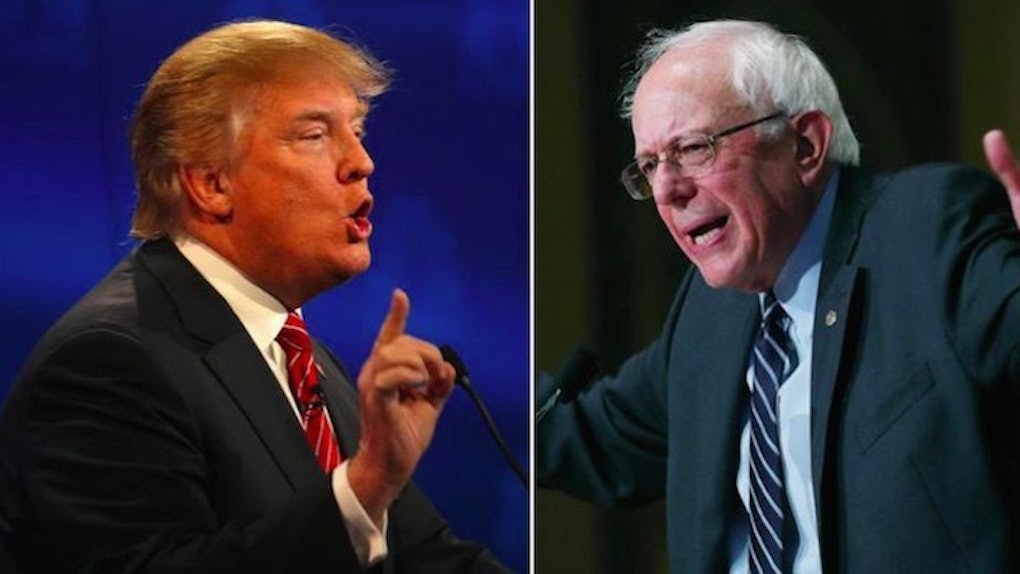 A Millennial's Guide To The 4 Current Presidential Frontrunners

Whether it's Donald Trump’s controversial remarks about immigration or the press questioning the authenticity of Hillary Clinton’s hair, I’m sure you know that the presidential election of 2016 is quickly approaching.

The Republican and Democratic presidential primary races are currently taking place to see who gets the nomination from his/her own political party to advance to the presidential ballot.

As of now, Donald Trump and Ben Carson are leading polls on the Republican side, with Trump in front.

Hillary Clinton is leading the Democratic party race with Bernie Sanders trailing behind her.

The descriptions below provide an outline and main points of what each nominee plans to do if elected president.

Both Democrat and Republican nominees discuss his or her views of important issues regarding immigration, taxes, guns and women’s rights.p

That being said, here is a Millennial’s guide to the current presidential frontrunners:

Hillary Clinton recently finished serving as the Secretary of State for President Barack Obama in 2013.

She holds a law degree from Yale Law School and served as the First Lady of the US from 1993 to 2001.

If elected president, Clinton wants to reform immigration in the US by providing illegal immigrants a pathway to citizenship. Clinton believes that her immigration reform will strengthen families, the economy and the American Dream.

If Clinton wins the presidential election, she will fight to allow anyone, regardless of immigration status, the right to healthcare coverage under the Affordable Care Act.

Clinton wants to reduce middle-class taxes and increase taxes on the wealthy to help cover rising expenses. If she wins the presidency, she promises not to raise taxes on households earning less than $250,000.

According to the Wall Street Journal, Clinton has formulated a plan that appeals to the middle class and would provide a tax credit to assist people with out-of-pocket healthcare costs.

As for gun laws, Clinton plans to reform them after the numerous mass shootings that have occurred all over the US.

In order to lower the number of shootings, Clinton proposed stricter laws to make sure that everyone who applies for a gun license undergoes a full and thorough background check.

She would also enact stricter regulations on gun sales to the mentally ill.

As for abortion, Clinton believes in protecting abortion rights for women.

Bernie Sanders is currently serving as the Senator of Vermont.

The son of an immigrant, Bernie Sanders has made that connection known when discussing immigration reform and what he would do as president.

As president, Sanders would provide permanent immigration relief to undocumented relatives of US citizens and citizens' relatives whose visas have expired.

Sanders also plans to reunite families who have been wrongfully deported out of the US. He wants to focus on making the immigration reform as humane as possible.

As for taxes, Sanders believes that the gap between the poor/working class and the wealthy is the highest it's been since the 1920s. He wants to tax Wall Street speculators who landed the US in a recession in 2008.

As president, Sanders vows to reduce income and wealth inequality by taxing the rich and large corporations.

Sanders wants to reverse trade policies that, he says, outsource American jobs to low paying countries such as China.

He has, however, been attacked by fellow Democrats for voting against a legislation in the past that would have required background checks for the purchases of guns, according to Time.

The reason he most likely did this was because he is the senator of a major hunting state.

Donald Trump is a television personality and a real estate tycoon, with a net worth estimated to be about $4.5 billion, according to Forbes.

Trump is a heavy believer of enforcing strict immigration laws.

During Republican presidential debates, he always mentions the importance of his proposed laws.

As president, he plans to eliminate illegal immigration by building a wall stretching across the border of the US and Mexico. His plan is to have Mexico pay for said wall.

He accuses the Mexican government of taking advantage of the US government by encouraging people to cross the border.

He wants to triple the numbers of officers on border patrol and immediately deport illegal immigrants back to their country.

Trump wants to reduce taxes across the wealthy, middle class and working poor.

Income taxes are to be reduced so that Americans can keep their hard-earned money, whether they come from a working class family or happen to be a corporation.

Trump wants to protect the Second Amendment of the US Constitution that gives Americans the right to keep and bear arms.

He believes Americans should have the right to carry a gun to protect and defend themselves against harm, and claims that mass shootings happen when an unlicensed gun user steals from a licensed gun owner.

Trump wants to bring manufacturing jobs to the US instead of overseas by strengthening the USA's position in negotiations with China.

He accuses China of manipulating its currency and wants the US to discuss these issues head-on instead of hiding from them.

Trump is pro-life and believes abortion is wrong.

He wants to change the Affordable Health Care Act, calling it a "disaster" in an interview with "60 Minutes."

Ben Carson is a retired neurosurgeon from John Hopkins Hospital.

For tax reform, Carson initially proposed everyone should pay the same rate in taxes -- a flat tax.

After criticism from economists stating that the plan would bring tremendous debt to the US, Carson backtracked and agreed with Trump’s tax plan, calling it fair.

As president, Carson said he will protect the Second Amendment.

He wants to avoid government control at all costs.

He has stated, however, that he believes people living in big metropolitan cities shouldn’t own semi-automatic weapons because there is a bigger chance of letting the weapon fall into the wrong hands.

He claims Americans living in the countryside should be allowed to own semi-automatic weapons, due to a lower number in population.

Carson believes that abortion is wrong.

As president, he will set up and provide expectant mothers with pro-life services.

The most important part of any election is staying informed.

Hopefully, you get a better idea about what is happening in the present political scene and what each nominee believes in.

Anything can change at this point depending on how well each nominee performs at the upcoming debates.