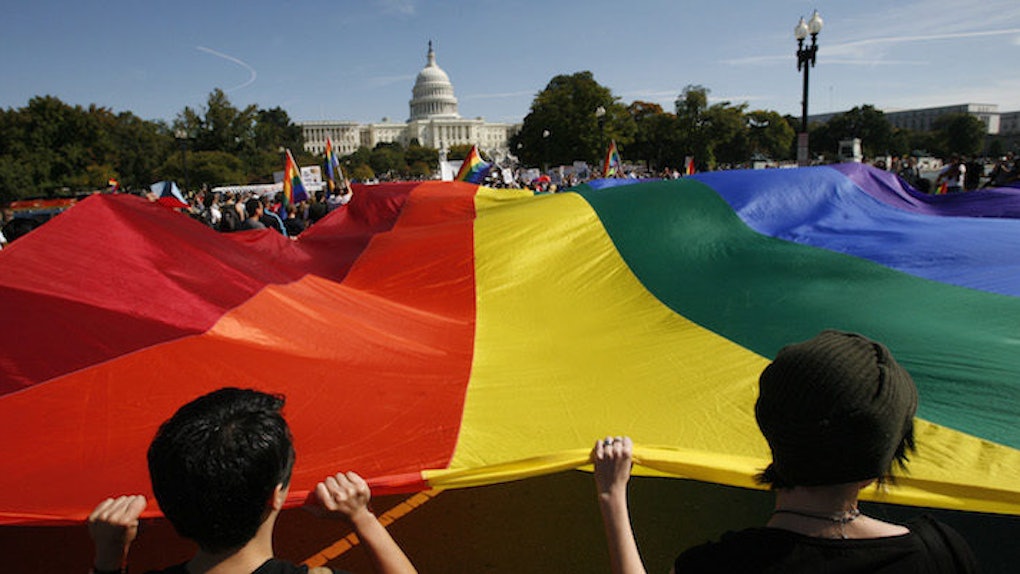 Mike Pence's new neighbors in the DC area are making it abundantly clear how they feel about his stance on LGBTQ+ rights by adorning their homes with gay pride flags, Politico reports.

Pence is temporarily renting a house in Chevy Chase, MD — on the outskirts of Northwest DC — until he is sworn in as vice president.

Subsequently, he'll move to the official vice presidential residence on the grounds of the US Naval Observatory.

But for the time being, he's going to have to live on a block where people believe love is love, and aren't afraid to show it.

Many are justifiably worried about what impact Pence will have on LGBTQ+ rights as vice president.

While Donald Trump has said he accepts the Supreme Court's decision on same-sex marriage, many in the LGBTQ+ community and beyond are still concerned about Pence, given the positions he's taken against it throughout his political career.

Early in his career, Pence advocated taking government money for HIV treatment and reallocating it toward gay "conversion therapy."

A decade ago, in 2006, Pence said same-sex marriage would cause "societal collapse," and supported a constitutional amendment that would define marriage as a union between a man and a woman.

Pence also opposed a law that would prohibit discrimination against LGBTQ+ people in the workplace, as well as the repeal of "don't ask, don't tell."

Last year, the vice-president elect generated nationwide controversy when he signed the "Religious Freedom Restoration Act" as the governor of Indiana, which allowed business owners to discriminate against LGBTQ+ people on religious grounds.

Pence was widely condemned for this, and he ultimately signed legislation to amend the bill to prevent discrimination.

Our future vice president also opposed the Obama administration's directive to allow students to use the bathroom of the gender they identify with.

Given all this, it's understandable why Pence's new neighbors felt the need to offer him a powerful gesture of symbolic defiance.