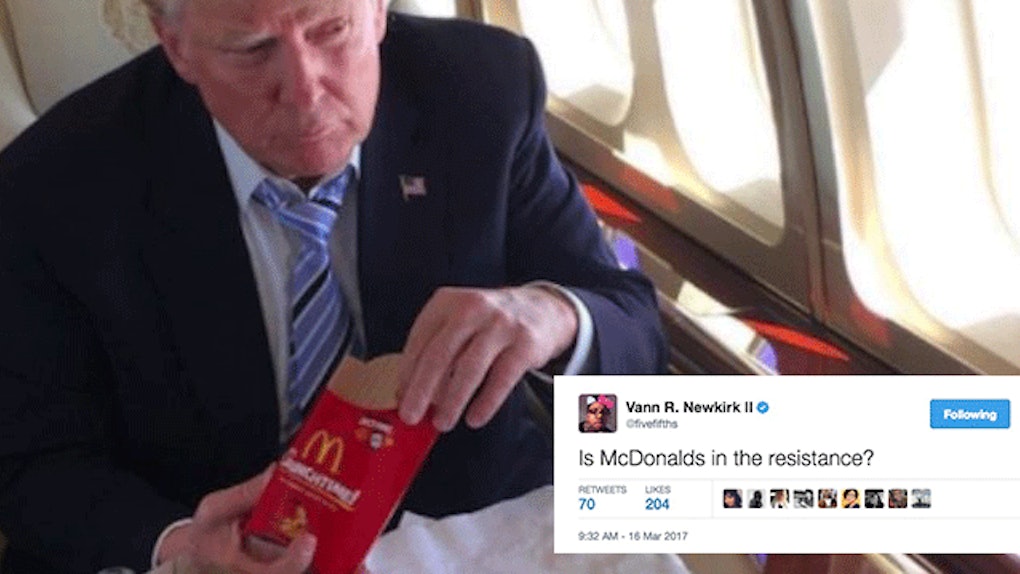 @realDonaldTrump You are actually a disgusting excuse of a President and we would love to have @BarackObama back, also you have tiny hands.

It was quickly deleted, and McDonald's claims its account was compromised, but the damage was already done.

"Compromised." Sure, McDonald's — we totally believe you.

(It's OK, we know how you really feel now and we're totally on your side, don't worry.)

Also, it seems a bit too late for this. The fries are out of the bag. We know the truth.

Everyone is now convinced Ronald McDonald voted for Hillary Clinton, is fed up with Donald Trump's bullshit and wants to lead the resistance.

America is lovin' it.

Yeah, I'd like a large number one with a side of RESISTANCE.

It's not clear who wrote the tweet, but people have theories.

If Trump talks smack about McDonald's after this, we have evidence he's a huge fan and is spreading alternative facts.

This is not FAKE NEWS. Perhaps the Big Mac will temporarily become the Bigly Mac?

Some Trump supporters are already saying they will boycott McDonald's.

That's actually probably a good idea, since Republicans are trying really hard to take away their health care. Just saying.