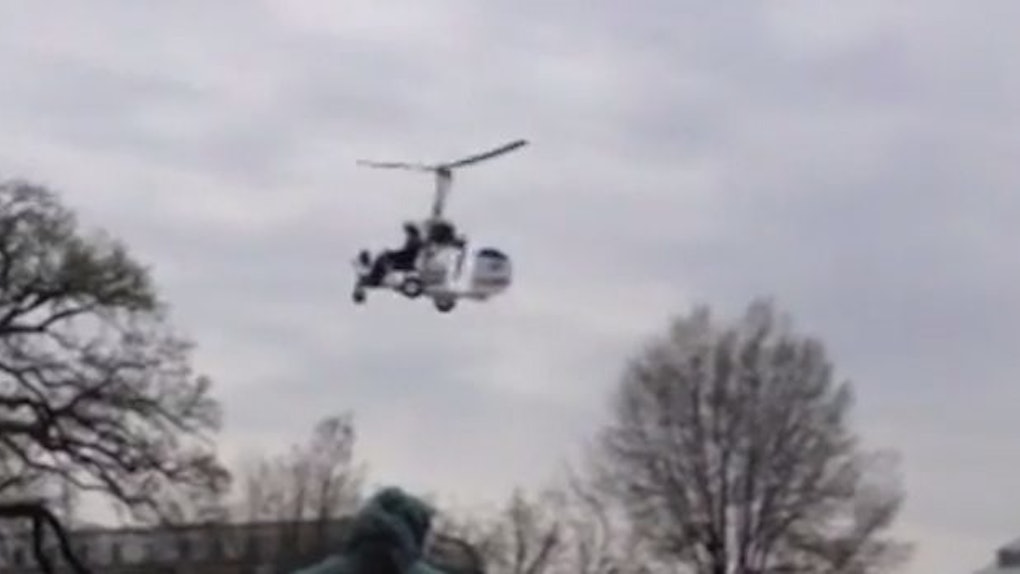 On Wednesday, Doug Hughes, a 61-year-old mailman from Ruskin, FL, intentionally landed a gyrocopter on the Capitol lawn.

He did so in protest of money in politics and to garner support for campaign finance reform, Politico reports. According to reports, Hughes carried letters addressed to all 535 members of Congress, which outlined his intentions and issues with corruption in American politics. He'd apparently been planning this for quite some time.

The gyrocopter landed on the west lawn of the Capitol, leading authorities to shut down the surrounding area.

In an interview with the Tampa Bay Times, Hughes made it clear that he feels the government is controlled by the rich, and he wanted to do something about it:

On his website, Hughes claims he warned the government he was planning this stunt before he pulled it off, sending an email to info@barackobama.com.

In all of his statements, he made it clear he didn't intend to do anything violent, but he felt this dramatic act was necessary to draw attention to an imminent issue. None of this changes the fact that what he did is illegal.

Mike Shanahan, a close friend of Hughes, also told the Tampa Bay Times that he called the Secret Service a few hours before takeoff to alert them of his friend's intentions.

He's not a suicide bomber, he's a patriot ...I was scared to death they were going to kill him. My thanks goes out to whomever it was who decided not to pull the trigger.

Hughes was immediately taken into custody upon landing, but not before a bystander captured video of the incident:

While Hughes' tactics may have been unorthodox, he has a point about the need for campaign finance reform.

Whether or not his actions will lead to a broader discussion remains to be seen.

It is notable, however, that just a day before his now infamous flight, presidential candidate Hillary Clinton stated she'd support a constitutional amendment surrounding campaign finance.

Speaking at Kirkwood Community College in Iowa, she said,

Obviously, much like Hughes, Clinton is of the opinion money has too much influence in American politics.