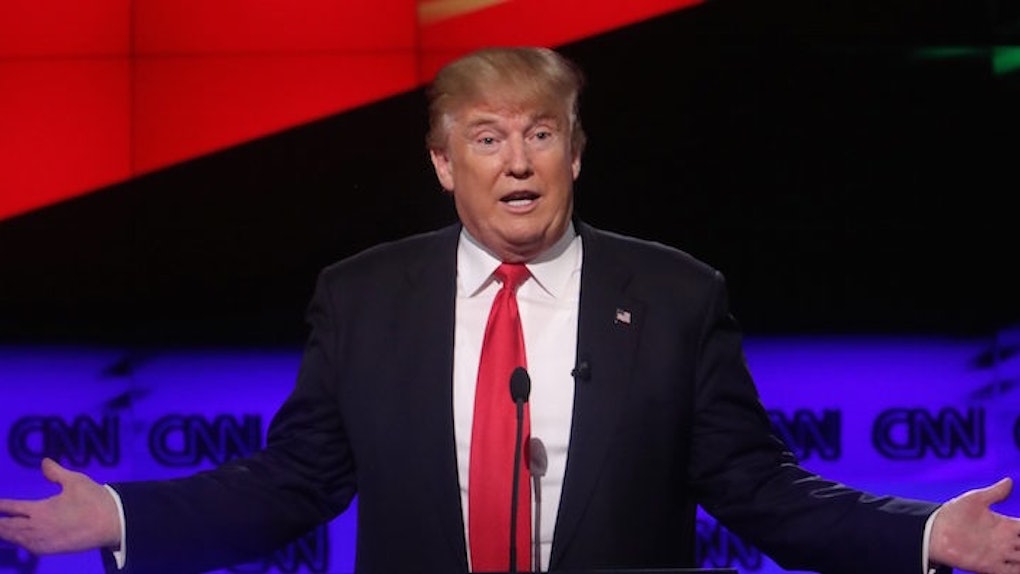 A Florida man named Hector Santos just got the most disgusting Trump tattoo you'll ever see. It's a nude portrait of the real estate mogul, complete with a micropenis. Congratulations, America, this is where we are as a country right now.

Here's a photo of the tattoo, which is definitely NSFW.

We should never judge a presidential candidate, or any person for that matter, on the basis of his or her physical appearance or stature. But, in Santos' defense, he got the tattoo for arguably positive reasons: a critique of Trump's presidential campaign and the intolerant rhetoric surrounding it. He explained,

One of the main reasons why I got the tattoo is it reminds me to be a better person everyday. To never be as closed-minded and arrogant as Donald Trump. I also see him as a satire on politics because it's like he's running a joke that has gone too far. He doesn't represent any qualities as president or have any knowledge of policy. Basically he's running a circus and it's kind of getting out of control. And besides it's also a great piece of art, don't you think?

So in some ways, you might call this a tattoo for tolerance.

Santos got the tattoo for free at Pride N Envy Tattoos in Kissimmee, Florida.

The tattoo is derived from a piece of art called "Make America Great Again" created by the artist Illma Gore. In a statement about the painting posted on her website, Gore said,

'Make America Great Again' was created to evoke a reaction from its audience, good or bad, about the significance we place on our physical selves. One should not feel emasculated by their penis size or vagina, as it does not define who you are. Your genitals do not define your gender, your power, or your status. Simply put, you can be a massive prick, despite what is in your pants.

After Gore posted a photo of the piece on Facebook a couple of months ago, it went viral.

Spooks Joya, the owner of Pride N Envy Tattoos, saw the photo and loved the satirical message behind it. He decided to offer a free tattoo of the painting to anyone who wanted it. In an email sent to Motherboard, Joya said,

I actually saw the original picture by Illma Gore and thought it was awesome. I researched what the piece stood for and couldn't resist not doing it, so I offered to do it for free on anyone who wanted. It started out as a joke but I was surprised people seriously wanted to get it done. Men and women. It was nuts!!

Santos spotted Joya's offer and did not hesitate; he wanted the Trump tattoo. In a text message sent to Motherboard, Santos said,

I took an interest because I don't know how it's possible that the system would let someone be President that is not into politics, and would have no idea how to run a country.

Santos also said he's received a lot of compliments since he got the tattoo. He stated,

People's reaction when they see the tattoo has been the opposite of what I thought I was going to get. People get impressed in the detail of the tattoo. It basically looks just like the painting. And I get a laugh because it's really funny. I've seen some comments on Instagram and they're like 'wtf who would get [something] like this done?' blah blah but idgaf really. I love my tattoo and I can care less [of] what people think of me or my piece.

Haters gonna hate, but it seems Santos is just trying to spread the love. Gore reportedly saw a pic of Santos' new tattoo on Instagram and said, "I want to be his best friend." In a weird way, Trump actually brought people together for once.