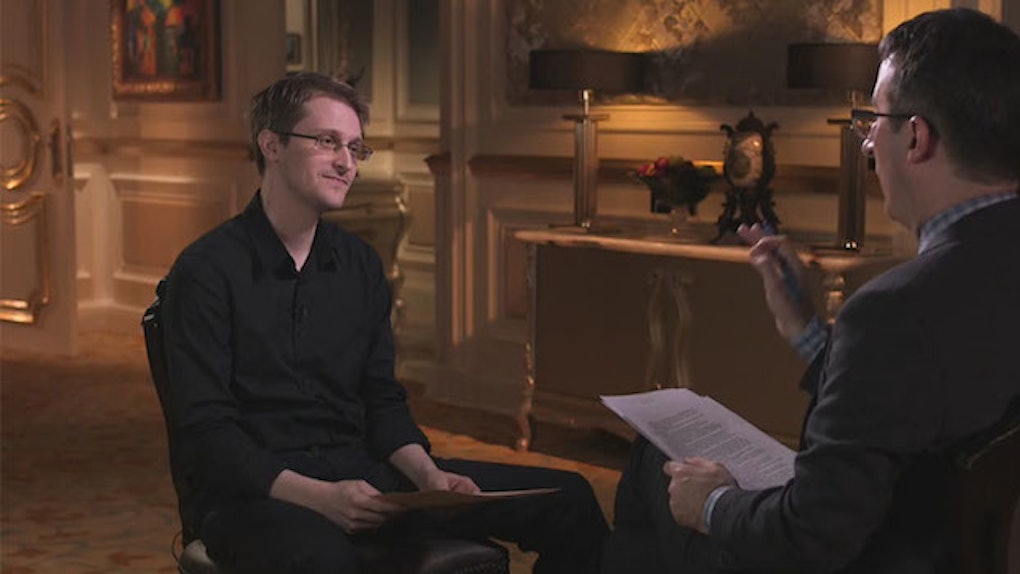 Oliver didn't just speak with Snowden for laughs, however, he did it to make several extremely important points.

Primarily, he highlighted the way in which Americans exhibit a disturbing lack of concern over the NSA's mass surveillance programs.

Simply put, most Americans don't give a rat's ass the government is spying on them. And not only do they not give a sh*t, but they also don't seem to understand the nature of the government's surveillance activities.

What's more, it appears many Americans don't even know who Edward Snowden really is.

As Oliver notes, it would be fair for Americans to express a lack of concern over the government's surveillance activities if they did so from an informed standpoint.

But after Oliver interviewed a number of people in Times Square, it became apparent that Americans don't understand what the government is doing or why it's doing it.

He was able to reach this conclusion by questioning them about dick pics.

Well, the good news is there's no program named 'The Dick Pic Program.' The bad news is they are still collecting everybody's information... Including your dick pics.

Indeed, in this digitized world, none of your information is safe. This issue matters now more than ever, particularly in relation to the Patriot Act, a subject Oliver covers in the segment.

You may feel you have nothing to hide from the government, and there's probably a great deal of truth to this. But that doesn't excuse violations of privacy, nor does it mean information collected on you now can't be used in harmful ways in the future.

Information is power, and it must be protected.

In the post-9/11 world, the government certainly has to go to certain lengths to protect us, but at what cost? That's the question Snowden wished to raise when he leaked information about its surveillance programs.

And it's a question we have a duty to debate as citizens.

You should care that the government can see your dick pics. You could also reconsider ever sending them, but that's another issue altogether.

More importantly, you have a right to privacy, and the government should not be able to monitor the public with limitless authority and impunity.

For a bigger and clearer picture of what all of this means, watch the full interview between Oliver and Snowden: