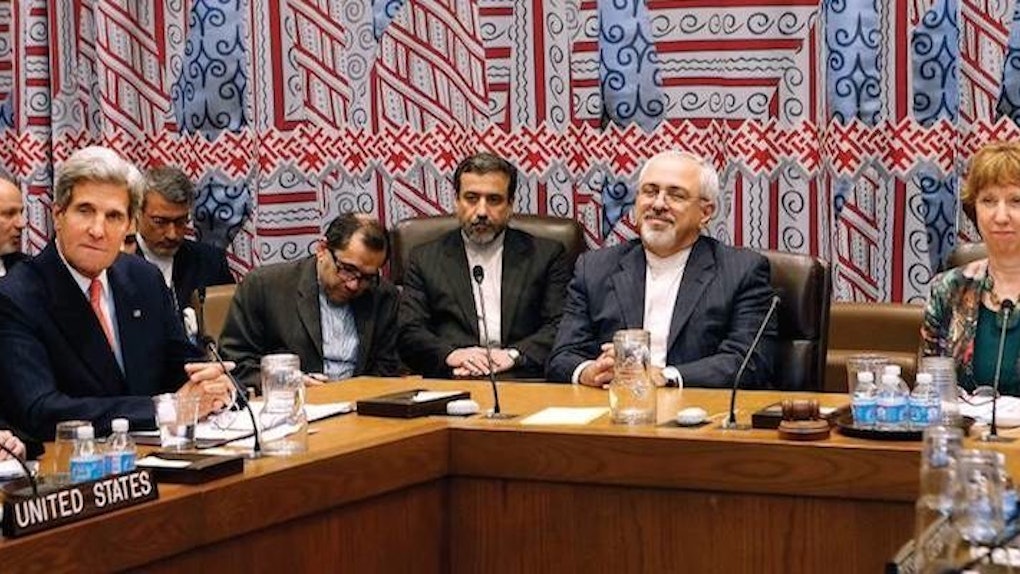 The dropping of nuclear weapons on Hiroshima and Nagasaki forever transformed the globe's political, social and economic landscape.

The atomic bomb is not a relic of the Cold War.

There's an intellectual and scientific breach that cannot be undone, and Millennials are yet another generation to inherit the everlasting loom of the Cold War, which continues to expand in North Korea, and possibly Iran.

The continual growth of nuclear proliferation will be a defining factor of this and the next generation, especially as nuclear muscles swell and mini-Cold Wars manifest and define relations between historically and ideologically diverse states.

Looking at the current Sunni-Shiite conflicts and sectarian violence in the Middle East, which New Yorker contributor Steve Coll calls a “Thirty Years' War of grotesquery — mass abductions, sexual slavery, and tweeted beheadings,” it is fairly clear that mixing nuclear weapons into this growing hodgepodge will be madness run amok.

Last Thursday, April 2, Iran and the P5+1 (the permanent members of the United Nations Security Council and Germany) released the framework of a Joint Comprehensive Plan of Action (JCPOA) regarding Iran's nuclear infrastructure and nuclear program.

According to a statement released by the White House, the framework for the deal includes:

1. Iran to reduce approximately two-thirds of its installed centrifuges, from around 19,000 to 6,104 first-generation-only centrifuges.

3. Iran will convert its controversial Fordow facility to a peaceful establishment for 15 years.

4. Iran will redesign and rebuild a heavy water research reactor in Arak so that it cannot produce plutonium required for nuclear weapons.

5. Iran will uphold rigorous inspection and transparency requirements for 15 years, which includes inspections on yellowcake and uranium mining.

6. After the period of these limitations, Iran will remain a party to the Nuclear Non-Proliferation Treaty (NPT).

This deal, which has a finalization deadline set for June 30th, also reduces Iran's “breakout” time — the approximate time it would take to acquire enough fissile material to blitzkrieg a nuclear bomb — from two or three months to at least a year.

Varying reactions from world leaders on the Iran Deal

In return for truly historic measures in slowing down Iran's nuclear capability, the US and EU promise to suspend nuclear-related sanctions once the International Atomic Energy Agency (IAEA) has determined that Iran fulfilled its half of the agreement.

Speaking from the Rose Garden last Thursday, Obama assured critics and worriers that the deal is the best possible option to freeze Iran's nuclear potential, saying,

Today, after many months of tough principle diplomacy, we have achieved the framework for that deal…It is a good deal, a deal that meets our core objectives.

The next day, Friday, Iranian President Hassan Rouhani stated that the framework marks the “first step towards constructive interaction with the world."

Rouhani added, “Some think we should either fight with the world or surrender to other powers. We believe there is a third option. We can cooperate with the world.”

Despite Iran's 2009 refusal to send uranium stockpiles out of the country (a similar proposal is outlined in the current framework) and the IAEA's 2012 confirmation that Iran had built an underground plant to enrich uranium to 20 percent, it seems both sides of the Iran Deal are banking on trust and transparency.

Yet, Israeli Prime Minister Benjamin Netanyahu and Republican lawmakers are not buying it.

On April 5, Netanyahu gave his opinion on where the talks failed on CNN's "State of the Union", saying,

“I think there's a third alternative, and that is standing firm, ratcheting up the pressure until you get a better deal.”

He added, “It does not roll back Iran's nuclear program. It keeps a vast nuclear infrastructure in place. Not a single centrifuge is destroyed. Not a single nuclear facility is shut down, including the underground facilities that they built illicitly.

Republican lawmakers have also held significant grievances over this deal, and Senator and chairman of the Foreign Relations Committee, Bob Corker, is planning on holding a committee vote on April 14 on whether Congress should approve any agreement reached by the United States to curb Iran's nuclear program.

The Best Option Available, I Guess…

This historic nuclear deal is by no means a light matter, and its implications partially determine the security or war in the Middle East and beyond in next few decades, possibly the next half-century.

The news of lifted economic sanctions spread through Tehran and other parts of the country like optimistic wildfire, whereas people rejoiced in the possibility of greater economic opportunity.

On the other hand, at a time when low oil prices have limited Iran's notorious ability to fund proxy violence, the boost in the Iranian wallet could spell greater turmoil in the Sunni-Shiite conflicts throughout the Middle East.

As a quick reminder, Iran helped the US and Iraqi forces recently drive out ISIS of Tikrit. Iran, like the US, does not like ISIS. Iran, unlike the US, may have fought alongside Syrian President Bashar al-Assad.

So far, the Shiite-dominant Iran has intervened in Syria, Yemen, Lebanon, Bahrain and Gaza.

Even in this last year, the commander-in-chief of the Iranian Revolutionary Guard, Mohammad Ali Jafari, said, “The Revolutionary Guards will fight to the end of the Zionist regime... We will not rest easy until this epitome of vice is totally deleted from the region's geopolitics.”

Iranian people seem to be looking forward to greater economic opportunity; critics of the looser sanctions fear that it might add a little more gasoline to the Shiite-Sunni divide.

What about the other end of the spectrum, the nuclear spectrum?

According to the BBC, a senior Saudi royal family member warned that a deal could prompt other regional states to promote nuclear fuel.

US Secretary of State, John Kerry, hopes the deal will stabilize the region and reduce the chance of a local atomic arms race.

Either way, the question remains: Is this deal the best option among a myriad of not-so-good options, or is this deal simply bad? Is a good deal better than no deal, or even a half-deal?

The framework, which is set to be finalized on June 30, does nothing to end Iran's nuclear ambitions. It doesn't even push for zero uranium enrichment.

The deal lifts some economic sanctions that could boost Iran's involvement in proxy conflict. The limited 10 through 15 year nuclear freeze in Iran simply puts the nuclear program on pause. As Obama stated,

"What is a more relevant fear would be that in Year 13, 14, 15, they have advanced centrifuges that enrich uranium fairly rapidly, and at that point, the breakout times would have shrunk almost down to zero.”

Yet, despite the limitations of this deal, it presents one of the most significant nuclear issues of the 21st century: the spread of nuclear weapons among more unstable states.

Pakistan and India have had nukes pointed at one another for decades, and in 2001 and 2002, these countries were dangerously close to nuclear bombardment.

Imagine Iran and Israel in the same position, with Saudi Arabia aiming at both countries.

Take a second and consider Slate's Middle East Friendship Chart, and then consider how the condensed region marked by thousands of years of sectarian conflict would fare with nuclear arms.

The Iran deal is by no means perfect, but it is also not the end-game in continual nuclear talks, economic sanctions for supporting terrorism, and diplomatic relations between Iran and the P5+1.

Critics who claim that America “caved” in the deal, who call for Iran to completely abandon any uranium enrichment activities, seem to have forgotten that this is a deal and not a punishment.

Instead, it stands as the essential milestone between Iran and the West, where opened diplomatic cables, communication, and cooperation can, at least, curb Iranian nuclear proliferation and create a barrier between fast and secretive weapon building.

Another option is, of course, is to demand too much, punish instead of negotiate, and ultimately, sever potential diplomacy as a show of muscle and pride.

Citations: A Calculated Risk (The New Yorker), Rouhaniu2019s Bet on the Iran Deal (The New Yorker), The best of bad options (The Economist), In Tehran, Optimism and Talk of Revival After Nuclear Deal (New York Times)