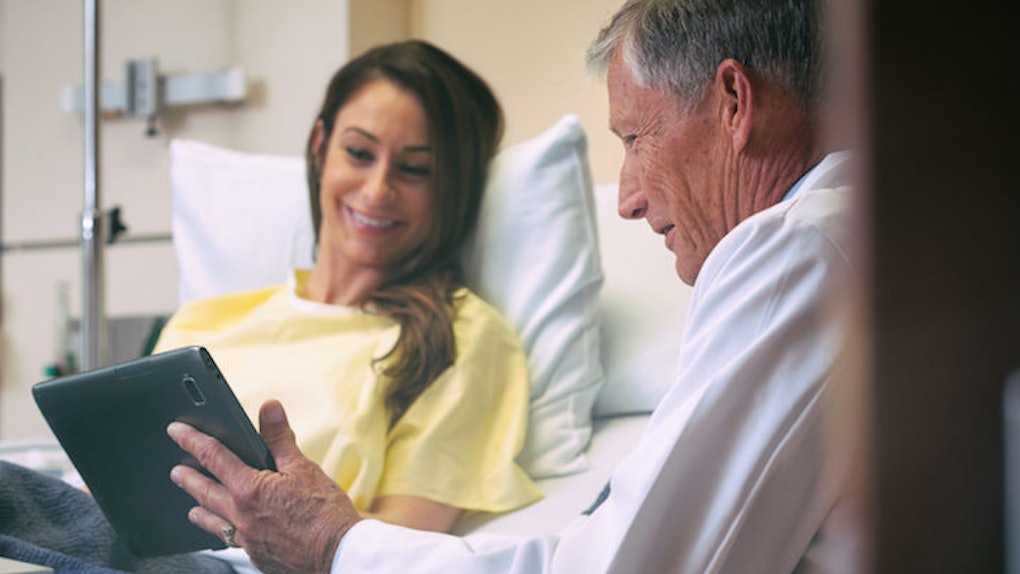 America’s health care system is f**ked. I would know. I’ve had more encounters with it than I’d care to count.

At age 21, around the time my peers were exploring the thrilling new world of clubs and bars, I was living out of my room, bedridden and sick after being diagnosed with lupus.

The chronic inflammatory disease attacks the tissues and organs, affecting each of its victims in very different ways. Mine was inflicting serious harm to my kidneys, heart and lungs.

Three near-fatal episodes over the course of four years rendered the hospital my second home. It’s where I learned the disturbing truth about the medical establishment: It doesn’t care about me as much as it cares about raking in a fat profit.

In 2013, journalist Steven Brill looked into why our medical bills are so high. What he uncovered was a hard pill to swallow … literally.

Hospitals often charged patients wildly inflated rates for everyday items, including $15 for a Tylenol, $8 for tissues, $10 for the little cups used to dispense medicine and $53 for a pair of non-sterile gloves.

The health care market is not a market at all. It’s a crapshoot.Everyone fares differently based on circumstances they can neither control nor predict.

The Affordable Care Act, better known as Obamacare, took effect in March 2010 with the aim, among others, of containing such costs.

It also was enacted to get the approximately 60 million Americans without health coverage insured.

United Healthcare screwed me in mid-2013 by kicking me off my plan for failing to pay my premium on time, even though I’d never received a bill. I filed a string of appeals, all of which were rejected, presumably because of my pre-existing condition.

Living uninsured is a nightmare for a chronically ill patient. My lupus could have flared up again, landing me in the hospital and incurring me a lifetime of debt. A month’s supply of CellCept, the immunosuppressant drug saving my life, costs upward of $500. How could I afford it as a student?

I’m lucky I have parents who were able to take care of my medical tab, which ran in the thousands every month, for the half-year I was without health insurance. But what about those with conditions similar to mine whose families can’t pay the bills?

Thanks to President Barack Obama’s signature health care plan, this is no longer a concern. The ACA forbids insurers from denying coverage to people with pre-existing conditions.

By expanding Medicaid to include families with an annual income of less than $31,000, the Affordable Care Act has also eased the financial burden of health care on low-income families and individuals.

Obamacare is a step in the right direction but by no means perfect.

Loopholes in the law enable the medical-industrial complex to persist profiting off sick people.

I thought the tide was changing when I was able to effortlessly enroll in a health care plan through Covered California, a state-run exchange established under Obamacare.

But then came the rude awakening: Being insured doesn’t guarantee care.

In September 2009, four out of nine doctors were threatening to quit if Congress passed the ACA, which called for increased regulations and declining reimbursements.

Some enterprising physicians, however, found a way to side-step Obamacare and maintain their profit margins after the bill was passed. How'd they do it? They just altogether stopped accepting insurance.

My health issues were so complex that not only did I need top-tier doctors but I needed tons of them: rheumatologists, nephrologists, pulmonologists, cardiologists.

But physicians were wary taking me on as a patient because Obamacare would not pay them as much as private insurers. My choices then became to either pay cash or receive low-quality care.

But it wasn’t just me with this dilemma. The resistance of doctors to comply with the law became a huge problem for many covered under state exchanges. I was confused. Haven’t physicians taken an oath to treat the sick to the best of their ability no matter what?

By paying a few hundred dollars more per month, I eventually secured better coverage through a Covered California Anthem plan, which most doctors accept. But I again thought of those who weren’t able to afford platinum coverage and how their standard of care would be worse than mine.

The upcoming presidential election is a crucial one, especially in terms of health care. A Republican president may try to repeal Obamacare. Hillary Clinton will keep the ACA but reform it. Bernie Sanders will push for an entirely new single-payer system.

For some reason, socialism has become a dirty word in American politics. But all a single-payer system would do is shift the cost of health care to the government, something almost all major industrialized nations, including the UK, already do.

Often termed “Medicare for all,” single-payer health care would call for the federal government, rather than private insurers, to compensate hospitals and physicians for treatment. Families able to afford it would make a minimal yearly payment to cover costs.

Sanders’ plan also proposes divorcing health care from employment, which means we no longer would have to remain in sh*tty jobs just for the insurance.

Critics of single-payer health care argue that such a system is untenable and too costly. But Sanders believes a few tweaks to our tax policy, including the enactment of progressive tax rates and creating limits on tax deductions for the rich, should make his plan plausible.

Insurers and doctors are opposed to single-payer health care because their profits may take a hit. But for patients, Sanders’ plan would remove the hassle and stress associated with navigating and affording medical care.

Even if Sanders takes the White House, however, Medicare for all is a long way away. For him to win the cooperation of Congress will be no easy feat.

The alternative to a single-payer system and Obamacare is the GOP plan, which centers on tax credits and repealing the ACA.

On top of disrupting the coverage of millions of Americans insured under Obamacare plans, it will base its tax credits on age — the current system is based on income, so the poor are given more assistance — and weaken the current protections offered to those with pre-existing conditions.

The tradeoff? Plans will be less comprehensive and cheaper.

Jeb Bush, before withdrawing from the presidential race, described his health care plan, which is similar to Marco Rubio’s, as offering coverage for only catastrophic events, adding,

...whatever else people want insurance to cover, they’ll be able to buy and we won’t force people to buy coverage they don’t want.

The road to repealing Obamacare, however, is also full of obstacles. A Republican must first win the White House, and even then, Democrats could block the proposal in the Senate, given Republicans don’t eliminate the filibuster.

Higher taxes may be off-putting, as may be the idea of a socialist health care system, because of how we Americans have been programmed. But at the end of the day, the cost seems well worth it if everyone is able to receive the medical care he or she needs.

No challenges in my life have been as difficult to endure as those related to my health. Still, I’m grateful for the experience.

Being sick helped me gain perspective, empathy, compassion. If a few dollars out of my paycheck guarantees a low-income cancer patient receives the same standard of care as a wealthy one, I’m more than willing to contribute.

When you step into the voting booth this November, I encourage you to consider health care. See it not as a privilege but as a human right.