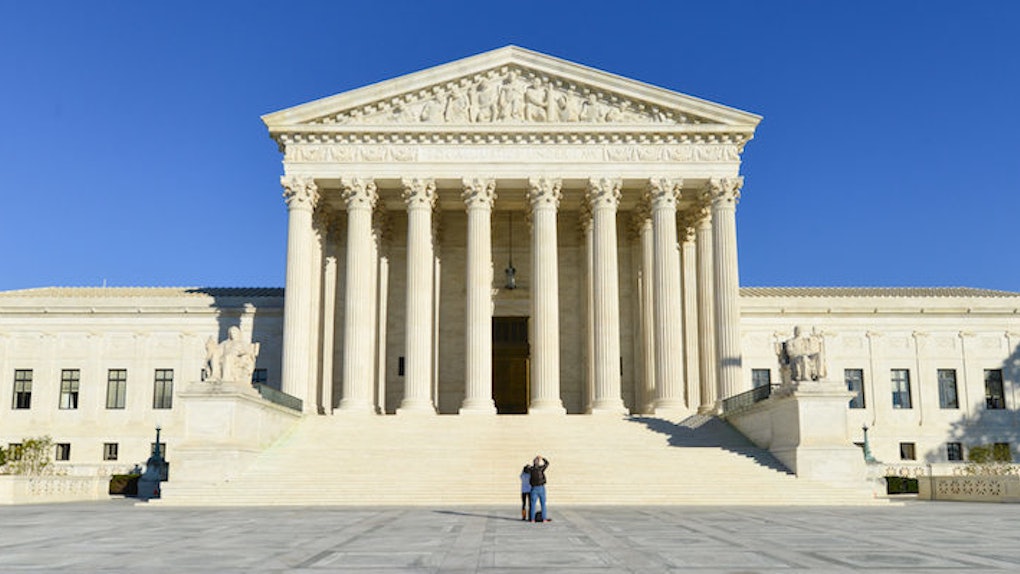 Why Homophobia Should Have No Place In The Supreme Court

As you've probably noticed, the Supreme Court heard the oral arguments on April 28 regarding the Obergefell v. Hodges case that could legalize same-sex marriage everywhere in America.

During the proceedings, a spectator in the back stood up and started yelling about how homosexuality is an abomination, supporters of gay marriage will burn in hell, etc. – you know, all the passion-driven religious arguments against granting marriage equality. Nothing new here, folks. Move along.

At least one person didn't move along, though. And unfortunately, he was one of the people sitting at the front of the room in black robes.

As security dragged the man out, Justice Antonin Scalia, the uber-conservative Reagan appointee, made a hilarious joke: “It was rather refreshing, actually.”

Besides leaving us all wondering why he hasn't ditched the legal stuff to pursue a career in comedy, the joke offered an insight into his opinions on the subject that find no basis in what the Constitution does or does not guarantee.

It was like Obama at the White House Correspondents' Dinner – funny because, to Scalia, it was true.

Although he has often tried to couch his abject homophobia in more legitimate-seeming arguments, like the claim that laws protecting people from discrimination based on sexual orientation grant that class of people “special rights,” there's really nothing else to it – Scalia is a homophobe, and he's pissed his side is losing this particular battle.

And really, he hasn't exactly tried to hide it. In the context of various cases, he has compared homosexuality to child pornography, animal cruelty and even murder.

He has compared homosexual partnerships to “long-time roommates” and claimed that laws banning homosexual conduct were OK because gays and lesbians could just have sex with an opposite-sex partner instead.

Yes, you've understood all of that correctly, and it's not worth troubling your mind over the intricacies of Scalia's thought processes there.

The important thing is that the other justices seem to be looking at it from a more reasoned standpoint.

The question is about whether the Constitution protects the rights of all people to marry whomever they want to, and none of the other justices seem to be relying so heavily on their personal biases.

Although the conservative side of the court seems wary of denying states' rights on an issue that has been so divisive over the past couple of decades, we have all witnessed the changing tides here.

Fifty-five percent of America now supports marriage equality, and we have done a lot to push that forward – seven in 10 Millennials support the rights of gays and lesbians to get married, and we should be proud of that.

We're seeing discrimination for what it is, and we're swaying other people with our open minds.

For example, early on, I convinced my mom same-sex marriage should be legal, which gave the country one more supporter from an older generation – and I'm sure I'm not the only one to have done that.

Now that we can all vote, our voices matter. Politicians are listening – or they should be if they want to get elected, anyway.

The Supreme Court stands apart from our elected officials because that's how our democracy works, but that doesn't mean they're deaf to the dialogue going on outside of their chambers.

Conservative groups have relied on warnings of impending doom and questionable science to support their case against legalizing gay marriage, but once you strip away the parts they got from the Bible (which are, of course, not admissible in the legal system of a country with a division of church and state) and the unfounded, pseudo-scientific claims, they're left with no solid argument.

It's about granting people equal rights, plain and simple. Up until now, we've seen a typical case of the straight majority passing down a decision about the rights of the homosexual minority.

It's discrimination; it's unfair, and it needs to end.

It's out of our hands though and into Scalia's. It can be safely assumed that Scalia and his conservative colleagues Samuel Alito Jr and Clarence Thomas will vote to uphold the bans and that four justices – Elena Kagan, Sonia Sotomayor, Stephen Breyer and the Notorious RBG (that is, Ruth Bader Ginsberg) – will vote to strike them down.

Justice Anthony Kennedy, who has ruled in favor of gay rights at three important points, is the usual swing voter, but even Chief Justice John Roberts could be showing some signs that he might swing that way too this time.

We'll find out for sure in June, and up until then, we'll just be left wondering. Will the dinosaur, with his old ideas and homophobic jokes, have his way? Or will progress come out on top?

For now, we can only hope that at least five of the Supreme Court justices will see Scalia's argument for what it is – bigotry – and ignore it.