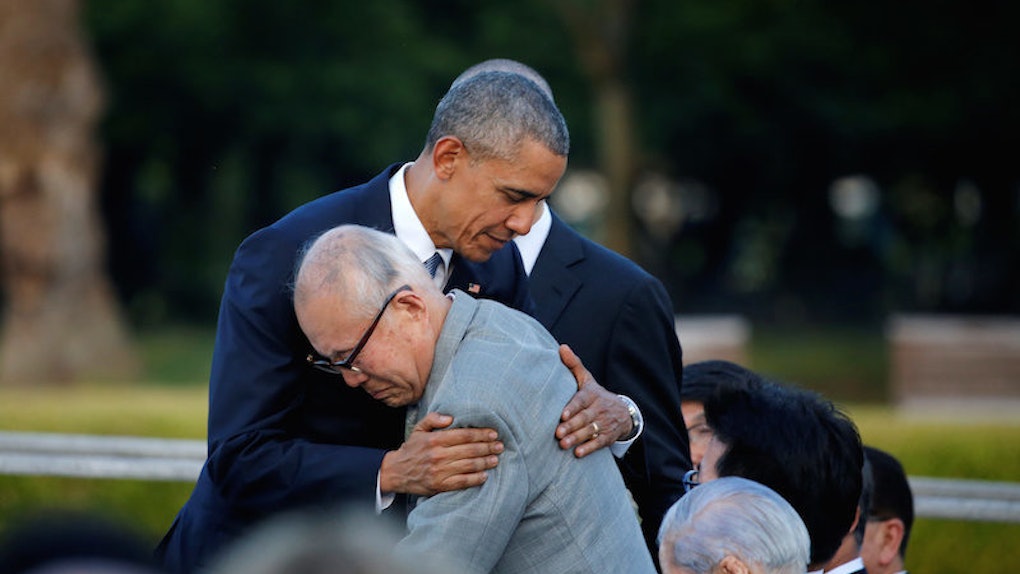 This Hiroshima Survivor Did Something Truly Amazing For Prisoners Of War

On Friday, Barack Obama became the first sitting US president to visit Hiroshima, Japan where America dropped an atomic bomb during World War II on August 6, 1945.

The bombing of Hiroshima continues to incite controversy. It was the first time an atomic bomb was ever dropped, and it immediately killed 70,000 people and radiation exposure lead to the deaths of around 70,000 more.

Several days later, on August 9, the US dropped another atomic bomb on Nagaski.

Nine days after the initial bombing, on August 15, 1945, Japan surrendered and the war was over.

The quick cessation of the war has led many to argue dropping the bombs was worth the astronomical level of death and destruction they produced. People who champion this argument often contend that dropping the bombs prevented more lives from being lost by bringing the war to an end.

Others contend it was crime against humanity that catapulted the world into an era of weapons of mass destruction. Moreover, some also argued Japan would have surrendered regardless, including former President Dwight D. Eisenhower, who also served as the Supreme Commander of the Allied forces in Europe during WWII.

In Hiroshima, the president delivered an impassioned speech in which he called for a "world without nuclear weapons."

Seventy-one years ago, on a bright cloudless morning, death fell from the sky and the world was changed. A flash of light and a wall of fire destroyed a city and demonstrated that mankind possessed the means to destroy itself. Why do we come to this place, to Hiroshima? We come to ponder a terrible force unleashed in a not-so-distant past. We come to mourn the dead, including over 100,000 Japanese men, women and children, thousands of Koreans, a dozen Americans held prisoner. Their souls speak to us. They ask us to look inward, to take stock of who we are and what we might become... We may not be able to eliminate man's capacity to do evil, so nations and the alliances that we form must possess the means to defend ourselves. But among those nations like my own that hold nuclear stockpiles, we must have the courage to escape the logic of fear and pursue a world without them.

While the president fell short of offering an apology for what happened, which some championed and others feared and criticized, his poignant words were particularly well received by a survivor of the Hiroshima bombing, 79-year-old Shigeaki Mori.

Following the speech, the president and Mori shared an emotional embrace. This was an especially powerful moment given Mori was not just a survivor of the Hiroshima attack, but also spent a significant portion of his life researching the fates of the 12 American POWs who were in Hiroshima at the time of the bombing and were also killed.

According to Will Ripley of CNN, who interviewed Mori, the Japanese man felt strongly that even former enemies of his country deserved closure.

Mori, who happens to be a historian, researched the details surrounding the captivity of these American POWs, contacted their families to provide new information and worked tirelessly to ensure they were properly honored by having their names placed on the wall of the Hall of Remembrance in Hiroshima Peace Memorial Park.

This is a beautiful story of humanity in the wake of war, death and destruction.

Mori was eight when the bomb was dropped, and remembers it vividly. He said,

I remember the blast suddenly hit me from above. I was blown off the bridge and fell into the river. Because the river was shallow...and the waterweeds growing thick, I survived without injuries and burns.

His primary school was apparently just 400 feet from ground zero, and the blast killed all the students and teachers. At school, Mori said he could see a small number of American POWs held at a police headquarters nearby.

It restores your faith in humanity that a man so connected to this catastrophic event went to such efforts to honor the lives of American service members, who fought for the nation that destroyed his home.

The world is a far better place when former enemies learn to look past their differences, and it makes the possibility of lasting peace between nations feel decidedly less farfetched.