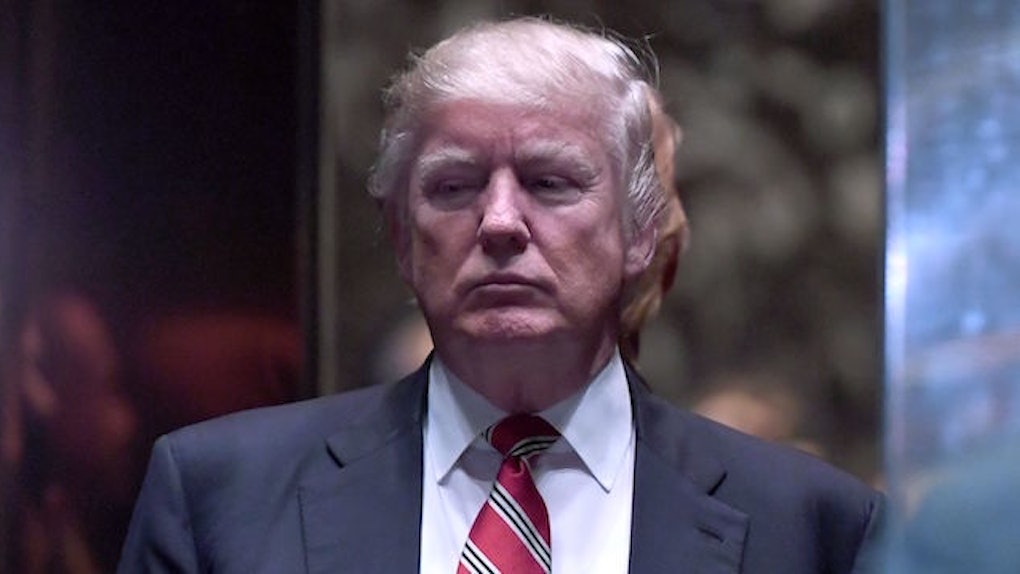 Why It's Important To Back Donald Trump If You Hate Him

On January 20, 2017 every individual will have to accept that Donald Trump will officially be our President. If you deny or ignore the fact that he has already been elected to run our country, you are holding us back.

This year is about acceptance. It is important we accept this reality and stop trying to outsmart it or find some loophole to avoid it.

Maybe this is not what you wanted, but the faster you come to accept this reality, the faster our country can recover as a whole and move on to more important issues. Refusing to accept and boycotting President-elect Trump will only tear us apart faster.

We must accept finite disappointment, but never lose infinite hope.

I refuse to believe that as a nation we cannot grow stronger from this. It is essential to put aside all political differences because acceptance will be the final word.

No one individual will ever be able to please an entire nation, but accepting someone's flaws and growing as a whole will be what our country needs to focus on in order to progress and thrive. John F. Kennedy said,

Let us not seek the Republican answer or the Democratic answer, but the right answer. Let us not seek to fix the blame for the past. Let us accept our own responsibility for the future.

Countless people are so concerned with Donald Trump spreading hate and intolerance, yet those very same people are ones degrading and marginalizing people because of who they voted for.

They are the ones protesting, causing havoc around the nation, and trying to use yet another platform of hate as a means of bringing this great nation together.

Millions of Americans, both for and against Donald Trump, have been asking that the system be changed for a long time, and using hate to bring about change does exactly the opposite.

Keep in mind, all elected officials, such as members of Congress and the president, work for us, the people. We have to be vigilant about their decisions and hold them accountable. We have a responsibility to communicate with them in meaningful ways, rather than just tweet irresponsibly. It is irrelevant what party you stand for, because it will not change the outcome.

While I fervently hope America can come together, I acknowledge that on both sides anger is masking fear.

To those people, I say we fully understand your logic. But, in the end, we cannot continue to hate Donald Trump.

Americans have every right to be worried. But it is time to take action by spreading peace, love, and respect throughout our nation. Taking away the negative energy and helping to unite our country is very important. It will be a drastic change for the United States, but people need to give him a chance. After all, as of January 20 2017, he is our president for at least the next four years.

Get on board with making this nation great again, because we ARE moving forward. Whether we are soaring high, or spiraling to a crash is entirely up to us, the citizens of the United States.

We all want the same outcome for America, but to achieve that President-elect Trump needs our support. We are in this together and only together can we truly make America great again.