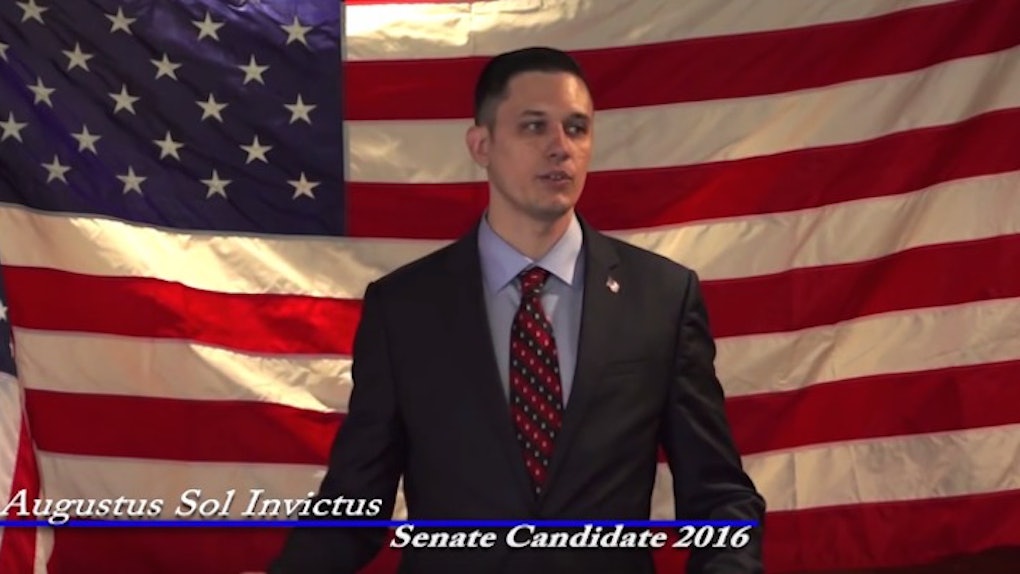 Guy Sacrificed A Goat, Drank Its Blood, Wants Your Vote For Senate

Most political candidates have something in their past they'd like to hide.

For many, it's smoking pot, or voting in favor of something they later regret.

But not Augustus Sol Invictus. He regrets nothing. Including that time he sacrificed a goat and drank its blood.

Invictus, a 32-year-old former lawyer and current candidate for Senate in Florida, gives zero f*cks what you think about his past dalliances with the devil.

According to Invictus, the goat sacrifice happened as part of a pagan ritual.

As the BBC reports, in 2013, Invictus walked all the way from central Florida to the Mojave Desert, where he spent a week fasting.

Following his fast, he returned to Florida, killed said goat, drank its blood and gave thanks to the god of the wilderness.

He told the Associated Press,

I did sacrifice a goat. I know that's probably a quibble in the mind of most Americans ... I sacrificed an animal to the god of the wilderness ... Yes, I drank the goat's blood.

And while he is cool with admitting to sacrificing animals, he is admittedly denying other accusations against him, including claims he is a white supremacist and wants to start a civil war.

But, even without all the animal sacrifice stuff, Invictus doesn't really stand a chance at election. He can't even get the support of his own party, the Libertarians,  who are currently trying to disown him.

Adrian Wyllie, chairman of the Libertarian Party of Florida, told the Orlando Sentinel,

He is the absolute exact opposite of a Libertarian. He's a self-proclaimed fascist. He's promoting a second civil war. It's absolute insanity. We must explain to people this is the opposite of Libertarians. This guy has no place in the Libertarian Party.

Oh, and in case you're wondering, no, Augustus Sol Invictus is not this guy's given name. He changed it to the Latin phrase meaning "majestic unconquered sun." He refused to tell reporters his birth name.