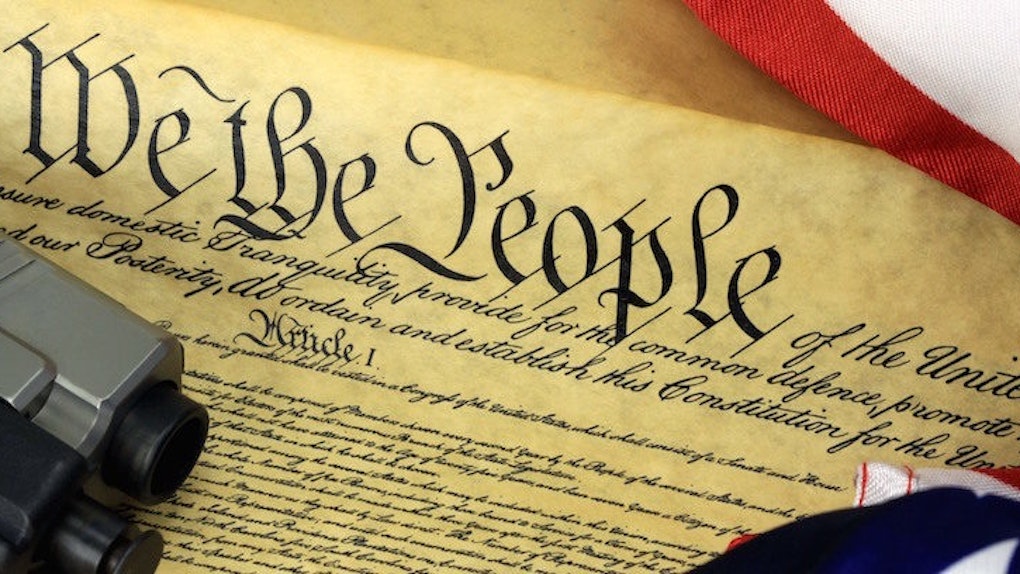 Why Gun Control Laws Might Actually Be Written Into Our Constitution

Gun control has been an ongoing debate in America. It's a debate that resurfaces in the headlines every time there is the all-too-frequent mass shooting.

Those opposed to stricter gun control in the US have argued that stronger regulation of firearms goes directly against the Second Amendment.

But the Second Amendment isn’t just “the right to keep and bear arms shall not be infringed.” There’s more.

The first part of the Second Amendment shouldn’t be ignored or disregarded. “A well regulated militia being necessary to the security of a free state…”

The militia is composed of “we the people.” Not the military.

Therefore, the guns of the people (or the militia) need to be well-regulated.

Regulation doesn’t mean banning all the guns in America (even though that worked in Australia). It means the use, obtainment and types of fire arms in America need to be well-regulated.

This is also known as gun control.

The mental stability of the people who can obtain these weapons is an important component. But just as important is the weapon itself.

One can argue “guns don’t kill people, people kill people” all they want. But the weapon someone has in his or her hands obviously makes a huge difference in the damage that can be done.

Both the person and the weapon need to be addressed.

Obama’s gun control proposals in 2013 struck a perfect balance, and it’s terrible they weren’t passed by the Senate. Military-style assault weapons would have been banned, since they’re intended for the military and kill many.

People could still own handguns for self-protection, and they could also still go hunting.

Another big argument against stricter gun laws is, if the government turns against its own people, we need to be able to defend ourselves.

Not only does that seem paranoid, it’s almost comical. If the government really wanted to turn against citizens, some assault rifles would be a joke, compared to drones or any other advanced military weapons.

We live in a democracy, not a dictatorship.

Our nation is constantly growing and changing.

The Founding Fathers were ahead of their time. Our militia needs more regulation for the security of our free state. Our state isn’t secure if innocent civilians can be so easily murdered when weapons are put in the wrong hands.

According to Mother Jones, out of the 143 guns used in mass shootings from 1982 to 2012, more than three quarters were obtained legally. This debunks the dismissive argument that banning weapons with high-capacity magazines won’t help.

The Second Amendment isn’t about letting Americans have all the guns they want. It’s about balance.

The First Amendment has restrictions and regulations because it makes sense, and it is important for the well-being of American citizens. Gun regulation makes sense right now. There is a clear problem.

We can dismiss initiative and say that regulation "won’t make a difference," or "if a criminal really wants a gun, they’ll get it."

Or we could do something, and do something without “treading on” rights. Because not doing something is a slap in the face to the people who lost their innocent loved ones in a senseless act of violence.

We must be humane and try. We can’t know if stricter regulations will prevent these acts of violence, but there’s a blatant problem in America that needs attention and action.

The Second Amendment shouldn’t be misinterpreted as an excuse to do nothing.