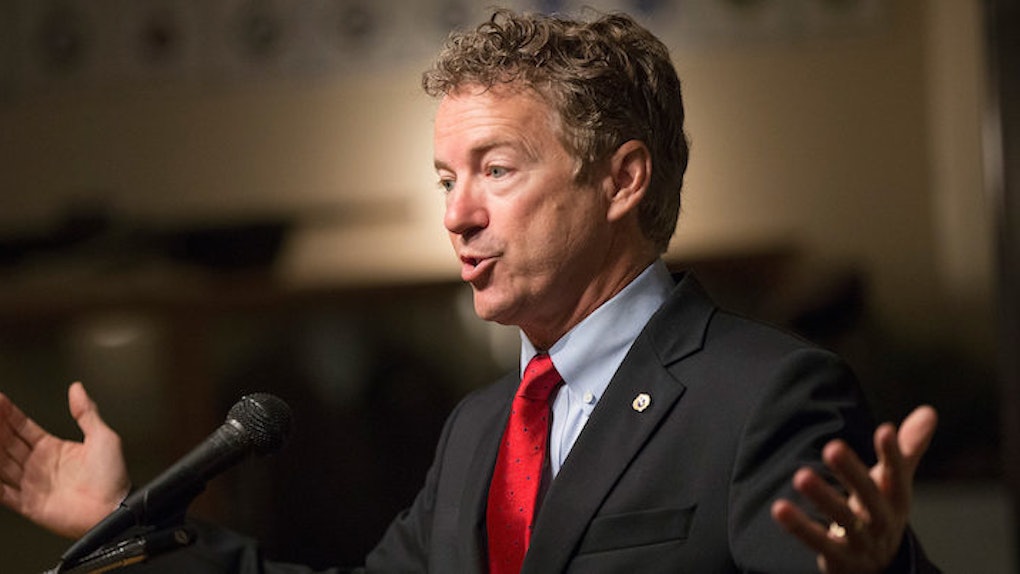 It's no secret this race and the media's coverage of it have been dominated by real estate mogul Donald Trump thus far.

We can't totally ignore Trump, as he's currently the Republican frontrunner, but he's hardly the only candidate. Given the amount of attention he gets, however, it's often difficult to remember this.

So instead of focusing on what Trump said during last night's debate, or who attacked Trump and what they said, let's try something different for a change.

Here are three things about the GOP debate that have nothing to do with Trump.

Senator Rand Paul is somewhat of an enigma in the Republican party. On social issues like abortion and gay marriage, he is on the same page as many of his fellow conservatives (he opposes both).

But on foreign policy, Paul's libertarian perspectives often lead him to sound decidedly isolationist and even somewhat liberal at times.

Paul frequently favors diplomacy over interventionism or hawkish policies, offering support for renewed relations between the US and Cuba, for example. This is very uncharacteristic for anyone who aligns with the Republican party.

Last night, Paul once again strayed from the pack and offered a very logical perspective regime change, something Republicans often push for. He said,

When you take a look at the impact of the Iraq War and its connection to the rise of ISIS, it's hard to disagree.

Paul also made some very sound points on terrorism in his opening remarks, stating,

These points resonate decidedly similar to many made by President Barack Obama in a recent address from the Oval Office. They also fall in line with some of the perspectives of Senator Bernie Sanders, who opposes deploying US troops to fight ISIS.

If you don't agree with Paul on social and economic issues, it's easy to write him off. But on foreign policy, he frequently makes valid and well-articulated points.

Again, @RandPaul makes the most sense on foreign policy, and sounds the most presidential. And he's awful. #GOPDebate — Jamil Smith (@JamilSmith) December 16, 2015

Rand Paul has his father's uncanny ability to make Democrats go "wait, why do I agree with this person?" every so often. #GOPDebate — Joy Reid (@JoyAnnReid) December 16, 2015

Paul barely made the cut for last night's debate, and it seems very unlikely he'll receive the Republican nomination. But the points he made on Tuesday night were important and challenged traditional conservative viewpoints.

Cruz and Rubio, the sons of Cuban immigrants, faced off on immigration.

One of the biggest aspects of Tuesday's debate was the feud between Senators Marco Rubio and Ted Cruz. The two sparred, in particular, on the issue of immigration.

Most Republicans stand against any legislation or policies that would assist the 11.2 million undocumented immigrations currently living in the US.

Accordingly, Cruz attacked Rubio on the fact he supported amnesty for immigrants, something Cruz has vehemently opposed.

In 2013, Rubio co-sponsored a bipartisan immigration reform bill that would've offered a pathway to citizenship for undocumented immigrants. The bill ultimately failed, and it's something that continues to cause some people to question Rubio's conservative credentials.

It's notable Cruz did offer an amendment to the bill that would've taken away the pathway to citizenship while still allowing some undocumented immigrants to obtain legal status and work permits.

Rubio brought this up during the debate in an apparent effort to suggest he and Cruz aren't very different on this issue. But, as Vox notes,

Cruz did sponsor that amendment. You could make an argument that his sponsorship of it indicates that he once supported legal status — or you could note that many around Cruz insist the amendment was meant as a poison pill to reduce Democratic support and kill the bill as a whole. It more or less doesn't matter. What mattered is that Rubio gave Cruz a big chunk of the debate in which to remind base voters of the one issue where they don't trust Rubio at all, and to remind them that Cruz was on their side when it counted.

In other words, Cruz arguably won this segment of this discussion, and proved he's more conservative on the issue of immigration.

Both Cruz and Rubio are the offspring of Cuban immigrants, yet they essentially just squabbled over who is more anti-immigrant.

Chris Christie blamed the Iran deal for ISIS, which makes no sense.

At one point during the debate last night, Governor Chris Christie seemed to suggest the Iran nuclear deal, orchestrated by President Obama, is to blame for the rise of ISIS. He said,

This makes absolutely no sense whatsoever, and many on Twitter immediately expressed a mixture of confusion and outrage at Christie trying to make such a fallacious connection.

Is Christie implying that the Iran nuclear deal helped create ISIS? Or did I miss something? #GOPDebate — Amy Davidson (@tnyCloseRead) December 16, 2015

Iran does support Syrian President Bashar al-Assad, who is a horrible dictator responsible for taking the lives of far more of his own people than ISIS. This is certainly something to be highlighted, but Christie did so while telling a blatant lie.

ISIS -- Daesh, ISIL, the Islamic State, whatever you prefer to call it -- is not a product of the Iran nuclear deal or any particular actions of the Iranian government.

Not to mention, Iran is currently fighting against ISIS in support of Iraq.

The genesis story of ISIS is complicated, but it largely began as al-Qaeda in Iraq (AQI) in 2004 -- a consequence of America's invasion of Iraq in 2003.

When US troops withdrew from Iraq in 2011, it presented an opportunity for ISIS to gain more influence, which was compounded by the onset of the Syria conflict.

Regardless of whether or not you agree with it, the Iran deal had nothing to do with any of this.

It's important for America to be honest about the origins of ISIS, in order to avoid repeating the mistakes of the past.

There are many other highlights from last night's debate, but these are certainly among the most pertinent and revealing.

The next Republican presidential debate is on January 14, 2016.