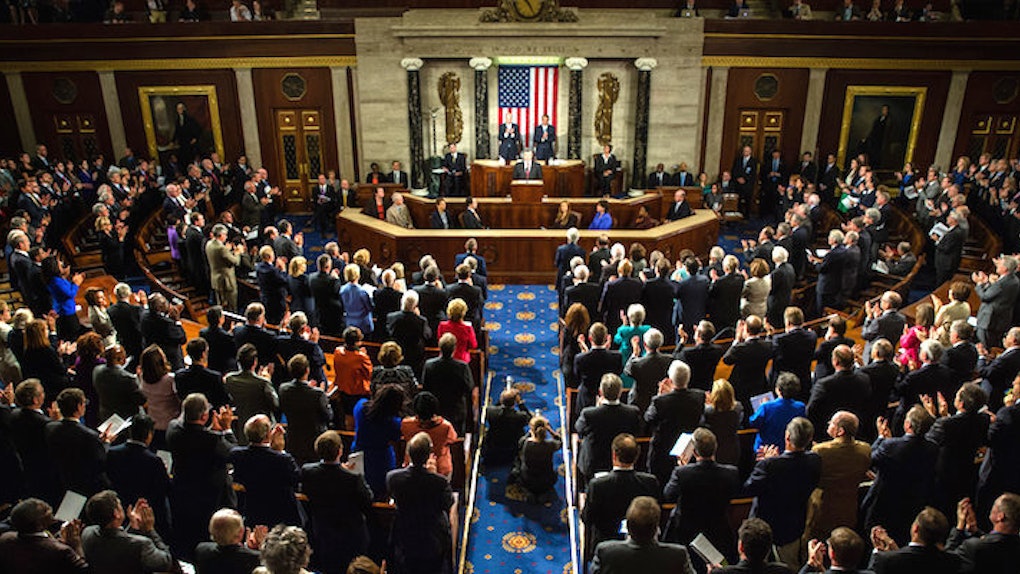 4 Reasons Why Millennials Need To Get Involved In Politics Today

Millennials are about to start running things. (Go figure; I was just about to start another "Law and Order" marathon.) Our generation is on the cusp of societal leadership. (Us? Yeah, I know; I just got rid of my "Jurassic Park" lunchbox.)

We’ve seen Millennials rise in areas of business, technology, the arts, nonprofit organizations and many other sectors. Like generations before us, we’re quickly becoming agents of change as we mature and take more of an interest in our communities. However, we also need to focus on making a difference in politics and public service.

NBC News reported that only 19 percent of voters were under age 30 in the 2012 presidential election. That number dropped to around 12 percent in the 2014 midterm election.

For a generation raised to believe our opinions matter and that we should get involved in as many organizations as we feel passionate about, we haven’t really done a stellar job utilizing our voices in terms of politics.

Some of us complain (sometimes rightfully so) about polarization and gridlock at many levels of government, and we are left wondering why bipartisanship is seemingly a dirty word from the Capitol to City Hall.

When many in our generation think of politics, they think not of the idealism and can-do attitude of "The West Wing," but, instead, Millennials envision the closed-door arm-twisting and political intrigue of "House of Cards."

To be fair, like those who have come before us and will come after us, we don’t (and won’t) have all the answers. It’s a byproduct of the human experience. That being said, we need to make our voices heard now, as the decisions being made today will impact us tomorrow.

I’m not kidding. All you have to do is show up. You’d be surprised by how important it makes you. Whether it’s through voting or active political involvement, such as supporting a candidate or an issue, our presence and contribution make a difference.

We can and should embrace posting our views on Facebook and Instagram. I’m guilty of over-posting (as many of my friends will tell you after checking their Twitter feeds), but the vote-driving in our generation will and does come from talking to people one-on-one.

Listening to voters and helping them devise solutions to their challenges is incredibly gratifying, and it often shines a light on issues in a way you may have not previously considered.

Prior to my first internship with US Rep. Ileana Ros-Lehtinen (R-Fl. 27th District) at the age of 16, my family’s political involvement, except for voting and discussing issues around the dinner table, was zero. I got involved because I thought it was important to do so, and even at the somewhat naïve age of 16, I figured I should try.

Truthfully, I picked Ros-Lehtinen because she had visited my elementary school when I was much younger, and her passion had stayed with me. I didn’t know anything about public service or politics, but the minute I started doing something, I felt like I could contribute to finding solutions.

2. Passion coupled with political and policy know-how is a virtue, not a vice.

We all have issues we’re passionate about. Education, the economy, student loan debt reform, foreign policy issues, same-sex marriage and many other issues top our policy priorities. The list is seemingly endless, but what many Millennials don’t realize is how the nuts and bolts of government work.

We’ve all seen the iconic School House Rock's “How a Bill Becomes a Law” video and have a general grasp of the constitutional workings of government; however, what we really need is practical education in how the political system works.

What forces precipitate the writing and introduction of a bill? How do issue groups work to support or undermine that bill? Why do some bills get a vote and media coverage while others die a quiet “death” before even one committee hearing?

Though we have a pretty good handle on fantasy football or the latest political intrigue on "Game of Thrones," we still consider our own government Byzantine. But, it doesn’t have to be unnecessarily complicated. (Though, to be fair, sometimes it is, despite our best efforts.)

Effectively translating our goals into results is a mechanism we’re all familiar with and should use, no matter what you do for a living or your experiences.

One of my favorite mentors was Ros-Lehtinen’s father, Enrique Ros, who was affectionately known as Abu Kiki. He was a master strategist who enjoyed teaching younger generations the ins and outs of running a successful campaign.

An important lesson I learned was from his encouragement to “know our precincts.” Why? Because at the micro (or precinct) level, you can garner a sense of what matters to people and what it may take to gain the support for particular issue or candidate. You can also determine the issues that actually impact people’s lives, what their hopes for the future are and who this set of individuals believes should be in leadership.

Using this information, you can help mold the political process and ensure your community has a voice at the table. Being able to draw upon a community’s collective wisdom and translate that into leadership and results is something we should never shy away from.

3. Innovation shouldn’t be a four-letter word in politics.

We often hear a new solution won’t work because “it’s never been done that way.” Setting aside principled objections, we shouldn’t seek to perpetuate the status quo just for the sake of the status quo. Innovation has been espoused by our generation.

Working to improve our broken immigration system, improving education in our nation, or reforming our tax code should be undertakings we embrace, despite which side of the debate we are on. Standing still while the world whizzes by doesn’t mean you’re in neutral; it means you’re effectively in reverse.

Our generation is arguably the most plugged-in, politically unconventional group of young Americans ever. We pick and choose policy issues (and our positions on them) not because they conform to overall ideological precepts, but because we think it’s the right course of action.

I’ve been lucky to grow up with many friends, probably more than I deserve, who are passionate about issues, politics or just results that can benefit our communities and nation.

Few will say, for example, “I’m a conservative, therefore I have to take X position on criminal justice reform.” Rather, they’ll say, “I’m a conservative, and I believe X is the right way to reform our criminal justice system. Here’s why, and why others, regardless of political affiliation, should support it.” They don’t feel constrained by ideology and are happy to work with an idea from the other side of the ideological spectrum, if it’ll produce results.

4. Let’s talk about the topics that won’t play in 30-second sound bites.

If we’re going to be serious about leading, we need to tackle complex issues that don’t easily translate to 30-second sound bites. Oversimplifying issues occurs when we attempt to cram too much information into too little time, thus doing a disservice to the underlying message.

Serious issues, such as entitlement reform, educational standards, criminal justice reform and how we treat the mentally ill, are neither easy to explain, nor easy to fix. Like it or not, our actions today, tomorrow and for the next 40 years will have repercussions on our children and grandchildren. Some of our decisions will result in surprisingly good results, and others will go unexpectedly awry.

We owe it to past and future generations to do our best to solve the complex issues of our time. No one is asking us to be perfect, but we are required to try.

For too many, making tough choices isn’t even an option. Even in our own hemisphere, many who wish to exercise fundamental democratic rights can’t under dictatorial regimes, such as those in Cuba and Venezuela. Millennials and older generations flee their native countries due to the lack of political and economic freedoms, forever grateful for the safe haven of democracy and freedom offered by the United States.

We’re on our way, but we still have much to learn.

Our generation has the potential to transform traditional politics. That’s not a hyperbole; it’s the truth.

Millennials have been criticized for being vapid, self-absorbed and indifferent, but I think we are just frustrated with the institutions. We’re poised to make the tough decisions, but before we do, we need to understand how we got to where we are and where we want to go.

Our future depends on it and each of us.