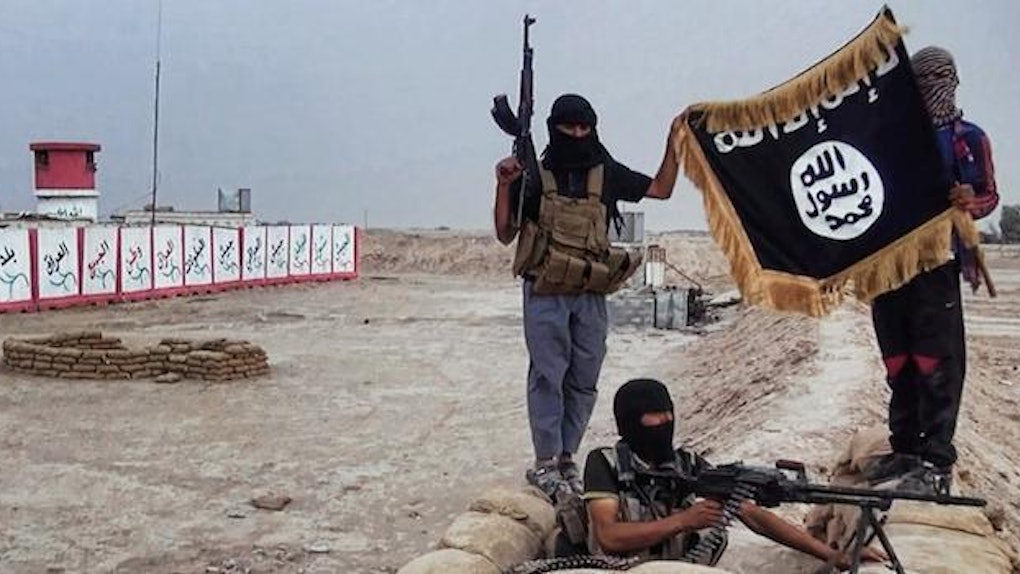 Fear And Faith: ISIS Maintains Power Through A System Of Reward And Punishment

Why would anyone set fire to food? You may ask.

The answer: to make a bold statement. To say, in no uncertain terms: We can give, and we can take away.

In a starving country such as Syria, where 9.8 million people need aid to prevent what the UN Food and Agriculture Association calls “food insecurity,” any and all food matters.

This rampant food deprivation makes it all the more puzzling that an organization such as Islamic State (or ISIS, or ISIL), decided to destroy boxes of chicken sent by the US to Syria to help the hungry populace.

ISIS deemed the chicken to have been “slaughtered unlawfully,” though the labeling on the boxes indicated otherwise.

It is theoretically possible that the chicken was not slaughtered by hand, but by machine. This would prevent it from being halal, or killed in adherence to Islamic Law.

How ISIS would know the food was actually not halal is unclear, since it was sent from an Illinois-based company called Koch Foods.

What is clear is that ISIS' destruction of food was a glaring act of defiance in a pattern of “charitable” acts committed by the organization.

In February of this year, ISIS seized control of food sent by the UN's World Food Program to Syria. They replaced UN labels on the boxes with their own, and distributed bags of wheat and flour to women and children.

In June of 2014, ISIS focused its efforts on distributing bread in the oil-rich Syrian province of Deir e-Zor.

A spokeswoman for Syrian news website Mubashir describes this seeming generosity as “the essential ingredient in gaining popular support.”

Deir e-Zor notoriously lacked sufficient supplies of bread, and ISIS' actions in the region appeared to be an effort to win over the populace by helping them. This is nothing new.

For decades, terror organizations have committed themselves to acts of charity as part of their campaign to win support.

Support, of course, is what enables terror organizations to prosper, gaining new followers, new land and new perpetrators of acts of violence.

Israeli scholar Reuven Paz notes Hamas, a US-designated terrorist organization opposing the existence of Israel, has committed about 90 percent of their “work” to “social, welfare, cultural and educational activities.”

As they pursue their goal of an Islamic-Palestinian state, they have also operated schools, hospitals, and religious institutions, helping them to “make strong showings in municipal elections.”

Even al-Qaeda has committed itself to acts of “good.” In 2005, Ayman al-Zawahiri, the leader of al-Qaeda, called on Muslims to aid earthquake victims in Pakistan.

In 2011, in the midst of a government breakdown in Yemen, al-Qaeda operatives came into government-built schools to teach.

In an article for the Kansas Journal of Law and Public Policy, law associate Jennifer Bell notes al-Qaeda provided essential electricity that the Yemeni government had neglected, dug water wells, and implemented a police and court system.

Distributing food, albeit stolen food, seems like a logical thing for ISIS to do. The act was in the tradition of terror organizations like Hezbollah, a militant group that succeeded and prospered by helping the poor and needy.

But if charity was so valued by terror groups, why would ISIS suddenly destroy food, with no clear intention of replacing it?

For the same reason it would seize control of about 40 percent of Iraq's production of wheat, to distribute food to Iraqis as it pleases: manipulation.

The expression that summarizes it best comes from German: mit Zuckerbrot und Peitsche, which translates to, “with sugarbread and whip.”

This is the German way of indicating a system of reward and punishment -- the equivalent of handing someone flowers, then slapping them in the face.

By controlling resources, like food, ISIS is able to exert its power and influence over its subjects. It may garner followers this way, but these will be fearful masses, terrified of losing access to food and farmland. Which is all part of ISIS' end game.

Religiously motivated terror organizations operate on the basis of faith and fear. They rely on the faith and sympathy of their most devoted members and constituency, and the fear of everyone else.

Whether it is fear from acts of violence, or fear of deprivation, it doesn't matter. Fear and faith keep everyone in control.

ISIS maintains this balance carefully, eliciting allegiance by fulfilling the desires of the needy in Iraq and Syria. Then, the group elicits fear: depriving Syrians of sustenance provided to them in droves by the US Herein lies its power.

It's far more antiquated in its religious sentiments. It's hyper-focused on apocalyptic notions. Its stricter adherence to religious ideas and teachings from the time of Muhammad makes it more predictable, in many ways.

But in its dependence on loyal supporters, its reliance on territory upon which to operate, and its manipulation of the population it lords over, it is like all other terror groups.

We have studied al-Qaeda, we have analyzed Hamas, and we understand the terror groups that have come and gone in decades passed.

So as much as we have misunderstood ISIS, potentially underestimating the capabilities of the organization, we can now move forward in our understanding.

In its vital similarities to other terror groups, like its dependence upon both faith and fear, we may be able to find predictable patterns of behavior within ISIS.

Inherent in these patterns is the kind of information that can make counterterrorism efforts easier, and ultimately help the US defeat an enemy who is at once unique, and nothing new.