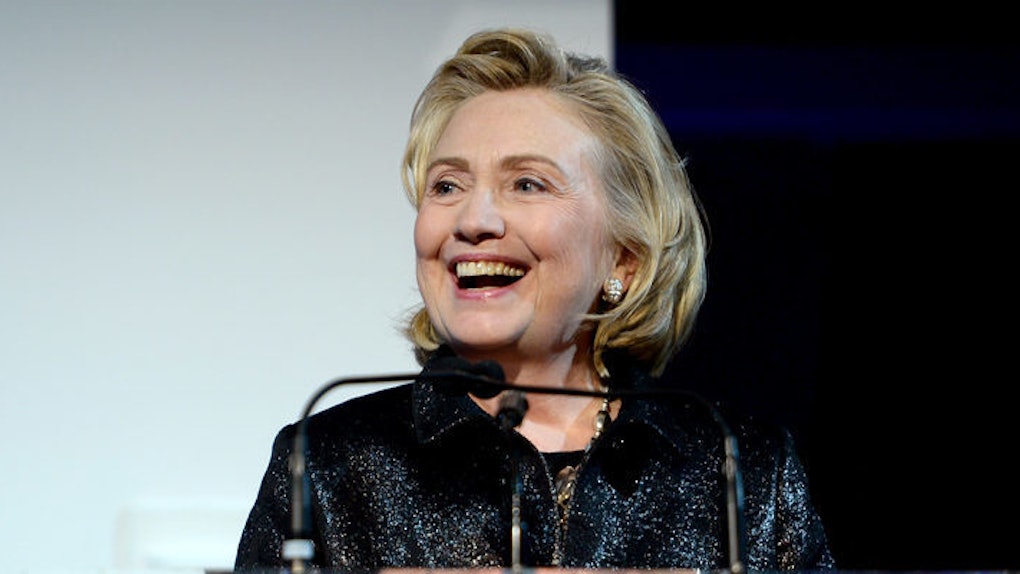 Social Media Myths Vs. Reality: Everything You Need to Know About Hillary Clinton

Crazy kids from Generation Insta-Share aren't consistently hopped up on politics. Hell, some of us aren't even registered to vote, and most of us don't have time to fact-check everything zooming across our timelines.

Does this make us a dumber generation? Hell no. But it does make us more interested in political players who are depicted more-so like celebrities.

Since her official announcement, the former Senator and Secretary of State has strategically targeted Millennials in her bid for the Oval Office and the White House. But just like a game of Telephone, wires have gotten crossed, resulting in mixed messages even Anthony Weiner would cringe at.

We put a pause on the chatter to flesh out common misconceptions and straight-up myths about Hill's political pedagogy, while defining where HRC truly stands on the issues.

The myth: Hillary plays to hip-hop

"We should be doing everything we can to get our young people more engaged in our democracy, not less." -Hillary — Hillary Clinton (@HillaryClinton) June 4, 2015

Where the Internet stands: Obama’s win in 2008 was the catalyst for making hip-hop’s voice an even more prominent vehicle to communicate with youth, so naturally rappers are beginning to mic check about Hillary, too.

“I think Hillary was the President already once,” 50 Cent told the Daily Beast, referring to HRC’s stint as First Lady. “Some of the things she says feel really comfortable, and roll off.”

Beyoncé, whose co-signs are more coveted than Yeezus’ sneakers, also endorsed Clinton by attending a fundraiser event for the presidential elect in NYC back in May.

Beyonce steps out in support of the Hillary Rodham Clinton Campaign Event pic.twitter.com/HDIjzFFqXv — The beyHive (@TheBeyHiveTeam) May 13, 2015

Led by the #BeyHive, Twitter erupted in unison, making grand assumptions about Hillary’s relationship with hip hop and Queen Bey, specifically. And, c’mon, when you have a pop megastar on your side, who can stop you from running the world?

Where HRC stands: “Hip-hop is America,” the Secretary of State proudly stated back in 2010 during an interview with CBS Sunday Morning’s Tracy Smith. "And so is jazz and so is every other form of music with American roots that tell a story."

Nowadays, she hasn't confirmed any other hefty pop-culture ties outside of Yoncé, but if Obama had HOV, there's no ballot outside of Bey and HRC's reach.

The myth: Hillary says "YAAAS" to everything

Where the Internet stands: Two words: Blurred lines. There’s a thin line between LGBTQ support and gay marketing ploys. And with Hillary’s newly-minted Loud And Proud “YASSS Queen” tees, we’re hardpressed to figure out which way Hill’s going to stand on same-sex matters. Is she appropriating a subculture in order to garner votes, or simply set on amassing attention to evoke social change?

Is she really down with LGBTQ or just in a race to be cooler than Barack? Gawker dug up some troubling info on Clinton’s old stance, where the former First Lady expressed her opposition to gays kissing gays: "I believe marriage is not just a bond but a sacred bond between a man and a woman.”

Where HRC stands: For now, with America reaffirming that #LoveWins, Clinton has stacked her chips in support of the LGBTQ community.

Like many of us, when the historical decision was made to legalize same-sex marriage in all 50 states, Hillary was all spirit fingers.

The myth: Hillary is solely a girl's girl

Where the Internet stands: The center of Hillary's presidential agenda is brewing with more answers to women's rights issues than an anti-aging "Hocus Pocus" potion.

But does being the Lady-In-Chief mean an automatic shift in gender equality, or will she forget about the rest of us in light of finally sitting at the good ol' boys table?

Where HRC stands: One thing's for sure, when it comes to women's rights, Hill's got you covered. Her 1995 speech at the Fourth World Conference on Women declared one important thing: “It is no longer acceptable to discuss women’s rights as separate from human rights.”

Since her infamous declaration, she's sprinkled her speeches with ambitious goals for progressive women across the board. Clinton isn't forgetting about the men in her life, however, allowing them to attend her just-for-women “Conversation With Hillary Clinton” event.

The myth: My President is(n't) black

.@nikkihaley is right 2 call for removal of a symbol of hate in SC. As I’ve said for years, taking down Confederate flag is long overdue. –H — Hillary Clinton (@HillaryClinton) June 22, 2015

Where the Internet stands: At first, Clinton was slower than a George-Bush speech to integrate race issues into her campaign, taking more than two weeks to address the killing of Michael Brown.

But recently, following the Charleston church shooting, Hillary has turned up the volume on hot-button racial debates and the importance of "strengthening communities."

Where HRC stands: During Baltimore's uprising after a black man was severely injured in police custody, Clinton declared it, "a time for honesty about race and justice in America.”

Later, she went on to tear into race issues further, pinpointing subtle racism and even gun violence. “Our problem is not all kooks and Klansmen," she said. "It's also the cruel joke that goes unchallenged. It's the offhand comment about not wanting 'those people' in the neighborhood."

HRC's newfound vocals on issues like these clarify where she can take things if the White House becomes her residence once again.