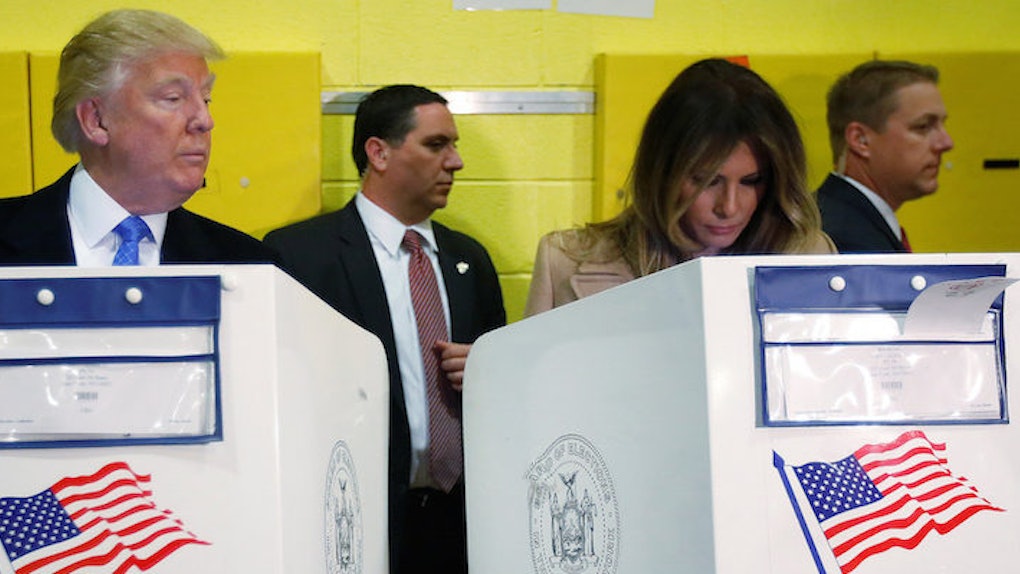 Election day is finally upon us, so the presidential candidates will be keeping a close eye on the polls today.

However, some candidates appear to be watching the polls a bit more carefully than other presidential nominees.

Upon walking into the polls, the Trumps were booed by a crowd of unhappy bystanders.

If that's not bad enough, someone also captured a photo of Trump voting that instantly became the internet's new favorite meme.

Trump didn't seem too confident about winning his wife's vote because he was caught peeking over Melania's shoulder as she voted for the next president of the United States.

Donald Trump doesn't even trust Melania to vote for him. (by @ToddDracula) pic.twitter.com/GVMyNGJyUv — CAFE (@cafedotcom) November 8, 2016

As you can imagine, the Twitterverse had a field day with this photo, and shortly after it ended up on social media, hilarity ensued.

A lot of people simply couldn't believe Trump was so insecure, he had to check to make sure his wife actually voted for him.

Many retweeted the photo with comical captions, basically saying Trump was worried his wife was secretly on Team Hillary.

While others pointed out Donald was probably just concerned Melania was going to copy Michelle Obama again and vote for the Democratic party.

Then there were the more imaginative Twitter users who decided to give the internet some insight on the possible thoughts of both Trump and Melania.

Plus, there were those political comedians who shared their predictions of what Melania's ballot looked like IRL.

Others poked fun at Trump by accusing him of cheating on his ballot...

...and low-key trying to copy his wife's answers.

Then there were the Twitter users who simply pointed out Trump has some serious trust issues.

But then again, it turns out Donald isn't the only one in the Trump family who seems skeptical about where his wife's loyalty lies.

Eric Trump was also spotted peering over wife Lara Yunaska's shoulder at the polls. Seriously, you can't make this shit up.

Let's just hope Melania made the right decision and opted for the most logical candidate -- Harambe, of course.