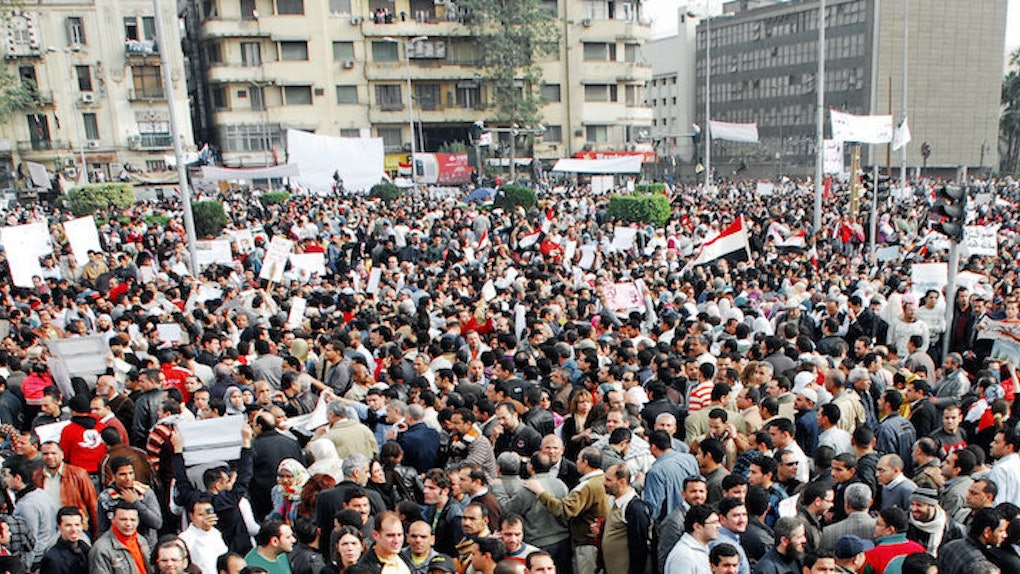 Egypt Started A Revolution 5 Years Ago, But Freedom Seems Further Away

Five years ago, on January 25, 2011, Egyptians came out to protest in major cities against the decades-long rule of Hosni Mubarak. They wanted democracy, freedom and to have their voices heard.

The protestors flowed to Tahrir Square in Cairo as the movement grew and grew and on February 11, Mubarak resigned.

But you'll find little evidence of the anniversary at Tahrir Square.

In the weeks leading up to January 25 this year, the government encouraged people to celebrate Police Day, an old official holiday, on the 25th.

This looks like part of a larger scheme to stop any protests or commemoration of the 2011 revolution, as the current government fears the people again rising up.

Despite two revolutions in the last five years, Egyptians appear to be getting further away from real freedom.

The January 25th Revolution was sparked by protests in Tunisia that ousted Ben Ali, who had been president since the late 1980s. Protests erupted in Libya, Yemen, Morocco, Bahrain, Syria, Algeria and other nations across the Middle East in what's called the Arab Spring.

With the toppling of Mubarak, there was a surge of optimism that Egyptians could have the freedom they had so long desired. That optimism was short-lived.

A democratic election was held in 2012, with Mohamed Morsi winning 51.7 percent of the vote to become president. But Morsi is an Islamist member of the controversial Muslim Brotherhood.

In the summer of 2013, Egyptians again took to the streets to protest -- but this time against Morsi's religiously-leaning rule. Abdel-Fattah al-Sisi, then a military general, led what may or may not have been a coup d'état to kick Morsi out of power.

Sisi won a democratic election in 2014 to become president, with a suspiciously high 96.1 percent of the vote. He has remained in power since then, and the country has been slipping further away from the democracy and freedom they fought so hard for.

In addition to promoting Police Day on January 25th, the government is cracking down on potential activists and protestors to prevent any demonstrations from happening.

Two people who were running Facebook pages were arrested this month for supporting the Muslim Brotherhood and encouraging protest.

Since Sisi took power, activists from religious Muslim Brotherhood members to secular college students have disappeared and been arrested and exiled. A protest law was passed in fall 2013, which led to a mass of arrests.

The law, arrests and disappearances have been criticized by Amnesty International.

In 2015, Egypt became the "second worst jailer of journalists worldwide" after China, according to the Committee to Protect Journalists.

There has been a growing sense of distrust and unhappiness with the Sisi government, but also a sense of hopelessness as the government takes more power and the people are still recuperating from two revolutions.

Peter Hessler at the New Yorker said in 2014 he sensed "the presence of some undefined and undirected frustration" living in Egypt.

The Muslim Brotherhood was banned and its political party dissolved in August 2014.

Although many Egyptians may not support it, the group's presence at least represented democracy -- a choice in political parties and an opposition to those in power. The government has been harshly going after the Brotherhood, arresting members and sentencing many to death.

Last fall, the government held its first parliamentary elections since 2011. Basically no one showed up, either in protest or as a sign of frustration.

On the eve of the fifth anniversary of January 25, Said Boumedouha, Deputy Middle East and North Africa Programme Director of Amnesty International, said in a statement:

Five years after euphoric crowds celebrated the fall of President Hosni Mubarak, the hopes that the '25 January Revolution' would herald a new era of reforms and respect for human rights have been truly shattered. Egyptians have been made to watch as their country reverts back to a police state.

So far, the Arab Spring has not wielded democratic stability for nations. Tunisia, which started it all, is the closest to a success story, with the group that pushed for democracy winning the Nobel Peace Prize in 2015.

But even with the progress, there has been huge unrest this week. Syria, meanwhile, is falling deeper and deeper into chaos and destruction.

Many, including Arab Spring leader Iyad El-Baghdadi, have argued that five years is not nearly enough time to analyze the success or failure of the movement, and there is still progress being made.

But it's hard to feel optimistic when the government is trying to make you forget the revolution that brought so much hope. Alaa Abd El Fattah, a leader in the 2011 protests, wrote for the Guardian this week:

I try to remember what it was like when tomorrow seemed so full of possibility and my words seemed to have the power to influence (if only slightly) what that tomorrow would look like. I can’t really remember that. Now tomorrow will be exactly like today and yesterday and all the days preceding and all the days following, I have no influence over anything.

El Fattah wrote that from jail, where he is serving five years for protesting.