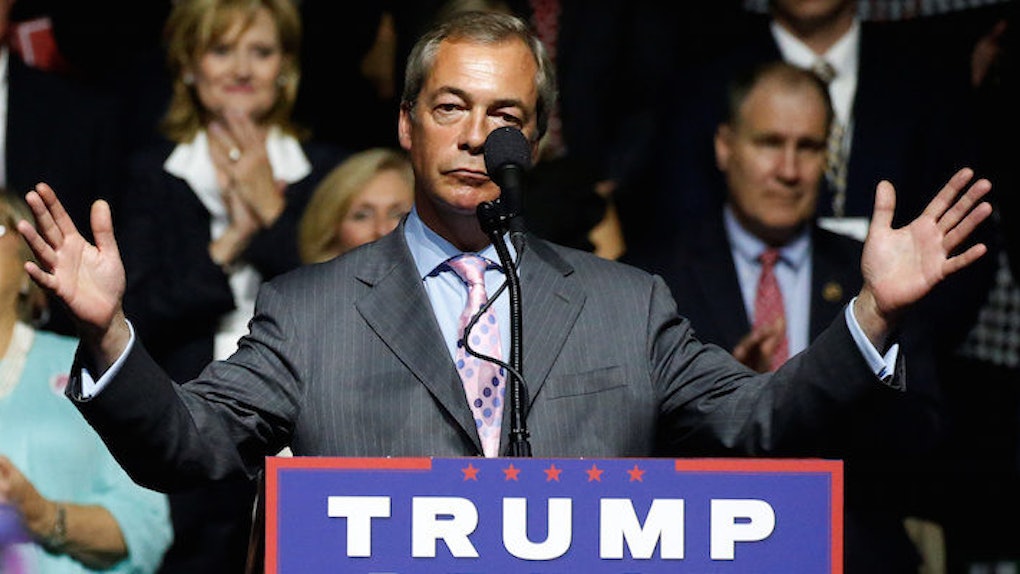 These Are The 'Donald Trumps' Of Europe

Donald Trump's election victory did not occur in a vacuum.

His rise to power is part of a larger movement toward populism and nationalism in Western societies.

Across Europe, far-right parties are gaining more and more power, and racism, xenophobia and neo-Nazism are on the rise.

Trump's victory is part of a global white backlash — "whitelash" — against a rapidly changing and increasingly interconnected world.

He won important states like Wisconsin, Michigan and Pennsylvania due to an overwhelming level of support from white working class voters.

Trump also won with college-educated whites and even white women.

The sentiments and perspectives that drove white voters toward Trump are not an isolated phenomenon. They're occurring across Europe at this very moment as well.

If you want to fully understand what happened in America's election, you have to look beyond its borders.

Here are the leaders and politicians who are essentially the European versions of Donald Trump.

Former Italian Prime Minister Silvio Berlusconi was one of the first politicians who really signified Europe's shift toward the right.

He's an Italian media tycoon, whose political career has been mired be scandals and corruption. Berlusconi has been in and out of power since he rose to prominence in the '90s.

Interestingly, Italy has the most confidence in Trump out of any country in the European Union, according to Pew Research Center.

Like Trump, Berlusconi is known to be quite misogynistic and tries to appeal to people's desire for a strongman. There are a lot of similarities between the two men, which Berlusconi recently acknowledged.

Due to their experiences with Berlusconi, some Italians seem to be looking at what's happening in America with a lack of surprise and a little bemusement.

The United Kingdom recently held a referendum to leave the European Union and ended up voting "yes."

This is widely known as the Brexit referendum.

The sentiments behind Brexit were nearly identical to those that led to Trump's election success: xenophobia, anti-immigration, anti-globalization and fervent nationalism.

While leaders across the world, including President Obama, expressed concern over Brexit, Trump was a very vocal proponent.

So, it's no coincidence Nigel Farage, the face of Brexit and the interim leader of the UK Independence Party, has a very close relationship with Donald Trump.

When Brexit happened, which was a massive shock to many, a lot of people warned it was a sign Donald Trump would win the presidential election.

The same is happening now regarding France's upcoming presidential election and Marine Le Pen, the leader of the Front National party.

This is precisely why Le Pen was quick to congratulate Trump on his victory.

Le Pen's father famously dismissed the Holocaust as a "detail of history," and her party favors the same anti-immigration, nationalistic viewpoints as Trump and those behind Brexit.

Trump is building an international coalition with far-right politicians.

Geert Wilders is the leader of the Party for Freedom in Holland, and one of the most openly Islamophobic politicians in Europe.

Wilders is currently on trial for hate speech in the Netherlands over comments he made about Moroccans (which are quite similar to Trump's comments regarding undocumented immigrants.)

Moroccans make up roughly 2 percent of the Dutch population.

While Wilders feels his right to free speech is being violated, he once compared the Quran to Hitler's "Mein Kampf" and called for it to be banned. He also called for all mosques in Holland to be shut and an end to immigration from Muslim countries.

Like his counterparts in the UK, Wilders wants Holland to leave the European Union.

So, it might come as no surprise the Dutch politician is a huge fan of Donald Trump (who also called for a ban on Muslim immigration), and celebrated his election victory.

Voters in Holland go to the polls next year, and Wilders is definitely enthused by Trump's success.

Trump has many allies in Europe.

Politicians like those listed here are joined by other leaders across Europe, such as the neo-Nazi Ilias Kasidiaris of the Golden Dawn party in Greece's parliament.

Kasidiaris also happens to be very supportive of Trump.

Long story short, Trump definitely has many allies across the globe, and Americans are certainly not alone in dealing with a leader who wins support by fueling people's fears.

If there is any hope in thwarting Trump from implementing his most extreme policy proposals, Americans need to make a greater effort to understand how and why populism and nationalism are taking root in Western societies.