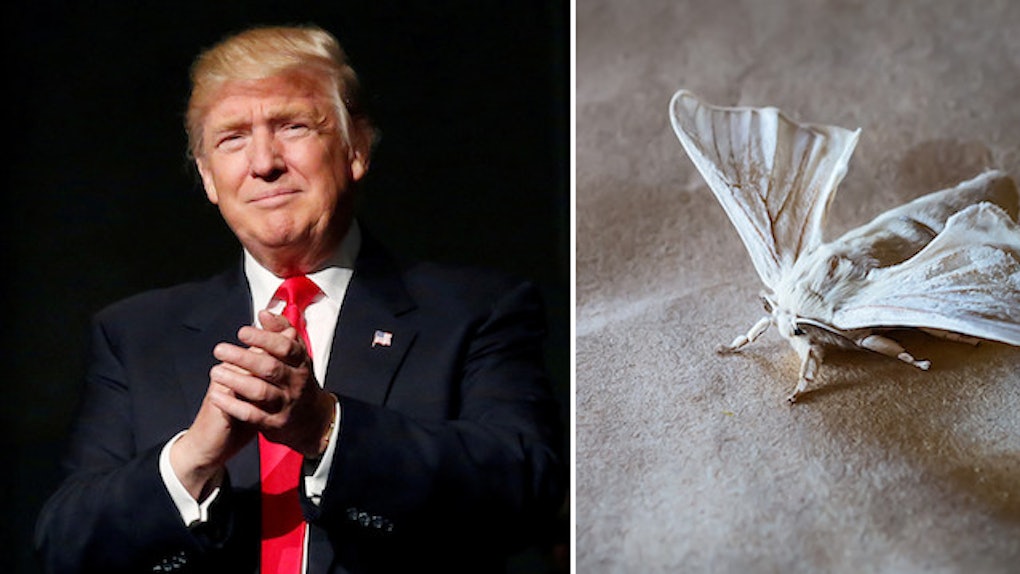 Donald Trump Has A Moth Named After Him

We are now less than 48 hours away from President-elect Donald Trump becoming the 45th president of the United States.

We can only hope the 70-year-old real estate mogul and his trusty cabinet will work diligently toward bettering the lives of the American people.

In return, if Trump actually does "make America great again," we'll likely find brilliant ways to commemorate his presidency. I can see it now...

Envision a gold statue of Trump in the same pose as the Statue of Liberty, except this sculpture sits on the edge of Mar-A-Lago instead of Liberty Island.

By the end of his term, I'd expect us as a nation to have come up with a way to make it permanently rain "gold" over this particular statue.

Unfortunately, we'll have to wait at least four (or eight) years for that to happen.

The good news is President-elect Trump is already remembered in other ways. A new moth species was generously named after the reality TV star for two of the best reasons.

It's all in the hair!

The centimeter-wide moth was discovered by Canadian biologist Vazrick Nazari, according to Mashable.

Aside from possessing Trump's signature hairstyle, the moth is also said to have a tiny penis.

Don't believe me? It's true! The Neopalpa donaldtrumpi's "genitalia" is "comparatively smaller" to other moth species.

So, why exactly was this new moth species even named after Trump in the first place? Apparently, it had nothing to do with its penis size.

An informative research article regarding the species states,

The new species is named in honor of Donald J. Trump, to be installed as the 45th President of the United States on January 20, 2017. The reason for this choice of name is to bring wider public attention to the need to continue protecting fragile habitats in the US that still contain many undescribed species.

Ah! So, in addition to covering the luxury building facades of the Upper West Side, Trump's name is also being used to raise awareness for the protection of our many "fragile habitats" (other than the United States).

Sorry, Trump haters, but this moth's namesake has nothing to do with the president-elect's private parts...

But I'll admit, that is a pretty fucking hilarious coincidence considering Trump has been questioned quite often in that department.