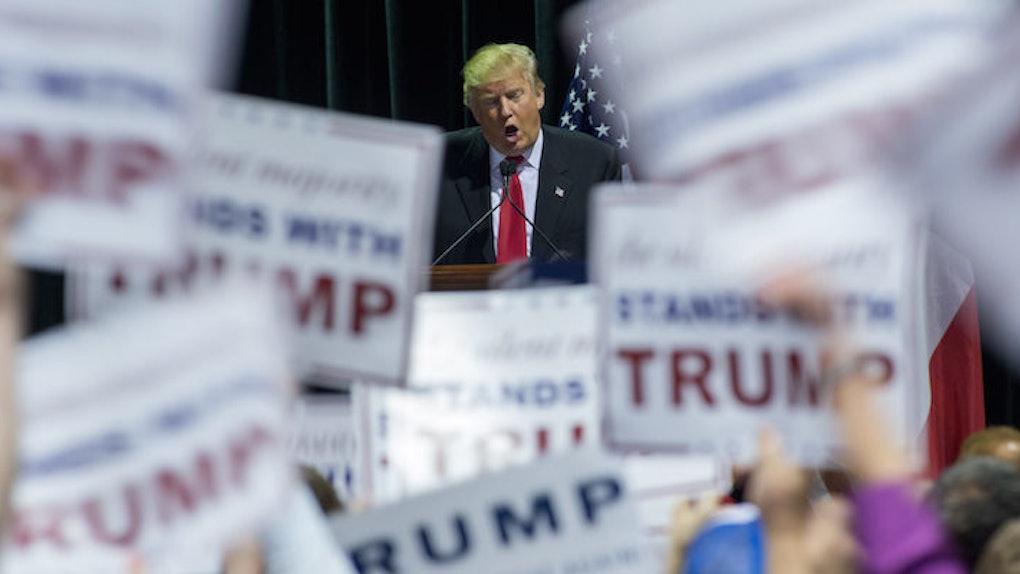 The Science Behind How Donald Trump Became A Master Manipulator

Donald Trump will be the Republican presidential nominee. Well, only if all the media attention paid to his candidacy has anything to do with primary results. A recent analysis found that he has received over 50 percent of media coverage of campaign 2016.

Yet, Trump's position in the polls for the Republican nomination is far lower than the 50 percent mark, in the 20 to 35 percent range. Another factor against him is that his negative ratings are very high in the polls, meaning that many people hold an unfavorable opinion of him. Even the Republican establishment is vehemently set against him.

Of course, there are many who blame the media for its supposedly excessive coverage of Trump, such as media analyst John Sides. But here is the dirty little secret: Trump, as an expert entertainer and performer, knows what viewers want, and he gives it to us.

What do I mean by the emotional part of our brains? Intuitively, we feel our minds to be a cohesive whole, and we perceive ourselves as intentional and rational thinkers.

Yet, cognitive science shows that in reality, the intentional part of our mind is like a little person riding on top of a huge elephant of emotions and intuitions. This is why researchers frequently divide our mental processes into two different systems of dealing with information, the autopilot system and the intentional system, also called "System 1" and "System 2."

The autopilot system corresponds to our emotions and intuitions. This system guides our daily habits, helps us make snap decisions and reacts instantly to dangerous life-and-death situations with a fight-or-flight response. However, while the snap judgments resulting from intuitions and emotions usually feel "true" because they are fast and powerful, they sometimes lead us astray in systematic and predictable ways.

Trump knows how to play to the way our brains are wired through provocative, emotion-inducing statements. As a result, his statements are very well-tuned to trigger our autopilot system and get our attention. For instance, he accused undocumented migrants of bringing drugs and rape to the United States.

These statements were not based on facts, but they were well-designed to appeal to emotions, namely the kind of fears that lead to a fight-or-flight response. In another well-known incident, Trump publicized Lindsey Graham's personal cell phone number. This appealed to our emotional brain's curiosity and surprise.

Coverage of Trump's provocations sell much better than more serious and weighty matters such as policy statements made by other candidates. The phenomenon of us paying excessive attention to emotionally dominant information is called attentional bias, and it is one of the autopilot system's predictable errors.

Here is how it matters for you. Answer quickly: Are you more afraid of an airplane crash or a car crash? Most people are much more afraid of an airplane crash. However, according to research by the National Safety Council, the odds of dying in a motor vehicle accident are one in 98 for a lifetime, and air travel accident one in 7,178 for a lifetime.

However, our emotional system is much more triggered by the tragic airplane disasters we learn about rather than car crashes. We should be much more afraid of driving than air travel, just as we should be much more skeptical of the extent of media coverage providing an accurate estimate of Trump being the Republican presidential nominee. Yet, that is not how our brains are wired.

So, how do we fight against this pull of emotional appeal to know the truth about what actually matters and is most likely to happen, as opposed to falling for attention bias? First, remember that your brain is wired for emotional appeal, resulting in the strong focus on people like Trump and situations like airplane crashes.

Try to notice how information gets to you, and ask yourself whether this information might have resulted from emotional appeal. A good sign is whether you have an emotional response to the situation. Then, try to evaluate the probabilities involved to have the clearest understanding about the reality of the situation and likelihood of future events.

For example, every time you read an article about an airplane crash, you might have a twinge in your gut, which is a sign of an emotional response. You might be tempted to avoid flying for your next trip when you can either fly or drive.

So then, turn to the numbers. For example, for a 400-mile trip for two people, the risk of dying is nearly eight to nine times more likely for a car trip. You will be much less likely to die if you do not follow your emotional brain's pull into attentional bias.

Did you feel a bit of a twinge when you read the last sentence? Yes, it was overly dramatic and specifically meant to illustrate the strength of our emotional system's pull. That sentence illustrates how people like Trump who know how our brains are wired can take advantage of our feelings and thinking patterns for their own purposes.