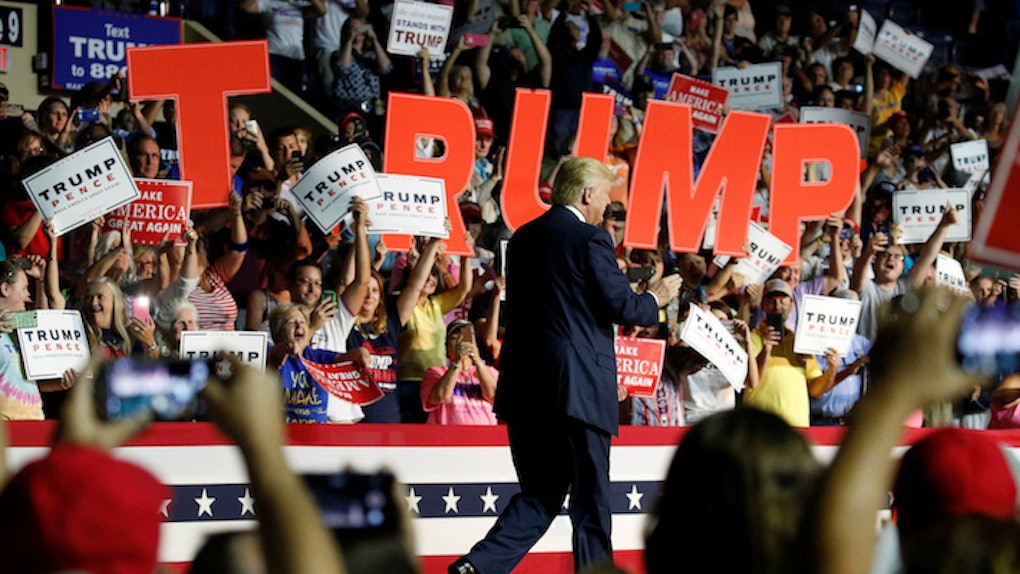 Let me start off  by saying I believe Donald Trump is racist, elitist, sexist and fascist. He threatens the very foundation of this country.

He, like many before him, has exploited a vulnerable group of Americans with a need for their fears to be validated. Donald Trump has provided these Americans with that validation.

We now live in a country where a reality TV star with no filter and zero political experience can convince tens of millions of Americans he's more qualified than a former senator and secretary of state to be president. It's a scary thought.

We've all seen the news and we've all watched the videos of police shootings and riots. We know how fractured we are as a nation right now.

Democrats label Republicans as racist rednecks who want nothing more than to take our country back to the days when women and minorities had no real place in society. In return, Republicans smear Democrats as socialists who just want to give everything away for free and live in a country of sin.

The result of this discord, according to new research, is 47 percent of Clinton supporters and 31 percent of Trump supporters say they have no close friends who support the opposing candidate.

This type of political divide is unhealthy for the country. Some Donald Trump supporters actually share his viewpoint, yes. They're racist and divisive and represent the worst part of the this nation's history. Many Trump supporters, however, are frustrated, scared and clinging to his tough guy bravado.

Democrats have to avoid falling into the trap of dismissing all Trump supporters as crazies for a myriad of reasons.

They're not going anywhere.

Trump supporters aren't going anywhere anytime soon. I know Democrats countrywide expect that on November 9, Trump supporters will go up in a puff a smoke, like a vanquished villain from an '80s horror movie.

Yeah, that's not going to happen. Trump threw gasoline on a fire that was already burning. Trump didn't create a new movement. People like Newt Gingrich, Roger Ailes and Rudi Giuliani have spent their entire careers stoking the fears of Republicans. Trump has just managed to do it better.

Whenever Trump supporters are interviewed on television, they say the same thing when asked what's important to them. They say they want their jobs to come back from China, they want the border secured and they want to stop paying so much for government programs.

I know this is going to be an insanely controversial thing to say out loud in Democrat circles, but Trump supporters actually have some legitimate concerns. It's not the concerns that are the problem, though -- it's the tone and manner in which those concerns are being expressed.

By writing off all Trump supporters as crazy people, it fails to consider any substance their argument might have. We miss out an opportunity to be self-reflective.

Trump supporters  were Santorum supporters in 2012 and Huckabee supporters in 2008 -- they will find some other demagogue to latch onto in 2020. We can choose to dismiss them or engage them, but they're not going anywhere.

We have real problems to solve.

Surprise surprise, this country has real problems to solve right now. We've come a long way since good old George W. almost sent us careening off of a financial cliff, but we've still got a long way to go.

Manufacturing jobs have gone overseas because of costs and they'll probably never come back. How do we create jobs to fill that void? The Middle East is imploding after years of foreign interference and arbitrarily drawn geographic boundaries, so how do we fix it? Protests and rioting are taking place across this country as a result of the repeated shootings of African Americans. What do we do about it?

Our problems will only get harder to solve the longer we ignore them. We can certainly continue to get angry when we hear people like Sean Hannity repeatedly dismiss the members of “Black Lives Matter”as thugs and criminals and we can certainly feel pain when we see pundits and politicians use phrases like “welfare queen” and “ food stamp president” to describe the first African American president in our nation's history. Still, we have to rise above it all.

When I look at Trump supporters, I see are a group of people wrestling with the harsh realization that the America they grew up in, a country that looked like them and sounded like them, is no longer the same America. Think about that for a minute.

While one portion of the country is celebrating the evolution of our inclusiveness, another portion is waking up to a country very different from the one they were born in. They're scared and confused. That's what all of this “Give us our country back!” crap is about: fear.

It's about a group of people feeling like they have no place in society. It's about how they feel like their voice isn't being heard -- something they actually strangely have in common with the Black Lives Matter movement.

I want to be clear: I'm not making excuses for anyone -- only attempting to understand everyone. We've got real problems to figure out, and the only way we begin to solve them is by avoiding the trap of intellectual laziness.

Hard questions need to be asked. Why do they think the way they do? Why are they so upset? Why are we having the problems we're having?

We have to start asking the tough questions that require self-reflection. It's not comfortable for anyone, but neither is a colonoscopy -- yet both are life saving.

No single politician can solve problems that have been created over hundreds of years, and no one should be asking them to. If we want protect our democracy and build a country worthy of our children, we must ask ourselves: What caused the desperation that led Trump supporters to see him as viable choice?

How has this country failed a group of people so extensively that they lack the ability to empathize with anyone other than their tribe? Answering these questions won't be easy, but the alternative is unfathomable.

We have to think about what example we want to set for the next generation.

Listen, we're not that different. We may disagree on what change should look like, but we can all agree that any change is scary -- especially when you didn't want the change in the first place.

Tribalism has infected our democracy and it's up to us to overcome it.  Northerners and southerners can no longer keep slamming the “Americanness” of their fellow patriots. One walk through Arlington Cemetery clearly shows us Americans comes from every state, religion and race.

We owe it not only to the brave men and women who have sacrificed to make this nation so great, but to the generations of children who deserve to be raised in a country worthy of their potential. We owe it to each other. It shouldn't take tragedy for us to set aside our differences and see each other as friend, not foe.

History is once again watching to see how we react. We can be distracted by Trump and his exploitation of a vulnerable group of people or we can heed the examples set by giants like Fredrick Douglas, Abraham Lincoln and Martin Luther King.

One side has to take the first step and we can't wait for Republicans to do it. It's not going to be popular or easy, but we have to rise to the occasion. It's what we do. We're simply at a turning point, not a breaking point. Our issues can be overcome.

Like generations before us, we'll find a way to strengthen our union and heal a fractured nation.