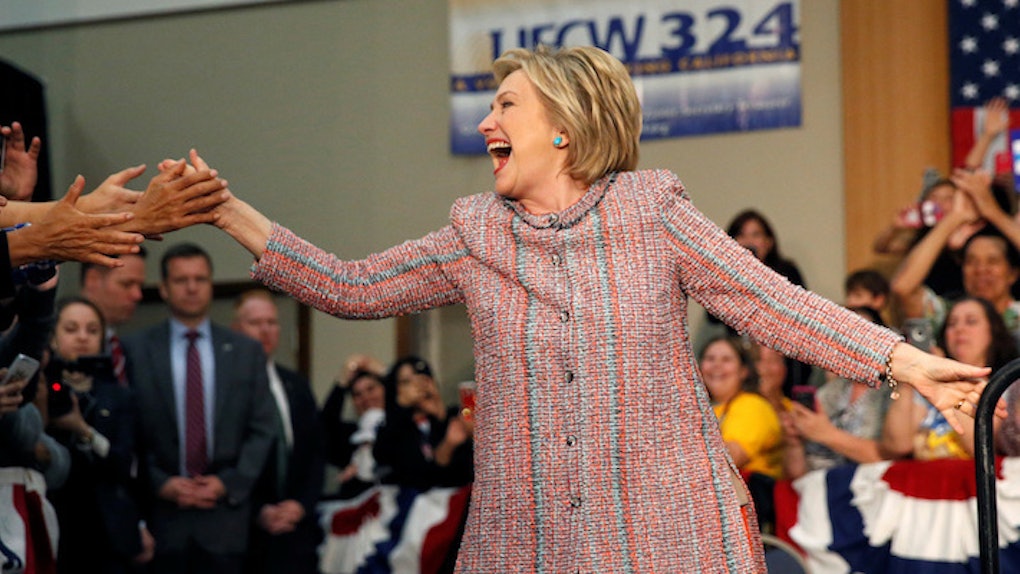 Why I Begrudgingly Decided To Vote For Hillary Clinton

Roughly two weeks ago, I had an epiphany while driving. I realized that I'm going to vote for Hillary Clinton. As someone who was raised to follow God first and then the elephant, this was a pretty unnerving conclusion.

But, for the first time since I learned that Hillary was running for president, I am (begrudgingly) acknowledging that this race isn't (entirely) about politics. At least not for women.

This is a hard truth to face. I was raised with the idea I could do, and be, anything that my brothers could do, and be. Except for the one time when my mother took me off the all male t-ball team (a mistake she has since yearly apologized for), I never questioned that my parents believed I was smart, capable and equal to a man.

I've held onto this belief for the last 32 years of my life, and naively thought it was common.

I can truthfully say that I've lived in a rose-colored bubble of ignorance when it comes to the misogyny, and inequality, that still exists in today's society.

The truth is, I wanted it to be an overreaction by women. I wanted it to be that, we were so used to fighting, we kept doing it long after necessary. I continuously found myself fighting with my feminist sister about the fact that I care about being respected, and valued, as a person, not as a woman.

I would bite my tongue around my friends when talking about reproductive rights, and I would judge the girl that got screwed over by some jerk, assuming that she ignored all of his blatant statements about not wanting a relationship.

Perhaps I teetered on the edge of misogyny in my own way because I thought being “one of the boys” was the key to being a strong, powerful woman. I've always been closer to guys; I'm drawn to their sarcasm, and the ease with which a fight between “bros” seems to dissipate.

I was convinced that women couldn't handle my jokes, outgoing personality and dislike of talking about my feelings. Somehow, in elevating myself above the stigmas of womanhood, I was perpetuating the stereotypes that I sought to avoid.

Two weeks ago, I started to reflect on the past year of my life. Much of it I've documented in my writing, so I forced myself to go back and read between the lines. During this self-imposed reflection, I realized that I had been screaming for a year about sexism, but calling it by so many different names that it was hidden, even to me.

I've written about my internal turmoil, and the external judgement over whether I should be in a relationship versus focusing on a career. I've told stories of losing myself, and my independence, in controlling relationships and my own fears of being inadequate. I've vented about men knowing no boundaries.

Beyond my writing, I've watched as female victims have been blamed for rape and abuse, witnessed men sexually harass my friends and heard professional women complain of wage discrepancies.

The reality is that I can ignore it and you can ignore it, but the problem isn't going away. It's time to face it.

This article isn't an attack on the sexist men of our country, and it's not a call to action for women. This is a plea to the good men out there -- my father and brothers, your boyfriends and friends. The ones that believe in us.

We all know if you have any sense that you're not voting for Trump, so I'm asking you to step up on my behalf and on behalf of your wives and mothers. Give a woman a chance to be president, even if you don't agree with her.

Open the door, so that four years from now, we won't even have to have this conversation.