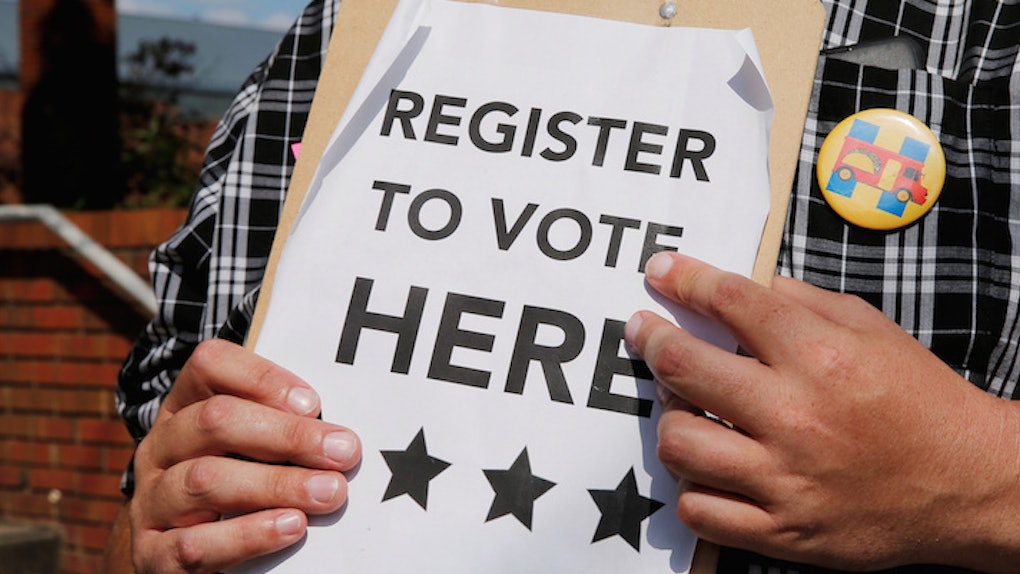 These Dancers Are Fixing America's Low Voter Turnout, One Step At A time

Joan Lipkin was at the gym when an idea hit her: What if she got members of the arts community together to create short dance pieces about the history of voting rights?

And what if they performed those pieces in public spaces?

And what if they provided voter registration for the people watching the performances?

Of her moment of inspiration, Lipkin told Elite Daily,

I don't know if it was that I was at the gym and all the pheromones were firing and I was sweating...

With a little help from her friends, Lipkin – the artistic director of That Uppity Theater Company in St. Louis, Missouri – created her own movement with "Dance the Vote."

The concept is simple: Dance troupes choreograph performances that narrate the stories of the various fights for voting rights.

Get a sound system and set it up in a public place. Dance.

People will notice. Then, get them to register to vote.

Lipkin hopes young people around the country will steal this model and use it as their own form of grassroots voter registration encouragement. Literally.

Joan says you are welcome to borrow this idea and if you do, let us know how it goes.

While she's had help from various dance companies – including Ashleyliane Dance Company; Karlovsky and Company Dance; Beyond Measure Dance Theater and the AfroKuumba Dancers and the Washington University Dance Theater – she insists you don't need all that much to get involved.

It could be particularly useful, she thinks, on college campuses.

If you're in a public space like the cafeteria or the commons, then the publicness of it draws people, and the art draws people -- and then you do voter registration.

Lipkin was motivated by the staggering number of eligible voters who do not vote. Voter turnout in the United States is one of the lowest turnouts in the developed world, according to Pew. Our voter turnout for the 2012 presidential election was just 53.6 percent.

I find these statistics mind-boggling, given the history of struggles we've sacrificed in this country -- especially for African Americans, women and people with disabilities -- to gain access to this essential right.

That's why she wanted the Dance the Vote performances to showcase the history of voting rights. She wanted to show viewers just how much our ancestors struggled to ensure we'd have a voice in our government.

But insisting on that message -- that voting rights were hard-fought -- isn't exactly persuasive. Thus, the music and dancing.

Lipkin wrote about her creation, saying,

In this season of stressful political dialogue, it is empowering to be reminded of how beautiful and necessary voting is, and how much of a community the very act of voting, and making work about voting, can create.

Voter registration deadlines are coming up quickly around the country. Make sure you're registered for the election on November 8.