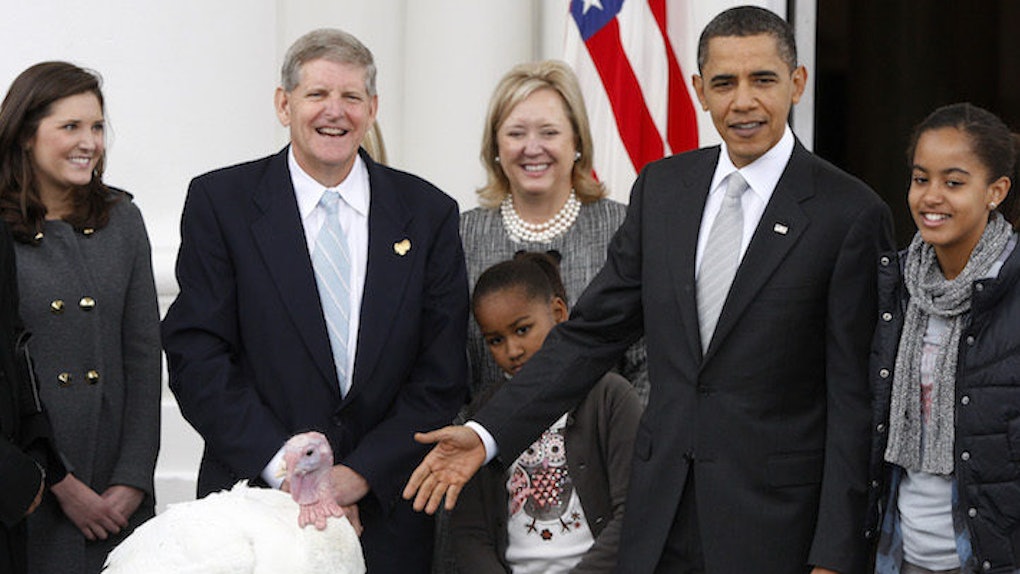 The Turkey President Obama Pardoned In 2009 Has Died

I regret to inform you the turkey named Courage – who was pardoned by President Obama in 2009 – has died.

This is a sad day for America, especially during a year that appears determined to kill everyone.

Every single year, the president pardons a turkey on Thanksgiving. Courage was the first turkey President Obama pardoned.

There's no doubt this turkey held a special place in Obama's heart.

It's probably safe to say the president is inconsolable right now. We need to stand by him during this trying time.

But we also need to eat turkey... as much as we possibly can. It's our duty as Americans.

We will honor Courage's life by stuffing our faces with turkey – slathered in gravy and mixed with mashed potatoes – and falling into a deep, tryptophan-induced food coma.

We will also watch football. Don't forget about the football.

This is what Courage would want.

We need to respect turkeys, especially on Thanksgiving.

As President Obama once stated,

The president clearly admires turkeys as much as Benjamin Franklin did (as one should, as they're awesome AND delicious).

You might've heard Franklin wanted the turkey to be the national bird, instead of the eagle.

This is actually a myth. But he DID once argue in a letter that turkeys are better than eagles. He described them as courageous (like our dearly departed friend):

The turkey is... a much more respectable bird, and withal a true original native of America… He is besides, though a little vain and silly, a bird of courage, and would not hesitate to attack a grenadier of the British Guards who should presume to invade his farm yard with a red coat on.

On Wednesday, President Obama will reportedly pardon one of two birds named Tater and Tot.

Sadly, much like other important political issues, we're being forced to take sides on this matter.

I dream of a world where we can be #TeamTaterTot. Bring the taters and tots together.

May your lives be as rich and full as Courage's, and also full of tater tots.