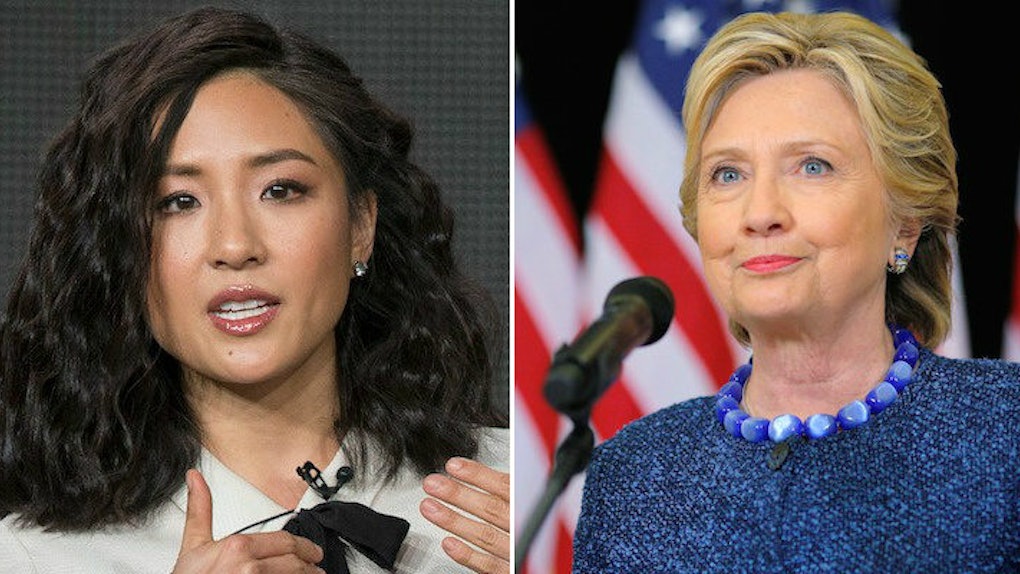 When I was a 12-year-old middle-schooler in Richmond, VA, my local newspaper published an op-ed that I wrote all by myself.

Also when I was 12, I sneaked a sip of my mom's beer and thought it was the most disgusting thing ever.

How are these two things related? They're both real life examples of how I have changed over time. I love beer now.

My op-ed back then was fervently pro-life.

In my youthful brio, I thought it was deliciously righteous.

Now I know it was grossly tyrannical. Nothing better than a hotshot 12-year-old with no real-life experience telling you her way is the ONLY way! She alone can fix it! (Sound familiar?)

I passionately support Hillary Clinton for president because she has devoted her life to public service and has been willing to learn and change along the way by listening to the people she serves.

Some attack her for her listening skills, discrediting it all as a mere ploy... they claim she listens to African Americans, Latino Americans and Asian Americans merely to earn their votes.

That's probably right…. I do think she's trying to earn the votes of people from all communities -- because they matter too.

What's wrong with spending time with populations who have been underserved and unheard and have even had their voting rights suppressed?

In my time on the campaign trail I've witnessed a lot of Asian-American voter apathy that results from a direct feeling of not being heard.

Listening to an underserved population is how you begin to understand them and serve them better. It's how you empower them to take ownership of their votes.

Public service is about serving all the people, including the ones who are not like you.

Some sneer at it as zealous ambition, as if that very label discredits her motives.

And some may reprimand her for changing her positions over time.

Progressives believe in change. That's what progress is. Listening to others and letting their experiences inform your own. That's a good thing.

Remember my 12-year-old op-ed? And beer?

Today, I'm 100% pro-choice. But my stance didn't change because I'd ever been faced with that difficult choice. I haven't.

No, rather, it changed because I've realized it wasn't my choice to make for others. As I grew up and saw more of the country, I met women who were not like me.

Through knowing other women, I learned there wasn't only one way to be a woman. Why had I been so cocksure that my way was the only way?

I think a part of that 12-year-old me feared that allowing another woman her differing beliefs would threaten my own: Who was I if everyone wasn't on board with me?

That's why one of the most striking moments in this election was when someone asked Hillary how she felt about millennial women who were not with her.

She responded, quite simply, with,

They may not be for me, but I am for them.

What goddamn grace. What utter lack of ego. What clarity of vision and purpose and empathy.

Whereas Donald Trump wants to exact revenge on people for just, like, being mean to him?!

That's a man whose ego is so unsound that it cannot make space for anyone in disagreement.

Yet Hillary says to millennial women: Even if you are not for me, I am for you.

Well, I am a millennial woman and I am FOR Hillary.

Because it usually takes being a woman to understand where that initial millennial disagreement comes from.

There's a scarcity complex that women inherit when we endeavor to create space for ourselves in institutions that have been structured around masculine values.

Any attempt to examine that discomfort has usually been shut down with a demand for gratitude and a micro-aggressive discrediting of my feelings. (As if men also have a better understanding of our feelings than we do!)

So to keep up, we learn to play the game, often at the expense of our own repression and discomfort.

There's a bitterness that metastasizes from that repression. And that bitterness can sometimes feel like an Absolute Truth, rather than a mere unconscious projection of frustration with a system that hasn't valued us.

It comes out as, “Ugh, I just don't like her… voice. She sounds so insincere. I want a woman, just not that woman.”

Well, luckily for us, Hillary cares more about changing the cultures that incubate these uncomfortable/unsafe conditions for women than she does about you personally liking her.

She is for you, even if you are not for her.

Because regardless of how one views her, Hillary Clinton has, on record, been FOR women for all 30 years of her life in politics.

That's a commitment to public service that you just can't fake.

Listen, I've only been a full-time professional actor for about three years. And during that time, I've engaged in a passionate and difficult advocacy for Asian-Americans.

The scrutiny I've experienced has often been fatiguing to the point of despair.

I've felt like quitting because it's hard and unfair. But I don't.

Because the things that make it hard are the very reasons it's important.

The scrutiny I've experienced doesn't even rival the smear campaign Hillary has had to trudge through. But trudge through it, she does.

You can't fake that fortitude. That's how I know her commitment is real. Even Donald Trump himself had to admit: “Hillary doesn't quit, doesn't give up.”

She will never give up on you, even when you feel like giving up on yourself. She's a fighter.

Who is she fighting for? Besides women, children, families, people of color, LGBTQ, people of all faiths, people with disabilities, bankers and middle class and struggling folks alike… she is fighting for you.

#WhyImWithHer is a project of EMILY's List, the nation's largest organization dedicated to changing the face of power by electing pro-choice Democratic women to office at all levels.