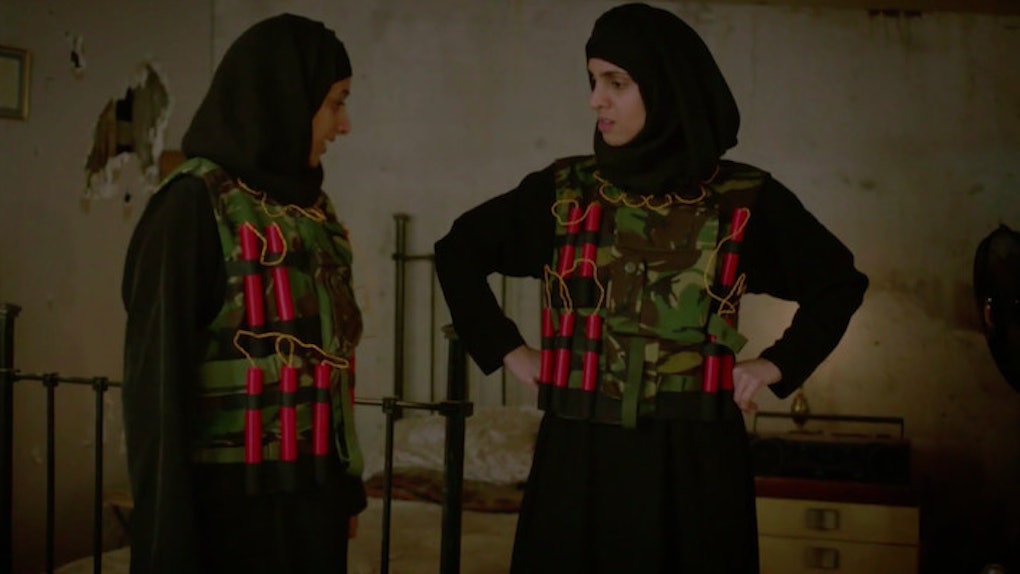 BBC Two comedy show "Revolting" aired a new sketch on Tuesday that many say makes the show live up to its name.

The sketch is called "The Real Housewives Of ISIS." It's a parody of the "Real Housewives" series, but about, well, the women of ISIS, which has been spreading terror in Syria and Iraq.

The parody refers to what we generally know about the lives of women who join ISIS as wives.

It's set to look like the preview for an upcoming "Real Housewives" episode.

It starts with one woman saying,

It's only three days until the beheading, and I've got no idea what I'm going to wear!

The next woman explains,

Abdul seduced me online. He had me at 'free healthcare.'

Then one woman says this is her sixth marriage, having been widowed five times. An explosion occurs, and she shrugs, "...six times."

Between b-roll shots of destroyed houses, we see some of the darker sides of ISIS wifehood parodied. One woman is forced to scrub a floor and another celebrates that her husband now has her on an eight-foot chain -- which almost allows her to step outside.

Classic "Real Housewives" situations are given an ISIS twist, like the wives checking out one woman's outfit -- a suicide bomber vest -- only to make fun of her in private for looking "massive."

And of course that moment is only upped by another woman showing up wearing the same suicide jacket.

The reactions to this sketch have, predictably, been an insane mix.

Some people are wildly offended by the sketch for a handful of reasons.

First of all, people worry this just further discriminates against Islam and heightens the stigma against Muslim women who wear hijabs and niqabs.

This argument is a little hindered by the fact that many Islamic people believe ISIS to be a grotesque bastardization of the religion, especially as many Muslims are killed by the group.

Then there's the argument that it's mocking real women, many of whom are being horrifically abused and raped on a regular basis, having been tricked into joining.

But other people praised the BBC for showing this parody, believing it's fair to mock the violent group.

The argument there is that satire is a form of commentary, and mockery helps delegitimize ISIS.

This argument is helped by the point that the women in the parody are seemingly women who chose to join ISIS, rather than women who are kidnapped and forced to marry ISIS members.

Sunny Hundal wrote for the Independent,

Shared humour can do a better job of breaking down barriers than a thousand articles. So, lighten up! Isis deserves all the ridicule it gets.

What do you think about it?

Citations: Some People Are Pissed About A Sketch Called "The Real Housewives Of ISIS" (BuzzFeed), The secret world of Isis brides: 'U dnt hav 2 pay 4 ANYTHING if u r wife of a martyr' (The Guardian), Outrage over The Real Housewives of Isis is ridiculous – it's our duty to poke fun at people who join terrorist groups (Independent)