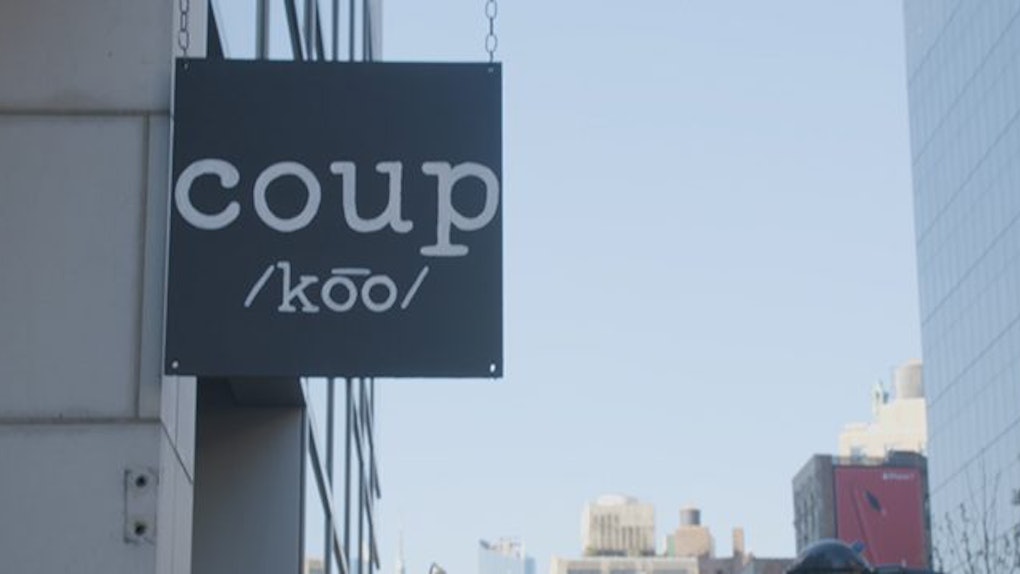 When something awful happens, your first instinct is probably to wallow, preferably with a strong drink. It's only after you indulge in your misery that you pick yourself up and start fighting. But what if you could drink away your sorrows and combat them at the same time?

This is the idea that came to Ravi DeRossi, the owner of some of the most well-known bars in New York City, after the election. Like many New Yorkers, he was left feeling grief-stricken and powerless by Trump's victory.

But the loss led to him dreaming up the idea for his latest establishment: an anti-Trump bar where 100 percent of the proceeds go to organizations either being defunded by Trump's presidency, like the EPA or Planned Parenthood, or those fighting against his policies, like the ACLU.

The bar is named Coup -- which perfectly fits the resistance-theme. According to Ravi, the idea is to create a community and "turn our angst and despair about our current administration into something more positive."

Ravi, whose other bars include Death & Co. and Amor y Amargo, says he wasn't involved with politics at all before Trump's win.

People feel so much anger, despair -- and even happiness -- about what's going on. People all the sudden are addicted to reading the news and wanting to be more involved. But for me, it's never been anything I've really considered before. I feel like everyone should have a fair chance at life, liberty and the pursuit of happiness, and that's what this country is based on. I feel like the current administration is doing its best to actually work in the opposite direction.

Ravi realized he wanted to take action, and while drinking and venting with his friends and business partners Max Green and Sother Teague this winter, it struck them.

"This is what I know how to do, I open bars," explained Ravi. "Everyone wants to do something, and they can find something in their profession or hobbies. For me, this is what I know: drinking and complaining."

The bar, which opened April 14 and will stay open until Trump's out of the White House, is located at 64 Cooper Square, right by Astor Place in New York City. It's a smaller, intimate space, done up in shades of brown and blue.

Resistance-themed posters decorate the wall, with messages taken from popular protest signs seen recently, like, "The power of the people is stronger than the people in power," "No, you cannot take my rights, I'm still using them" and "The pilgrims were undocumented."

The way the bar works is simple: After you pay for your drink, you're given a small wooden token. Several jars will be in the bar, marked with several different organization names. You drop the token in the jar of whatever place you want to receive some money. This way, you can ensure your cash goes to the organization of your choice.

A few times a week, there will be guest and celebrity bartenders at a special section of the bar. These bartenders will be an eclectic bunch, encouraged to serve more unique and varied cocktails, but the standard bar will serve a menu of crowd-pleasing drinks.

Despite how polarized the country is right now, Ravi isn't worried about blowback. In fact, he says he's received nothing but positive feedback from people about the bar, getting hundreds of emails a day from people who want to be involved.

He notes Trump supporters are welcome, as long as they aren't looking to cause trouble and are OK with their funds going to organizations fighting the administration they support. He wants the bar to be inclusive, a space where anyone is truly welcome -- which is something we definitely need more of in 2017.