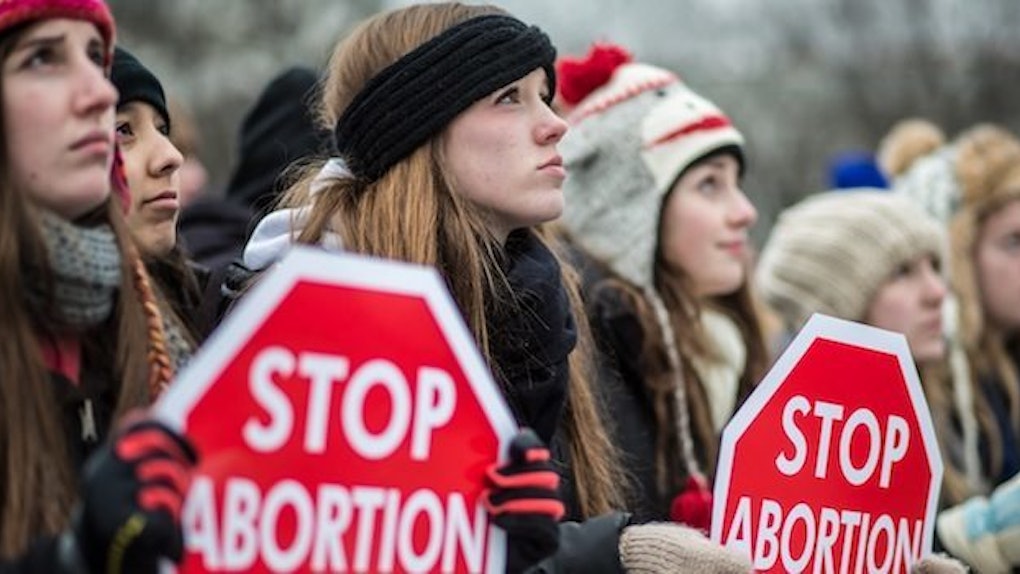 Why The Anti-Abortion Movement Is Out Of Touch With Reality

In Texas, the anti-choicers are trying to shut down a court system that desperate teenagers can use to get an abortion without their parents' consent.

In Mississippi, they're working tirelessly to shut down the last remaining clinic that performs abortions, with the explicit reason being that they don't want abortions to be legal in the state.

In Louisiana, they're introducing a "personhood" bill, even though similar bills have failed in every state where they've come up.

And in North Carolina, they're trying to force the top-rated UNC OB/GYN program to stop teaching the procedure.

They really don't give up, you have to give them that. But really, anti-choicers... This is just getting ridiculous.

The proposed change in Texas offers literally no sensible reasoning as to why this would help the girls it affects.

Elizabeth Graham, the director of the Texas Right to Life organization claimed that the judicial bypass law, which allows girls to plead their case in front of a judge if they can't get parental consent, allows “the abortion industry to shepherd girls through.”

The abortion industry? That's a new one.

This is what judicial bypass already requires; the teen must prove she is mature enough to choose an abortion and that telling her parents would put her in some kind of danger.

Does this sound like something a teenage girl would do for fun? Does eliminating this option sound like it would help anyone?

In Mississippi, they haven't even bothered making excuses for all the laws they've been passing, which recently came into the spotlight in late March when the last remaining clinic was vandalized.

Upon the introduction of a law requiring doctors performing abortions to have admitting privileges at hospitals, both the governor and the lieutenant governor expressed their wish to “end all abortions in Mississippi.”

These admitting privileges laws usually come with the excuse that it's for the safety of the women involved. If that were legitimate, though, you'd expect groups like the American Medical Association or the American College of Obstetricians and Gynecologists to support them – which, unsurprisingly, they do not.

In Mississippi, though, they're not even pretending. For once, we can actually take some politicians at their word.

In Louisiana, they're the latest state trying to mount an effort to pass a "personhood" bill, which has failed in every other state where it's been put forward. And let's be clear about that – it's not the courts that are stopping it, it's the voters.

Initiatives put to voters in Colorado, North Dakota and even Mississippi all failed decisively.

You have to admit that these "personhood" bills, which define life as beginning at conception, are bold, even in a world where it's now almost normal for conservative legislators to throw up all sorts of unnecessary and burdensome obstacles for women in a tough spot who are trying to exercise the right of control over their own bodies.

They sound nice for those lawmakers up front, but what about when you get into the unintended consequences? Forms of birth control that don't necessarily prevent conception would be criminalized (bye bye, IUDs).

And, not to mention, the death penalty would be caput. Which, surely, is something that those same conservative legislators would love.

Simply put, the irony of "personhood" bills is that they're inspired by a philosophy that "all life is precious." Yet, the same people who support them typically condone the death penalty as well. This is inherently hypocritical.

Clearly, Louisiana has taken a close look at the situation and decided that this is the best solution for everyone involved, especially their constituents. Given similar bills' track records, though, it's all but guaranteed not to pass.

Louisiana is really just using an old strategy, though. North Carolina is the one breaking new ground in the fight to deny women the right to choose.

The state can boast one of the best public university systems in the country, much of which has recently come under attack by the Republican-controlled legislature. This latest step goes beyond just funding cuts, however.

Now, they'd like to take the OB/GYN residency program at UNC Chapel Hill, the state's flagship public school with the top rated residency program of its kind in the South, and forbid the doctors there to perform abortions or supervise residents while they do them.

This would even threaten the program's accreditation, which would in turn force ambitious medical students to go elsewhere to learn the trade.

Abortion rights have already started disappearing in North Carolina since Governor Pat McCrory was elected, despite his campaign promise that he wouldn't allow that to happen. This latest idea would have more far-reaching effects, however.

Anti-choice activists have already succeeded in creating a shortage of abortion providers, at least in part through their constant harassment of doctors.

This means that in the coming decades, women in need will already have to work harder in order to find someone who will help them. And if one of the top OB/GYN residency programs in an entire region won't teach doctors to do a necessary procedure, who will?

The need for abortions won't disappear just because they're not allowed – which is exactly the idea that anti-abortion activists don't seem to comprehend. Instead, they're grasping at all these ridiculous straws without even trying to say their laws will make women safer.

Want to reduce abortions and make everyone safer at the same time? Provide comprehensive education about birth control. But no, that would be far too extreme.

Teenagers will have sex and get pregnant regardless of whether or not abortions are legal.

Making them illegal increases the likelihood of unsafe abortions, and ignoring the need for further education raises the probability they'll get pregnant in the first place.