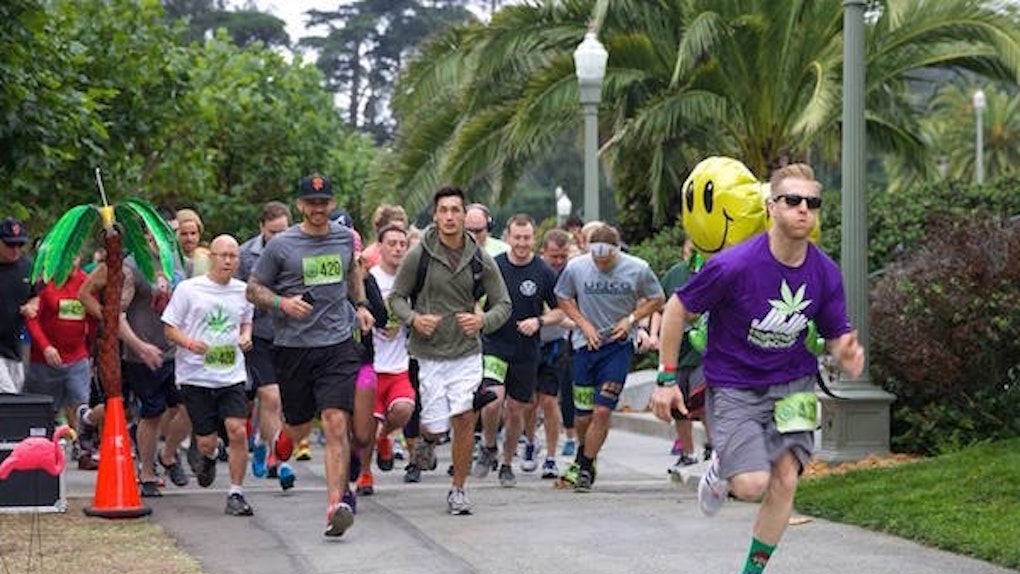 The 420 Games, established by Jim McAlpine, founder of the ski/snowboard lifestyle brand SnowBomb.com, is a series of events aiming to destigmatize responsible cannabis use.

Elite Daily recently attended one of these events in San Jose, California, meeting with McAlpine and other activists to discuss the movement.

We're coming off decades of negative propaganda stigmatizing cannabis use. We've all been lied to. It's a bad rap and we need to change the dialogue. There are millions of people who use marijuana in effective, healthy and productive ways We plan to show this to the world via athletic achievement.

The 420 events include everything from organized runs (often 4.20 miles) to mountain bike races and golf tournaments. Participants are responsible pot users who aim to prove they still live healthy and active lifestyles.

All of this coincides with the movement for marijuana legalization, which is rapidly gaining momentum across the United States.

According to polling from Pew Research Center, a majority of Americans, particularly Millennials, are now ready for pot to be legal across the country.

But even as the US becomes more accepting of marijuana use, certain myths about the drug persist. In particular, it's evident many still stereotype pot users as lazy stoners or burnouts.

In truth, almost anyone you see walking down the street could be a frequent or casual pot user; they don't all resemble Cheech & Chong.

From long-haired hippies donning Bob Marley t-shirts to suburban parents and former UFC fighters, those who partake in the use of cannabis come in all shapes and sizes.

Pot hasn't ruined their lives, and they don't spend the entire day eating Doritos on their couches.

There are a number of responsible, mature and productive marijuana smokers across this country -- and the world, for that matter. Not to mention, many use it for legitimate medicinal purposes.

As the US Surgeon General Vivek Murthy recently stated:

For certain medical conditions and symptoms... marijuana can be helpful.

Other prominent individuals in the medical community strongly concur, such as Dr. Sanjay Gupta, who recently wrote (on 4/20 of all days):

With that said, as with any substance, excessive use of pot can have negative consequences, and moderation should be the golden rule. The 420 Games promotes and educates people on this mentality, while also working to deter minors from using cannabis.

Nationwide marijuana legalization would not transform America into a country of apathetic burnouts, and the 420 Games, among other movements, helps prove that.