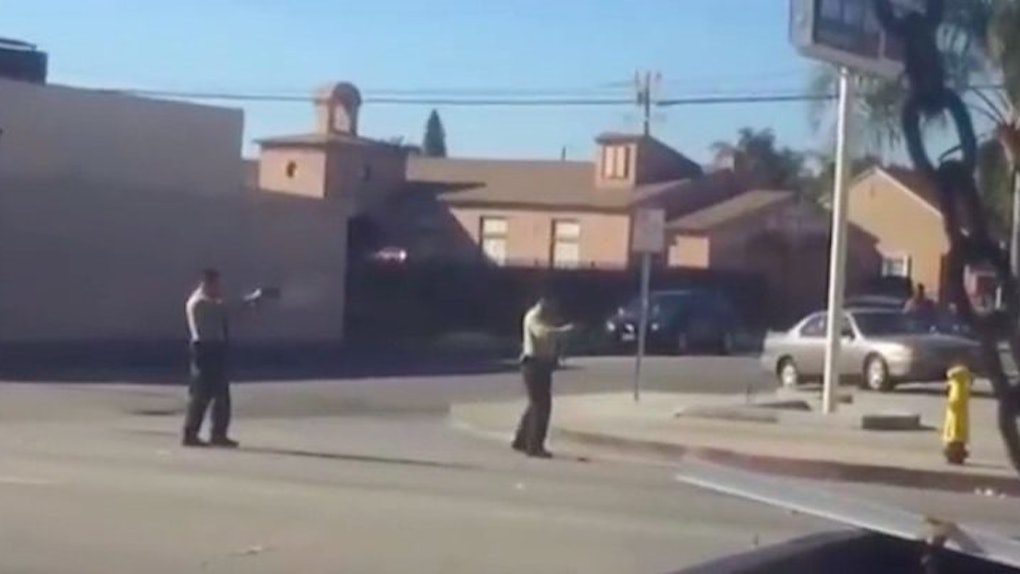 A graphic cell phone video taken at the scene shows the officer shoot the suspect in the back and continue shooting as he attempts to crawl away.

The man, who has been identified as a 28-year-old African-American father of three, was pronounced dead at 11 am. A .45 caliber gun, allegedly belonging to the deceased, was recovered from the scene.

According to witnesses, deputies responded to the scene Saturday morning after receiving multiple calls alerting them to an armed suspect. Gunfire was also reported.

Officers say the man was repeatedly asked to lower his weapon, but failed to comply and pointed the gun at the officers. One deputy fired, shooting the man, while another soon arrived to provide backup. It is unclear if the second deputy also fired, but multiple gunshots can be heard in the video.

After news of the shooting broke, protesters gathered at the Lynwood gas station where the suspect was killed.

I want to assure the public that the Sheriff's Department takes deputy involved shootings very seriously and that this investigation will be handled with the utmost professionalism and integrity. We are working closely with our criminal justice system partners as well as members of the public to put together the most comprehensive and accurate account of exactly what occurred. In this modern age of cell phone video and instant analysis on the internet, I would ask that we keep in mind that a thorough and comprehensive investigation is detailed and time intensive. It will involve not just one source of information, but numerous sources, potentially including multiple videos, physical evidence, and eyewitness accounts. I urge anyone who has information about this shooting incident to contact our investigators. Our number one priority is public safety.

You can see the footage of the fatal shooting below (warning: Graphic).

BREAKING: A witness's graphic video appears to show Los Angeles County Sheriff's Department deputies fatally shooting a man near a gas station in Lynwood.It was unclear what led to the incident, in which more than two dozen shots seemed to be fired. No deputies were injured.In accordance with protocol, a multi-agency investigation was underway.Read KTLA's story here: http://on.ktla.com/tqKrl Posted by KTLA 5 News on Saturday, December 12, 2015