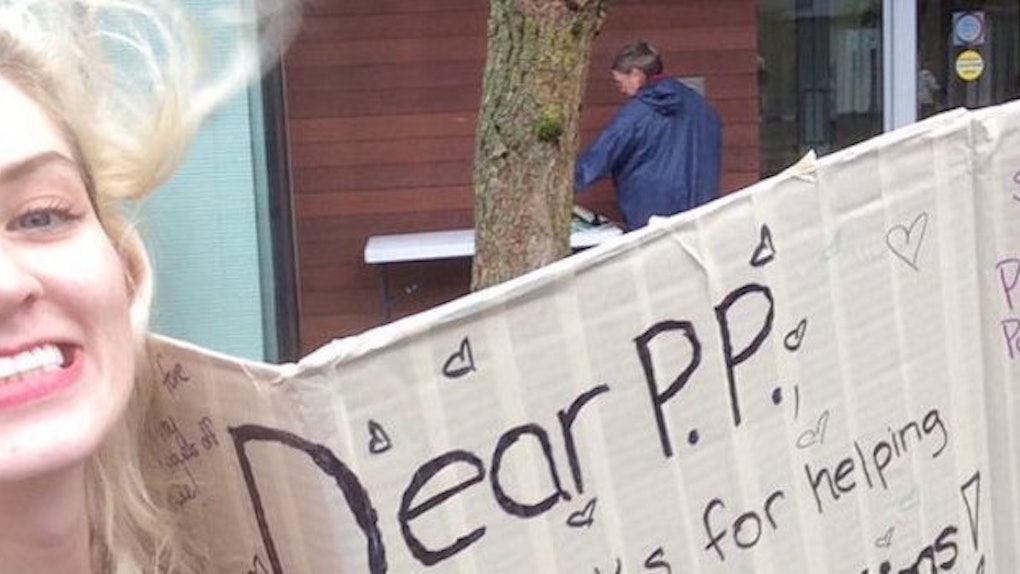 Mary Numair is the pro-Planned Parenthood feminist icon you should be thanking whatever higher power you subscribe to for being brought into your life.

When Mary, who is an employee at Purringtons Cat Lounge in Portland, saw a woman walking by her lounge with an “Abortion Kills Children” sign, she knew the lady was lost.

Earlier, she noticed several other anti-abortion picketers at Portland's Planned Parenthood down the block, so she decided to do the nice thing and let the lady know she was in the wrong place.

The 29-year-old spoke to the woman going in the wrong direction, but her advice wasn't well received. Mary told Slate,

She said 'No, I need to stand here.' I said, 'F*ck this shit,' went back inside, and started making my sign.

Mary said the sign, crafted out of cardboard and masking tape, was made as an homage to when she was uninsured, in her early 20s and suffering from chronic yeast infections.

Obviously, her arrival to the rally didn't go over super well. She said,

In my first 30 seconds of walking out there, I did get called a whore. One woman was shaking her head. I knelt down to her kid and said, 'Do you know about yeast infections?'

After 30 minutes, a relentless Mary broke up the entire protest thanks to her chanting, “Yeast Infections!” and doing some pro-choice acrobatics. She said she even had a religious leader form a prayer circle out of protestors for her.

This isn't the last time anti-Planned Parenthood groups will see Mary. She plans on hitting up more protests in the future with bigger signs. She even put out a call for help, saying,

If someone wants to help me make a giant wooden labia, that would be great.

SOMEONE GET THIS WOMAN A GIANT WOODEN LABIA!