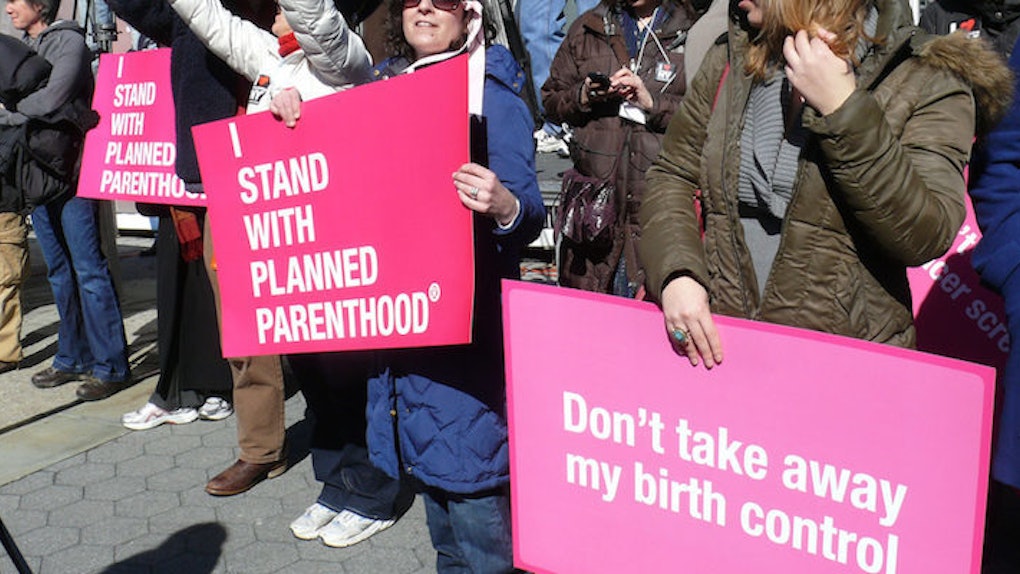 That's pretty strange, because Planned Parenthood's stated mission is “to promote a commonsense approach to women's health and well-being.”

Few healthcare providers have been the target of such vitriol – in public, in private, at debates, on social media, and at clinics around the country. For years, protesters have marched outside of Planned Parenthood facilities across the US, holding anti-abortion signs and antagonizing women as they walk inside for their appointments (appointments that include potentially life-saving Pap smears, mammograms, and STD checks).

For decades, clinics have been set on fire, bombed, and attacked. And last week, a gunman opened fire at a Colorado Springs clinic, killing three people and wounding several others.

The shooting was the latest reminder that some anti-abortion advocates have turned Planned Parenthood into the enemy, making affordable health care for women a dangerous proposition.

Rosanna Cacace, a health educator at Planned Parenthood Pasadena and San Gabriel Valley in California, says, while she feels her community is supportive of Planned Parenthood, she's aware of the potential threats. Cacace says,

I just don't engage. If I don't feel safe I let the right people know.

Founded in 1933, Planned Parenthood Pasadena and San Gabriel Valley is one of the oldest affiliates in the country. They've expanded since the early years and say they've seen a 600 percent growth in patient volume since 2002.

2015 has been a rough year for Planned Parenthood...

Over the summer, an anti-abortion group called The Center For Medical Progress (CMP) released secretly recorded videos that portrayed Planned Parenthood as a sinister organization trading in “baby parts.”

Some thought the heavily edited videos were “shocking” evidence of unethical, immoral practices. Planned Parenthood spokesman Eric Ferrero countered that they donate tissue for scientific research “with full, appropriate consent from patients and under the highest ethical and legal standards.”

There's nothing illegal about it, but the topic of abortion can stir up some intense emotions. It can spur a group to release inaccurate videos, or a gunman to start shooting.

Julianne Hines, VP of External Affairs at Planned Parenthood Pasadena and San Gabriel Valley, says she found out about the CMP videos the way the rest of the public did – online, the day they were released. She says of the videos,

We've been down this road before. It's another Tuesday morning at Planned Parenthood.

Hines wasn't being flippant about the attacks (real or virtual) that Planned Parenthood has experienced over the years. But she does touch on the very real fact that the organization has been under fire for decades, mainly due to the fact that some facilities offer abortion services.

And the attacks seem to be getting more serious. The topic is once again center stage, especially with a presidential election just around the corner.

Hines says, 90 percent of their services are preventative, which means birth control, cancer detection and screenings, domestic violence awareness, and sex education. Additionally, about 10 percent of their patients are men.

Hines adds, the Pasadena clinic has been “widely embraced by the community because we've been here so long.” After the CMP videos were released and a few protesters marched outside the Pasadena location, a resident in the neighborhood put up a sign in the window of their house which read, “Planned Parenthood saved my life.” It didn't stop the protesters from marching, though.

The threat to defund Planned Parenthood is very real, especially in battleground states like Texas. Nancy Northup, the president of the Center for Reproductive Rights, said in an interview with Lena Dunham and Jenni Konner's newsletter Lenny, she's been told by healthcare providers in Texas that they are “seeing an increase in women buying Misoprostol on the black market and self-inducing.”

Planned Parenthood means so much more to its patients…

Sandra*, a Brooklyn-based aesthetician, turned to Planned Parenthood several years ago when she learned that she was pregnant. She was broke. She was an alcoholic. She knew it was dangerous for her to have a child. She says Planned Parenthood staffers counseled her, but didn't pressure her. She says,

I knew they would lead me in the right direction if I said I wanted to keep it. But I didn't want to have a poverty-stricken child.

Sandra finally got sober years later after more than a decade of drinking and drug abuse, but says she's thankful that she had the option to turn to Planned Parenthood since she wouldn't have been able to afford a safe abortion otherwise. The decision was hers, and she doesn't regret it.

That decision is hard for some to understand. Still, Cacace says,

You shouldn't be making up other people's minds. Politicians should never be the ones making medical decisions for women or for men.

Samantha*, a mother of two in Southern California who describes herself as “a pro-life believer,” says,

I never looked ill on Planned Parenthood because they offer [abortions] to women. Mostly because they do a lot of good as well.

She's not against abortion if the mother's life is threatened or in cases of rape, she says, and she herself turned to Planned Parenthood during college when she wasn't able to afford birth control.

For all the other things they do and all the good that comes from them. Just think, where would these girls go and what awful procedures would they have done that could potentially kill them if they couldn't go to Planned Parenthood? Think of all the babies that would be left in dumpsters after carrying them full term.

Emma*, a Canadian film executive who moved to the US several years ago, recalls taking her roommate to Planned Parenthood for an abortion and having a frightening revelation as she sat in the waiting room, looking at the other women in the room.

Her roommate had just been diagnosed with cancer when she found herself pregnant and just about to start chemotherapy. She says,

The idea of all those people who were in that room for that difficult task NOT having anywhere to go with the problems they were dealing with was… terrifying.

Abortions are just one service provided by Planned Parenthood, and it's hard for some people to accept the fact that they're helping and educating so many other women and men when it comes to sexual health.

Cacace says she welcomes an open dialogue with the public – one that's constructive and respectful, not threatening or violent. “We don't believe in working in silos,” she says. “We look to be open partners in communication.”

That seems to be easier said than done. As Samantha said, it's “complex” for some people. And for others it's pretty simple: Leave Planned Parenthood alone, give women a choice, and push for safe and affordable healthcare. And for those like Cruz and Bush who worry about all those tax dollars going to fund Planned Parenthood, Hines says they've received about $4 million through a multi-year capital campaign which helped Planned Parenthood expand services and locations in 2012.

The recent shooting in Colorado is a brutal and sad reminder that debates about Planned Parenthood can result in senseless violence, and that so many people are unable to accept the fact that the clinics are vital for so many women – and men. People who might be forced to undergo dangerous procedures or, as Northrup explained, get drugs like Misoprostol on the black market and risk their lives if they don't have access to safe, affordable healthcare.

Planned Parenthood gets a dose of pop culture…

Tonight, the millions of people who tune into Scandal every Thursday night learned that our rights to reproductive health care are under attack. Never one to shy away from critical issues, Shonda Rhimes used her platform to tell the world that if Planned Parenthood lost funding for contraception counseling, STI testing, cancer screenings, and safe, legal abortion — millions of people would suffer. And this episode wasn't the first time one of Rhimes' characters had an abortion, yet tonight we saw one of our favorite characters make the deeply personal decision that one in three women have made in their lifetime. We applaud Shonda Rhimes tonight — and every Thursday night – for proving that when women are telling our stories, the world will pause and watch. We just hope those in Congress — and throughout the nation — who are steadfast on rolling the clock back on reproductive health care access are taking note.

Nearly 20 years ago, way before "Scandal," Laura Dern played a drug addict named Ruth Stoops who finds herself at the center of the abortion debate when advocates from both sides of the fence try to convince her to take their side in the movie Citizen Ruth. It's a dark comedy, and it perfectly captures the complexity that Samantha – the self-described “pro-life believer” who stands with Planned Parenthood – talked about.

Everything turns out OK for Ruth in the end (that is, depending on your beliefs), but the question is: Why, two decades later, are we still having the same debates about abortion and a woman's right to choose? A debate that has Planned Parenthood in the crosshairs?

For Cacace and Hines, they're going to work every day and making sure the lights at the Pasadena Planned Parenthood clinic stay on, and that patients have access to safe, affordable healthcare.

There are challenges, but we make sure we're adapting and that people aren't falling through the cracks.

*The names of patients have been changed to protect their privacy.