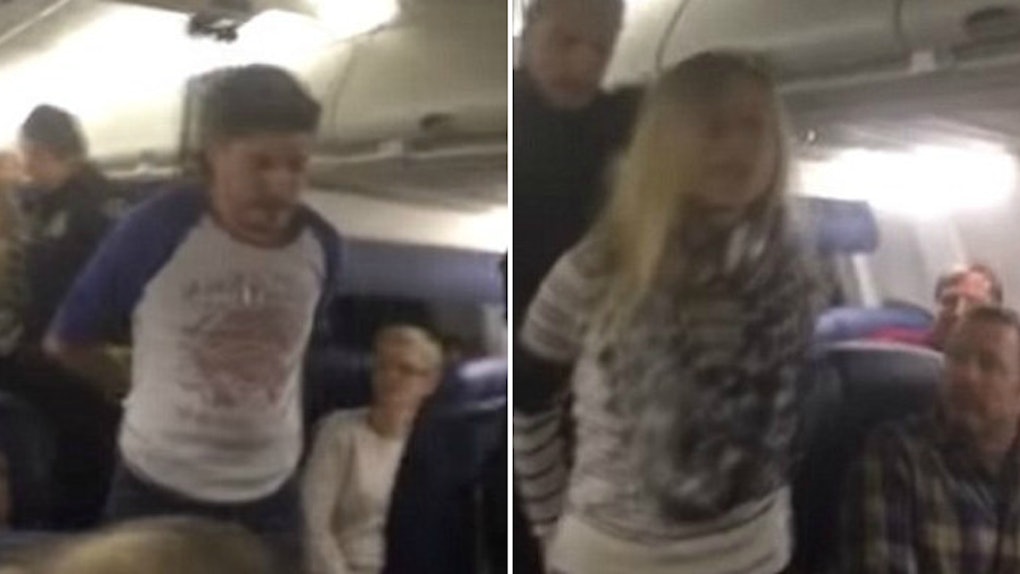 Guy Kicked Off Plane With GF Beats Up Cheering Passenger

The last place you'd ever want to be arrested would probably be on an airplane.

Not only are your checked bags going to get lost in the chaos, but your chances of making it to your destination on time are incredibly slim. In other words, don't cause drama on your flight home after the holidays.

And don't do this:

I bet 35-year-old Blake Adam Fleisig will agree. The Citibank big shot who serves as the company's Vice President of Internal Audit Treasury Finance was arrested on December 28 after fighting with Delta's airline crew.

Fleisig and his 36-year-old girlfriend Anna Christine Koosmann had been aboard Delta flight 2565 on Wednesday when the couple got into a fight with the flight crew who allegedly tried to stop her from using the restroom.

Of course, the flight crew had good reasoning. Koosmann had been attempting to use the restroom twenty minutes after the plane took off from Minneapolis-St. Paul International Airport at around 6:20 pm.

If you've ever been on an airplane, you know the pilot must first announce when it's safe to get up and use the restroom after takeoff. Apparently, this couple didn't get the memo.

According to DailyMail.com, Anna Christine Koosmann "became aggressive" after being told to return to her seat by a Delta flight crew member. Delta also stated that the couple was extremely disruptive as a result of the incident.

The airline released a statement revealing that Koosmann and Fleisig "refused to follow crew instructions, became aggressive and created a disruption in the cabin."

After causing enough drama to have the plane diverted from its route to Los Angeles and landed back in Minneapolis, Fleisig and Koosmann's bizarre behavior prompted police to respond and escort them from the aircraft.

As the couple were being removed from the plane, passengers began to cheer and record the incident on their smartphones. That's when Blake Adam Fleisig reportedly attacked a passenger despite police presence.

Police repeatedly told Fleisig to "stop" and "stay down."

As for his girlfriend, she was eventually escorted off of the aircraft along with Fleisig. On her way out, she cursed at the police and kept asking why she was being arrested.

Fleisig and Koosmann were both charged with disorderly conduct and were also blessed with two priceless mugshots they'll cherish forever.

Oh, and that flight to Los Angeles? It was nearly three hours behind schedule. Safe travels this holiday season, everyone!

Check out the incident in the video above.